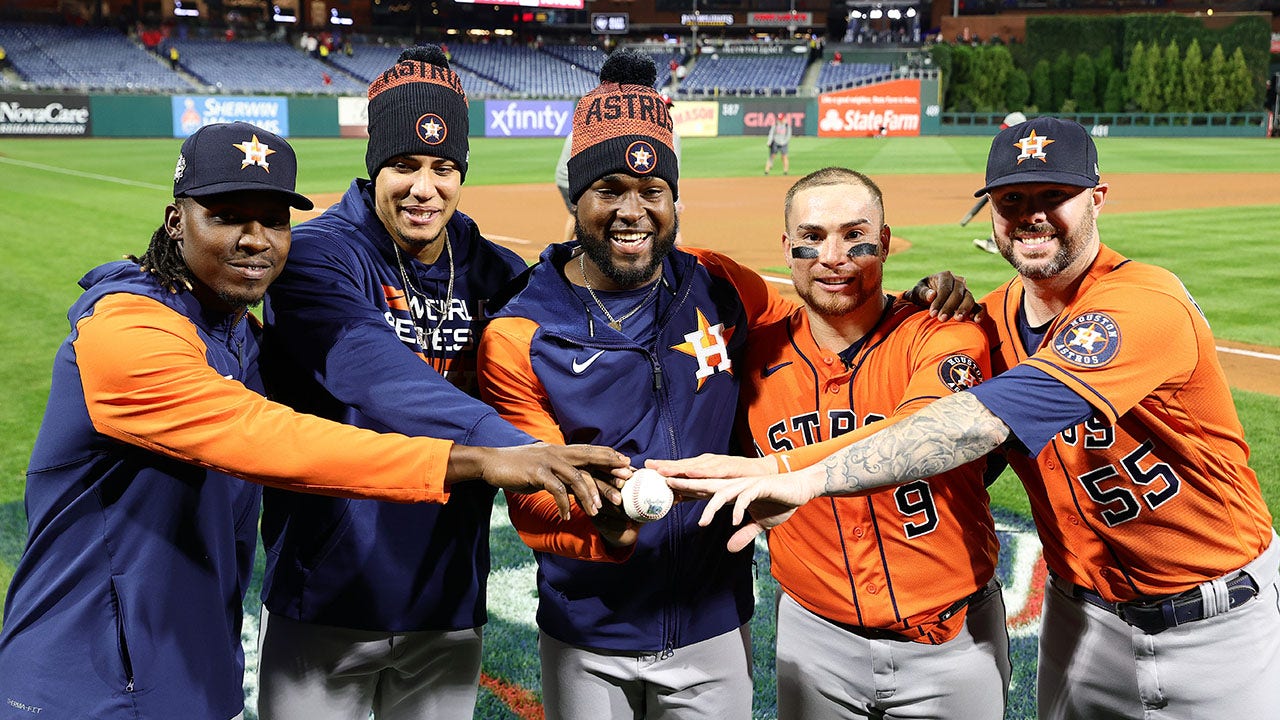 For the first time in MLB postseason history, there has been a combined no-hitter.

Houston Astros’ Cristian Javier, Bryan Abreu, Rafael Montero, and Ryan Pressly combined to no-hit the Philadelphia Phillies in their 5-0 win in Game 4 of the World Series, tying the series at two.

It was the third no-hitter in postseason history – two of which have been thrown at Citizens Bank Park – and the second thrown in the Fall Classic.

Rafael Montero #47, Bryan Abreu #52, Cristian Javier #53, Christian Vazquez #9 and Ryan Pressly #55 of the Houston Astros pose for a photo after pitching for a combined no-hitter to defeat the Philadelphia Phillies 5-0 in Game Four of the 2022 World Series at Citizens Bank Park on November 02, 2022 in Philadelphia, Pennsylvania.
(Tim Nwachukwu/Getty Images)

Don Larsen threw the first postseason no-hitter in on Oct. 8, 1956 in Game 5 of the World Series as a New York Yankee against the Brooklyn Dodgers. In Game 1 of the 2010 National League Division Series on Oct. 6, Roy Halladay, then a member of the Phillies, no-hit the Cincinnati Reds.

Javier got the start for the Astros, and in his 97 pitches, he tossed six no-hit innings while striking out nine and walking two. In his last eight appearances (spanning 41.0 innings), he has allowed just two earned runs (0.44 ERA).

Javier also started the Astros’ combined no-hitter from June 25 against the Yankees in the Bronx. That afternoon, Javier threw seven no-hit innings against the Bombers, while Hector Neris and Pressly got the final six outs.

Abreu was the next man out of the pen, and he struck out all three batters he faced in the seventh. Dusty Baker then brought in Montero, and he retired the side in the eighth.

Ryan Pressly #55 and Cristian Javier #53 of the Houston Astros celebrate after defeating the Philadelphia Phillies 5-0 in a combined no-hitter in Game Four of the 2022 World Series at Citizens Bank Park on November 02, 2022 in Philadelphia, Pennsylvania.
(Sarah Stier/Getty Images)

Then it was an easy choice for Baker, as he brought in the closer Pressly. He struck out Brandon Marsh to start the bottom of the ninth, but walked Kyle Schwarber (which was the Phillies’ first baserunner since the third inning). But Rhys Hoskins flied out, and J.T. Realmuto grounded out to third to end it.

It’s quite ironic that the no-hitter comes just 24 hours after Game 3 starter Lance McCullers was thought to be tipping pitches – he allowed five home runs in the Astros’ 7-0 loss on Tuesday, and videos circulated of what may have been a tell with his legs.

But on Wednesday, the Phillies looked clueless all night.

The Astros had some early rallies, but ultimately couldn’t cash in as their scoreless streak reached 16 innings. But in the fifth inning, they had had enough. The Astros loaded the bases with no outs and Yordan Alvarez at the plate. That ended Aaron Nola’s night, but Jose Alvarado’s first pitch hit Alvarez, bringing in the first run of the game. The next batter, Alex Bregman, drove in two runs with a double. Kyle Tucker’s sac fly made it a 4-0 game, and Yuli Gurriel drove in another run with a single.

The win forces a Game 6, which will be played on Saturday night in Houston. Game 7, if necessary, would be played Sunday night. It also gets Houston to avoid what would have been a devastating 3-1 hole.

Justin Verlander, notorious for struggling in the World Series (6.07 ERA in eight appearances), will get the ball for Game 5 on Thursday in Philly at 8:03 p.m. ET. The Phillies will match with Noah Syndergaard.