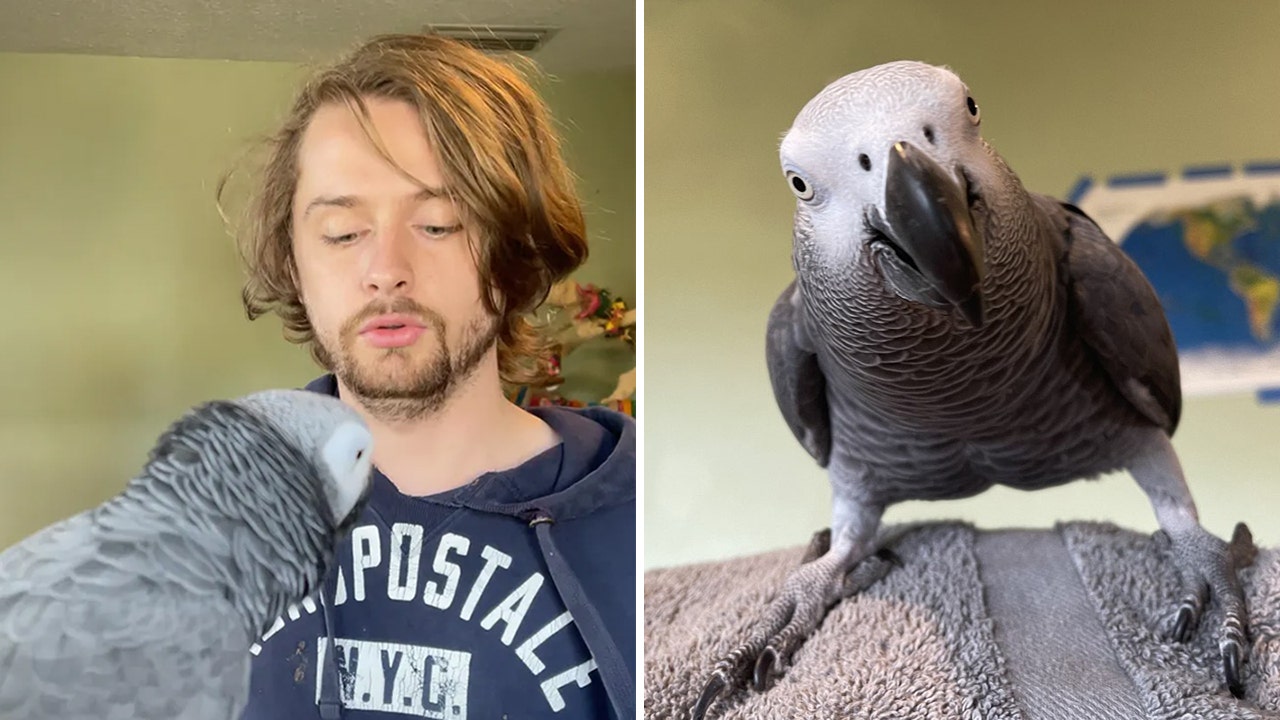 Meet a feathered fellow who is lighting up the internet with his verbal abilities and intelligence: Apollo, an African grey parrot.

He is two-and-a-half years old, and has feathered family members as well as human ones; Mason and Lacey also own two white-bellied caiques named Soleil and Ophelia, the couple told Fox News Digital by email.

The internet wants more of Apollo, it seems: The Instagram account apolloandfrens showcases the talents of Apollo and has some 142,000 followers, while a TikTok account for Apollo’s incredible feats of intelligence, ApolloandFrens, has racked up nearly 940,000 followers as of right now.

THE BALD EAGLE: A BRIEF HISTORY OF THE GREAT CONSERVATION SUCCESS STORY OF AMERICA’S BIRD

In many of their videos shared on social media, Mason can be seen asking Apollo to identify objects or perform other tasks and is enthusiastic when Apollo gets them right.

And when he doesn’t — the bird always gets a second chance.

Apollo, an African gray parrot, is popular on social media, with multiple accounts following his daily life and growing list of skills and abilities.
(@apolloandfrens )

Apollo can distinguish between metal and glass — clearly pronouncing each word — and he knows colors, too, among other skills.

“We’ve had him since he was eight months old,” Mason told Fox News Digital.

PETS QUIZ! HOW WELL DO YOU KNOW THESE SURPRISING FACTS ABOUT DOGS, CATS, BIRDS, RABBITS AND MORE?

Working with Apollo and testing his boundaries is not a light-hearted hobby for Mason and Lacey. It’s a serious and even scholarly passion.

“We use the ‘model/rival’ program of training,” said Mason.

“It was originally published by German ethologist Dietmar Todt, but was popularized by Dr. Irene Pepperberg [a scientist noted for her work in field of animal cognition] through her work with Alex, her African grey.”

“As a more passive means of training,” noted Dalton Mason of Florida, “we talk with him as if he were a member of the household.”
(@apolloandfrens )

Operant conditioning — offering a good outcome in response to a desired behavior — is usually attributed to psychologist B.F. Skinner, according to SimplyPsychology.org.

Apollo can often be seen on social media receiving the reward of a pistachio when he correctly performs a task.

“Parrots are much better at replicating human speech due to their anatomy.”

“As a more passive means of training,” noted Mason, “we talk with him as if he were a member of the household, [almost] as if he were our young son.”

Explaining that the abilities of this species are “practically unknown,” Mason said the couple treats Apollo “much like a child” to see “how he compares cognitively.”

AS BALD EAGLE MAKES MIRACULOUS COMEBACK IN US, AUTHOR REVEALS THAT HUMANS ‘REDEEMED OURSELVES’

He added, “These parrots are equal in size to crows, have a similar diet and a complex social structure — so one can assume they are about as intelligent.”

“Parrots, however, are much better at replicating human speech due to their anatomy,” he noted.

Dalton Mason (left) trains Apollo — while Apollo checks out the camera on the right. “Apollo is ‘bonded’ with us, though he prefers Dalton,” said Victoria Lacey of their beloved pet.
(@apolloandfrens )

Parrots talk by “modifying the air that flows over the syrinx to make sounds,” explains Exotic Direct, an exotic pet insurance company that also shares facts about exotics on its website.

“The syrinx is located where the trachea splits into the lungs,” the site notes.

The site also notes, “Parrots, particularly African greys and members of the Amazon family, are particularly good at imitating human words and sounds.”

“Apollo is ‘bonded’ with us, though he prefers Dalton,” said Lacey.

“He is also very close with our other parrots and many of our friends and family.”

Parrots are undomesticated, unlike dogs and cats, Mason said, “though they naturally live in large flocks with a complex social hierarchy and communication system.”

“In practice, they do not ‘fit in’ with human social structures or bond as well as dogs,” he said.

“They are far more social than cats, which as solo animals lack the social programming at the genetic level.”