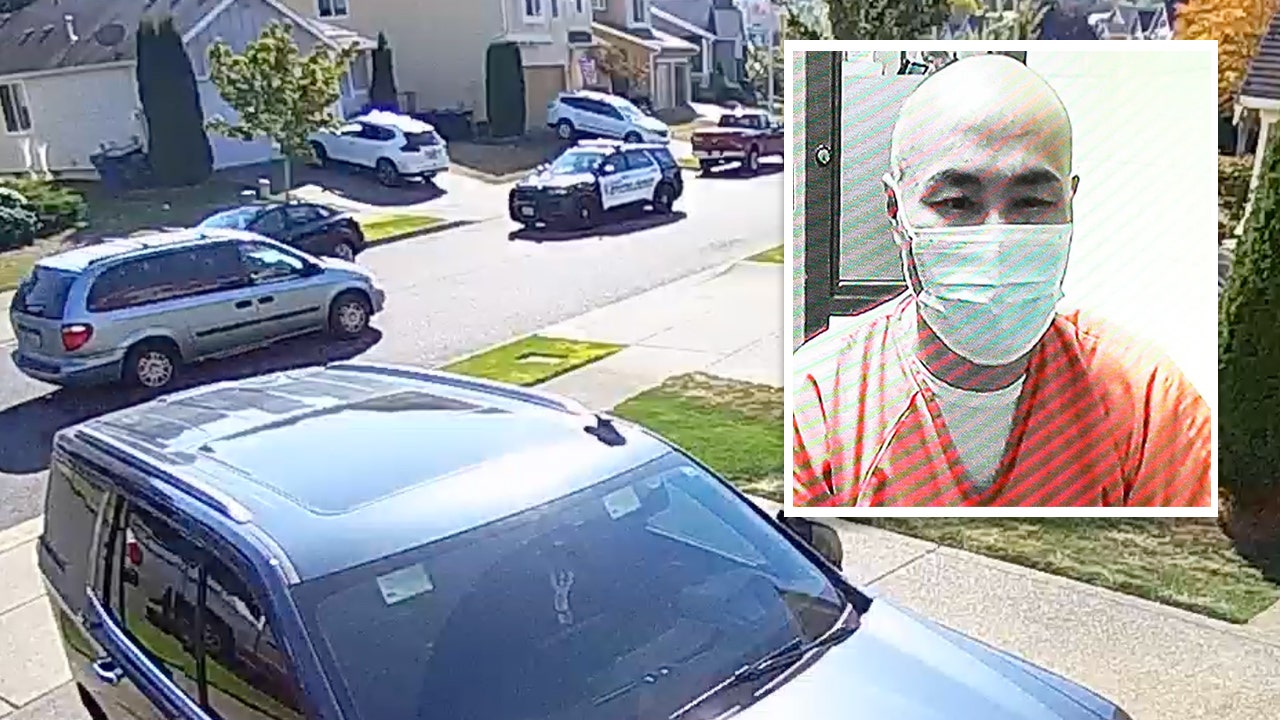 WATCH THE SURVEILLANCE VIDEO ABOVE

FIRST ON FOX: The suspect vehicle speeds past a responding officer, who is soon heard on the open 911 line arriving at a home just moments after a violent kidnapping that led to a Washington woman being buried alive for hours in the woods outside town.

Chae An, 53, allegedly attacked his estranged wife Young An, 42, in a dispute over money amid their contested divorce, tied her up with duct tape, stabbed her and buried her alive in a 19-inch-deep hole in the woods, according to police in Lacey.

One camera caught him speeding past a police car – with the victim tied up with duct tape in the back, police confirmed to Fox News Digital.

LISTEN TO THE HARROWING 911 CALL:

The cruiser was on the way to Young An’s home in response to a muffled 911 call, also obtained by Fox News Digital, which had been placed by the hogtied and gagged victim through her Apple Watch. The responding officer was unaware at the time of the suspect vehicle’s description or that there had been an abduction, a Lacey Police Department spokeswoman said, and at the end of the recording, his voice can be heard on the line as he enters the home.

“The dispatch was an ‘unknown trouble call,’” Sgt. Shannon Barnes explained Wednesday. “So he had no information about anything he was walking into.”

He walked into Young An’s home just minutes after the alleged abduction. Her husband allegedly smashed the watch off her wrist with a hammer, according to court documents, but the call remained active.

Police documents allege he got into a fight with his estranged wife over money he expected to lose in their ongoing divorce battle. On Oct. 16, according to investigators, he allegedly ambushed her at home and tied her up with duct tape.

Chae An pleaded not guilty in court on Tuesday, Nov. 1, 2022, to attempted murder and other charges after allegedly abducting, stabbing and burying his wife alive.
(Derek Shook for Fox News Digital)

When he left the room – possibly to move the van inside and conceal the abduction – she called 911 from her Apple Watch and sent emergency alerts to her children and a friend. The jarring recording is full of screams, sobs and randomly mashed keys.

Despite Young An being bound and gagged, unable to articulate words, the dispatcher realized something was obviously wrong and sent officers to the home.

“I’m gonna get help started for you – hold on for a second,” the dispatcher says, in response to muffled screaming. She reads out Young An’s address, asking if that’s where she is and if she’s in trouble.

Through the gag, the victim says something that sounds like “Yes.” The dispatcher attempts to reassure Young An throughout the call. “I’m still here,” she says, promising to stay on the line until officers arrive.

Young An was abducted from her home in Lacey, Washington on Oct. 16, police say.
(Derek Shook for Fox News Digital)

Another angle, recorded by a home security system at a neighbor’s house across the street, showed the man storming out of a garage door, pulling a van inside. He is suspected of loading her into the back of the vehicle behind closed doors. Several other cameras in the neighborhood helped police track his movements.

Chae An allegedly drove his wife into the woods about seven miles away, threw her in a shallow grave and covered her with dirt and fallen branches. At some point, prosecutors allege, he stabbed her in the breast.

Hours later, after sundown and with Chae An inside his van, Young An crawled out of the hole, ran through the woods for a half hour and finally found a good Samaritan who called 911.

The first deputy on scene found her cowering behind a shed.

“When Young realized the deputy was law enforcement, she sprinted at them, screaming and crying for help,” according to the probable cause statement. “She grabbed onto the deputy frantically and said, ‘My husband is trying to kill me. Help me.’”

Police found Chae An in the woods about six hours later and has been held without bail since, near the shallow grave he is accused of throwing his wife into. Police found fragments of the Apple Watch stuck to duct tape recovered at the scene.

READ THE PROBABLE CAUSE STATEMENT:

Lacey police had previously responded to the home in 2021, resulting in Chae An’s arrest. He was subjected to an order of protection, which the court later rescinded upon his wife’s request.

At the time of the crime, according to court documents, he visited the house about once a week to do laundry.