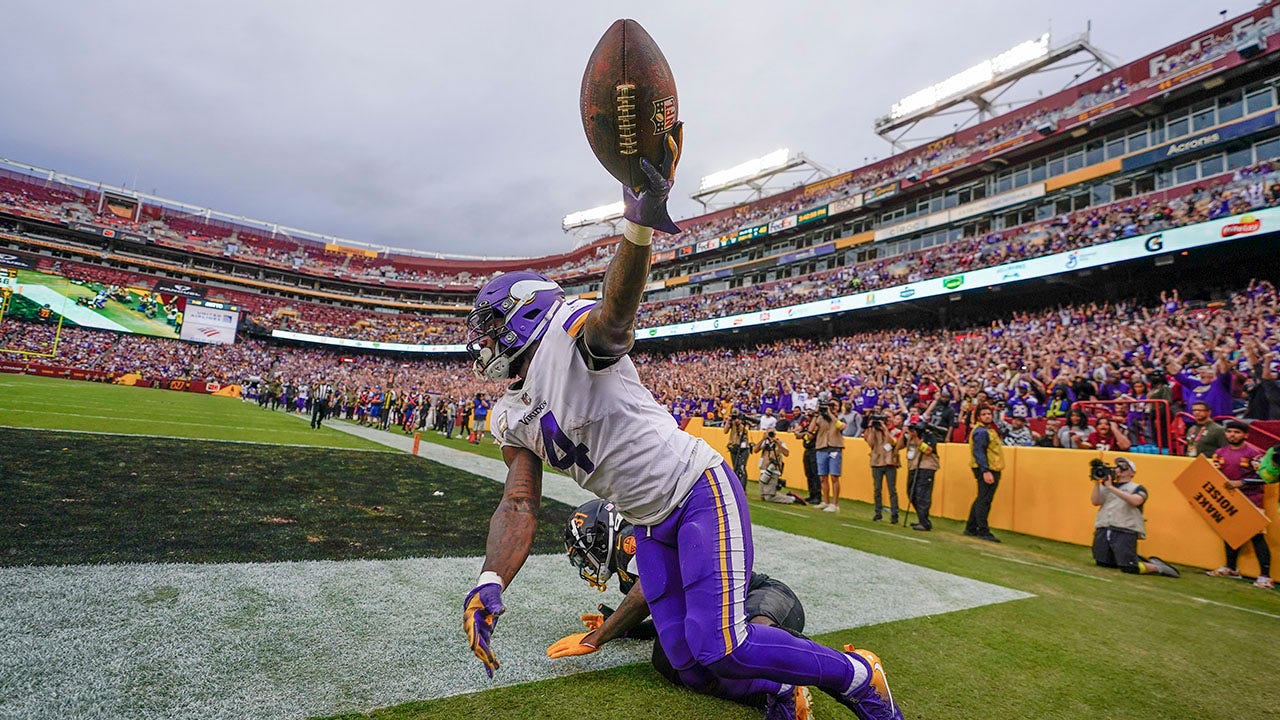 Kirk Cousins threw two touchdown passes, Harrison Smith picked off Taylor Heinicke to set up the tying score, and the Minnesota Vikings came back to beat the Washington Commanders, 20-17, Sunday and extend their winning streak to six.

Playing his first game at Washington as a visitor, Cousins rebounded from an interception at the end of the first half and popped back up after one of several big hits he absorbed to lead a 68-yard drive that ended with a field goal by Greg Joseph.

Washington Commanders cornerback Danny Johnson (36) and his teammates react after Johnson intercepted a pass during the first half against the Minnesota Vikings, Nov. 6, 2022, in Landover, Maryland.
(AP Photo/Julio Cortez)

Smith’s interception midway through the fourth quarter gave the Vikings the ball in the red zone. Cousins connected with Dalvin Cook on a 12-yard TD pass, which was one of his best throws of the game and compensated for some earlier inaccuracies. He finished 22 of 40 for 265 yards.

After an unnecessary roughness penalty on the initial field goal attempt allowed Minnesota to run more time off the clock, Joseph connected from 28 yards out with 12 seconds left to keep the win streak going.

Justin Jefferson caught Cousins’ first TD pass in the first quarter and came down with a 47-yard completion in the fourth. Jefferson finished with seven catches for 115 yards as the Vikings (7-1) extended their lead atop the NFC North and avoided what would have been their first loss since Sept. 19 at Philadelphia.

Washington Commanders quarterback Taylor Heinicke (4) gets hit from behind by Minnesota Vikings linebacker Za’Darius Smith (55) during the first half, Nov. 6, 2022, in Landover, Maryland.
(AP Photo/Nick Wass)

Heinicke’s magic ran out on the interception after he threw two touchdown passes, including an inexplicable heave into triple coverage that Curtis Samuel came down with after a Minnesota defender ran into an official, and had the crowd chanting his name. He could not lead another game-winning scoring drive, and the Commanders (4-5) had their winning streak snapped at three.

After Antonio Gibson gave Washington strong field position to start the second half with a 45-yard kickoff return, Heinicke provided one of the highlights of the game with one of the weirdest plays of the NFL season.

Heinicke made the risky decision to heave the ball into the air from midfield like a Hail Mary, and it looked like a certain interception until Minnesota safety Camryn Bynum collided with back judge Steve Patrick, who was trying to get out of the way. Samuel got in front of Smith and cornerback Patrick Peterson and made the catch at the goal line.

The Vikings tried to get extra points in the final minute of the second quarter, leading 7-3 and with Washington getting the ball out of halftime.

They were in field goal range at the 26 when Cousins tried to connect with Jefferson in the end zone. Instead, the throw banked off Jefferson and into the arms of Washington cornerback Danny Johnson for his first career interception.

Vikings: CB Cameron Dantzler left in the first half with an ankle injury and was quickly ruled out after halftime. He was previously listed as questionable with a neck injury. … DT Dalvin Tomlinson missed the game with a calf injury.

Minnesota Vikings running back Dalvin Cook (4) holds up the ball after making a touchdown catch against the Washington Commanders during the second half on Nov. 6, 2022, in Landover, Maryland.
(AP Photo/Julio Corte)

Commanders: Travel to Philadelphia to face the Eagles on Monday, Nov. 14.