TUCKER CARLSON: Media has done everything it can to minimize the economy and crime 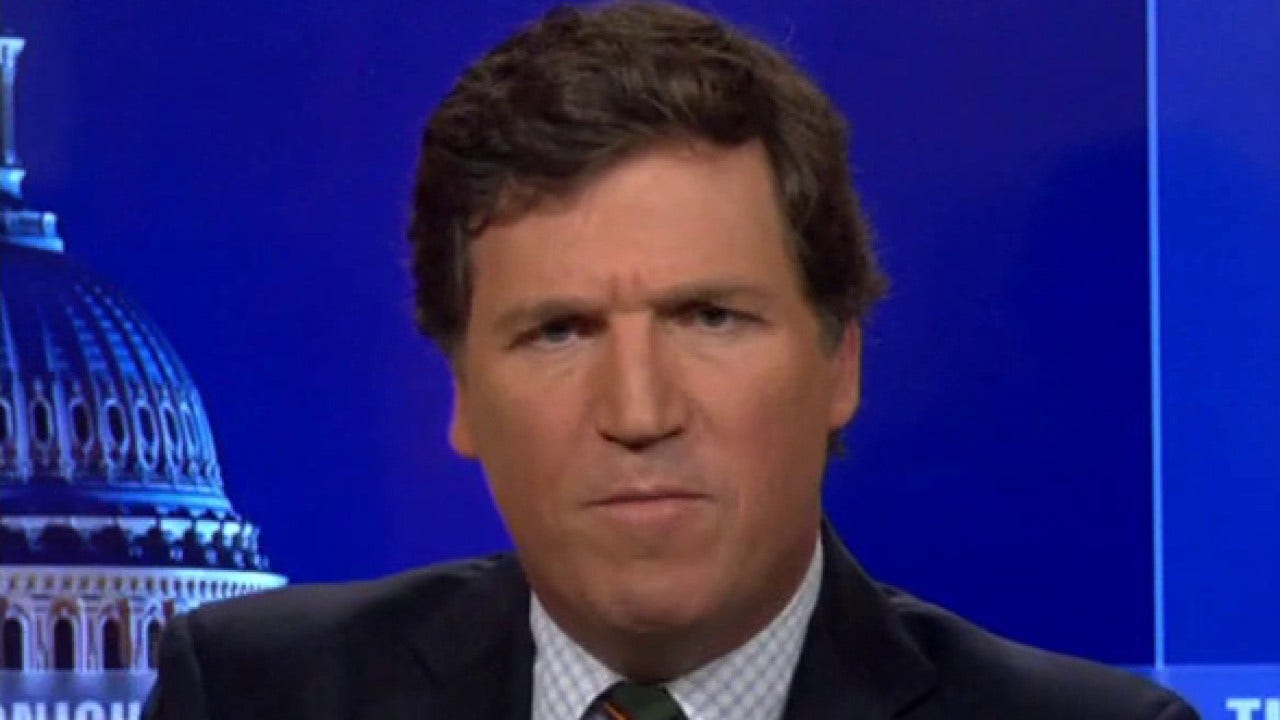 The good news stories just keep coming. Here’s one of them. When the Supreme Court overturned Roe v. Wade this past June (You remember this) Democrats howled in outrage for weeks. Every hour on MSNBC sounded like a plot summary from The Handmaid’s Tale. Theocracy rising! They’ll be burning witches. Liberals seemed genuinely upset and probably most were, but on some level, not very deep beneath the surface, the people who run the Democratic Party weren’t upset at all. They were thrilled.

Here finally was an issue for them to run on in the midterm elections. It was an issue perfectly suited to a party that had nothing else to talk about. Are they going to brag about Joe Biden? I don’t think so, so it’s going to be abortion. They’re going to take your abortions away. That was the Democratic message for the midterm elections, the ones that are coming up in just a few days, but there was a problem with the messaging.

COVID had just ended and people, not being entirely stupid, still remember that this very same Democratic Party, the same people, had forced the entire population to wear paper masks like children and then to take the shot as a condition of going outside. So, women have the right to control their own bodies? They used to tell us that and then they fired thousands of nurses for refusing to submit to an experimental vaccine.

The phrase “my body, my choice” had been, as we say in the news business, overtaken by events. Clearly, Democrats needed a new slogan, a new way to talk about abortion. Unfortunately, nobody could think of one. “Your body, my choice?” No, that wouldn’t work. It was too real. In the end, liberals just dusted off the same old talking points and pretended like COVID never happened. Watch.

Yeah, it would be a shame if states got to control people’s bodies, like telling people what to wear on their faces or what drugs they have to be injected with. That’d be like The Handmaid’s Tale! Theocracy! Next, they’ll be trying to control what you read on social media. Oh, wait. It’s all pretty amusing and the good news is that for once, lines this preposterous are not working. Abortion politics is a total fixation of Democratic donors. It’s the main thing they care about. Why is that, by the way? It’s a religion. It’s a child sacrifice cult, but not everyone else feels that way, even Democrats.

As The Daily Caller just reported, polls show that “abortion is not a top priority for female voters.” In fact, “most women support abortion limits that would have been considered unconstitutional under the Roe v. Wade precedent.”

Oh. So, it looks like yelling about abortion is definitely not going to be enough to keep Democrats in control of the Congress. Are you surprised by that? No, of course not. You live here. How did the highly-paid and admittedly pretty smart strategists who figure out what the issues are in the Democratic Party so misjudge this one?

Well, they did what a lot of us do. They forgot that not everyone is like them. Not everyone in America is as miserable as they are. In fact, there are still plenty of people in this country, believe it or not, who have happy marriages. There are still people who love their kids and their grandchildren, still people who consider babies a blessing, not just an obstacle to better vacation.

Now, some of those people, maybe a lot of those people, might still consider themselves “pro-choice,” but they’re hardly pro-abortion. They don’t think abortion is a positive good. It’s not. They don’t consider it liberation. and they definitely don’t see abortion, as Janet Yellen recently claimed, as the answer to our national economic problems. She said that.

Here’s how it works: Janet Yellen gets rich giving speeches to the companies she regulates. That’s corruption, but she’s never charged. She’s still free. In fact, she’s the treasury secretary. And you? You get poorer, but we have a solution. You just need to have more abortions. That’s what she said. That’s the message they’re selling and maybe not surprisingly, it doesn’t work. That’s not what voters want. So, what do voters want? What do they care about?

WHITE HOUSE GROUNDSKEEPER HAS SERVED PRESIDENTS, FAMILIES AND PETS IN 50 YEARS ON THE JOB

Well, if you look at the polls, they care about exactly what you’d expect them to care about, which is the quality of their own lives. They care about the economy and they care about crime. This is very obvious. You don’t even need to look at polling to know it, but every poll shows it with maximum clarity. How does the media respond to this? Well, of course, doing their job. they’ve done everything possible to minimize both issues, the economy and crime.

They’ve told us the economy is not in a recession. No, it’s not. One, of course, by every measure, it is very much in a recession. And on crime, they’ve told you, don’t even talk about it. Only racists worry about crime. Racists! The one thing you don’t want to be called.

How should Republicans respond to that? Well, we have video evidence. Here’s Kari Lake, who’s running for governor in Arizona, deftly swatting away a reporter’s claim that somehow people of color like crime. Watch this.

REPORTER: A lot of people of color feel like they’re being targeted.

REPORTER: I mean, if you look at surveys.

LAKE: Which surveys? I’m happy to look at those stats because I will tell you this, that I talk to people of color. I talk to all Arizonans. They’re all concerned about the crime. Just because their skin isn’t the same color as yours, doesn’t mean you want your kids to be walking down the street in an unsafe neighborhood. Every Arizonan wants safety and security in their neighborhood. It doesn’t matter what your skin color is and if you look at stats, you will look and see that police do not target people of color. That is a lie that’s been perpetuated by the left and then spread and disseminated and spread in the media. Check the stats.

but in the end, you don’t need to convince people that crime is real because they live here, too. Crime is everywhere.

In New York, crime on public transit is up more than 40% and not just pickpocketing. Now, this video that we’re about to show you is not an aberration necessarily. It just so happens this was caught on tape, but this is exactly the reason that people are afraid to ride the subway. This weekend, a man was pushed onto the tracks. You can guess the motive actually from watching this video, but we know with no warning whatsoever. Here it is.

ALEXIS MCADAMS: 32-year-old David Martin is afraid for his safety after this random attack. He’s in physical and emotional pain as he continues to replay this horrifying moment caught on camera over and over again. In this video, you can see the guy in the yellow hoodie shove him right onto the subway tracks. He zeroed in on the innocent commuter and then charged right at him. Martin ended up in the hospital, just grateful to be alive.

Oh, this random attack. There are a lot of random attacks on the Internet you may have noticed. Are they random? Really? The person who did that is not being sought as a hate criminal. You wonder why.

But the point is, those kinds of attacks didn’t used to happen. Now they’re commonplace enough that you may no longer be shocked by them, but if you live there, you stay off the subway as a result. Crime in Philadelphia is completely out of control. For example, last year, Philadelphia recorded 562 murders.

That is the highest homicide total since 1960. That happens to be the year the city started tracking homicide data. This year in Philadelphia, crimes like robbery with a gun are up 47%. Now, why is this happening? It’s not an accident. None of this is an accident. Crime is rising as a direct result of policies designed to make crime rise and at the same time, any effort by normal people, middle class people, to defend themselves is immediately met with the full ferocity of the state. This is an attempt, of course, to destroy the American middle class. Let’s just be honest about it.

This is crime with a purpose. They don’t want to have this conversation, the people who did this, and that’s why they attack you personally and morally if you bring it up. In Philadelphia, a lot of these crimes can be traced to one man, Soros-backed D.A. Larry Krasner. He’s decided not to charge many robbers with crimes. Arrests and charges for retail theft in Philadelphia have dropped by about 70% over the past four years. In that same period, reports of robberies jumped more than 20%. You see how this works?

If you stop charging people with certain crimes, they commit more of them. That seems like an obvious observation and again, it’s more evidence this is not an accident. Larry Krasner is not an idiot. None of these people are stupid. They’re doing this on purpose. They’re trying to destroy and why are they doing that? Well, we can’t guess as to the motive, but they’re definitely doing it.

When asked about this, how does Larry Krasner respond? Shut up. Racist. Watch.

LARRY KRASNER: We’re just looking at Philly right now in a superheated election cycle where part of the Republican playbook, as you well know, is to point a finger at large diverse cities and say large, diverse cities are lawless. What we see here is the same old playbook, which is about coded and racist messaging. It’s about blaming the biggest city in Pennsylvania with the most diverse population for having the same national struggle that we have with gun violence everywhere.

Voters are getting very tired of this, so tired of it that even some Democrats have started to figure out actually maybe voters don’t want to be shot, raped or carjacked and then attacked morally if they don’t like it.

Kathy Hochul, who is in part responsible for the rising crime in New York, is now running last ditch ads promising to fight crime.

Oh, really, Kathy Hochul, but it’s probably too late for her. She’s losing to a Republican in New York. Pennsylvania is almost as Democratic as New York is, but the lieutenant governor now running for Senate there, John Fetterman, is also losing for the same reasons, we guess. His challenger is Dr. Mehmet Oz.

Tucker Carlson currently serves as the host of FOX News Channel’s (FNC) Tucker Carlson Tonight (weekdays 8PM/ET). He joined the network in 2009 as a contributor.