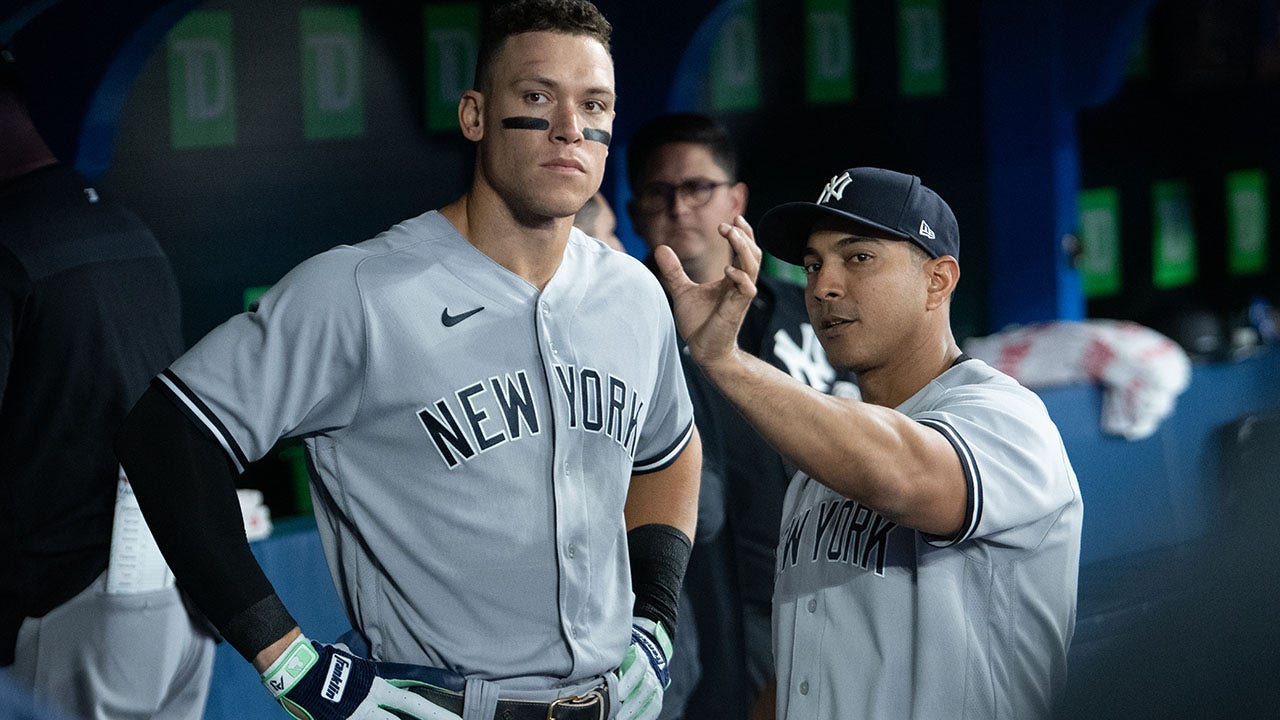 Tom Brady and Aaron Judge chopped it up on the Tampa Bay Buccaneers quarterback’s latest episode of his podcast on Monday night.

While the two talked about mentality in their respective sports, Brady swung for the fences and jokingly attempted to recruit Judge to play tight end for the end of the season as the New York Yankees slugger is set to his free agency once the season is over.

New York Yankees of Major League outfielder Aaron Judge watches the game between the Michigan Wolverines and the Ohio State Buckeyes from the field level at Michigan Stadium in Ann Arbor, Michigan, on Nov. 25, 2017.
(Icon Sportswire)

“You know, obviously having such an incredible year and now on the brink of free agency I was certainly wondering what it would take to get you down here in Tampa to be a tight end for us next year,” Brady asked on the “Let’s Go!” podcast. “So as a free agent, it looked pretty good to me the way he runs, the size, the catch radius, the power, I mean this could be something we could be on to. You were a great high school football player. I think obviously baseball turned out pretty well for you, but I don’t know, maybe this dual-sport athlete thing you might have to look into.”

Judge chuckled and responded he’d only play if he was guaranteed to get looks in the red zone.

“We can get a nice little split contract. We can find a way to work this out. Just give me some looks in the red zone, and I can go off and hit some homers after that. We’ll figure something out nice,” he said. “If Tom’s tossing me touchdowns, I’ll play for free.”

New York Yankees outfielder Aaron Judge (99) reacts in the dugout before the MLB baseball regular season game between the New York Yankees and the Toronto Blue Jays on Sept. 26, 2022, at Rogers Centre in Toronto, ON, Canada.
(Julian Avram/Icon Sportswire via Getty Images)

Judge is listed at 6-foot-7, 282 pounds. He’s taller and heavier than any of the Buccaneers tight ends right now, according to Pro Football Reference data. Kyle Rudolph is 6-foot-6, 265 pounds.

Judge played wide receiver at Linden High School in California and set a school record for touchdowns. But he maintained focus on baseball and put together a pretty nice career so far.

Brady told his co-host, legendary sportscaster Jim Gray, that Judge has the vitals for a decent football player.

“He has all the skills. The size, the speed, the length, strength, incredible power and that twitch he’s got in his swing would carry over nicely to football,” Brady said. “But again, he committed so much time and energy to baseball, and look what’s happened. I’m sure if he committed the time and energy to football he would have incredible success too. But again, he picked the right sport, and he’s proven to everybody what he’s capable of, and it’s been just a spectacular thing to watch.”

Judge will hope to lead the Yankees to a World Series after hitting 62 home runs in the regular season. He’s set for a huge pay day with free agency rolling around.