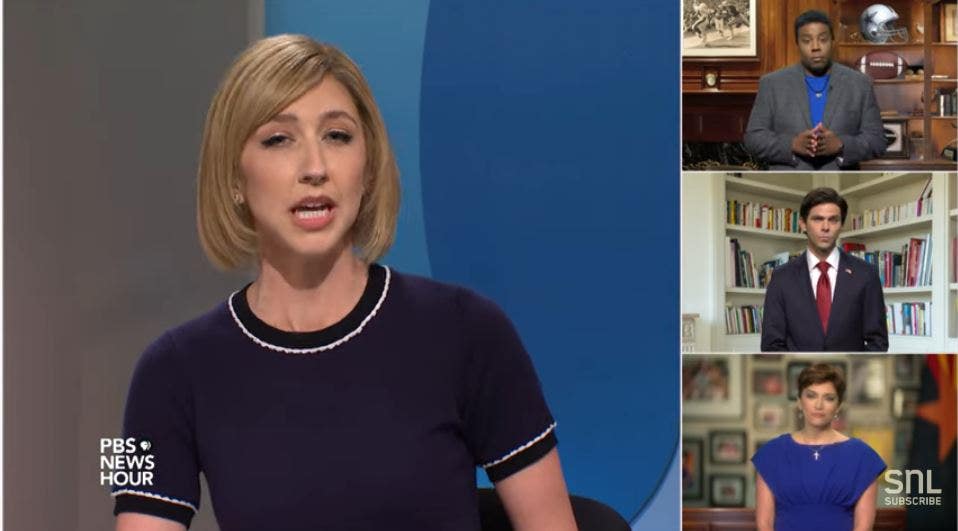 “Saturday Night Live” this weekend took on the rising poll numbers of Republican candidates who don’t have “any political experience” in key states ahead of the Nov. 8 election.

“Hello, Judas, my name is Herschel Walker Texas Ranger, I’m running for president of the United Airlines,” Thompson as the Georgia Senate candidate told Gardner’s Woodruff at the top of the sketch. Thompson’s frequent impression of the former NFL player usually involves him speaking incoherently.

When Woodruff asked him why millions of Georgians were planning to vote for him even though two women are claiming he paid for their abortions and his ex-wife says he once held her at gunpoint, he answered, “Gas.”

After she asked him to elaborate, he said, “I’m fun. Look, if you want to get on the jumbotron at the Falcons game you don’t throw on a cardigan and start making sense. You take your shirt off and you shake your belly around. That’s what I’m doing and people love me no matter what. Like the great Trump Donald said, ‘I can pay for an abortion in the middle of Fifth Avenue and not lose any votes.’”

Gardner’s Woodruff then turned to Oz, who worked overtime on his Pennsylvania credentials, telling her, “My Pennsylvania Phillies are in the world series,” while putting on a Phillies hat with the tag still on. “And I just had a delicious Philadelphia cheese and steak.”

The senate candidate, a retired doctor who has been criticized for his medical advice on his TV show, later began hocking a dubious but “miraculous” drug that he said would make users lose 30 pounds in one day.

He added that he was surprised by his surge ahead of Pennsylvania Lt. Gov. John Fetterman, saying he always knew he would win if he was “honest,” “fair” and if his opponent had a “debilitating medical emergency.” Fetterman is recovering from a stroke he had earlier this year.

Strong, returning to the show following a hiatus, played Lake who told Woodruff, “Great to be with you on your sweet little show of lies.”

Strong’s Lake said she is polling ahead of Arizona Secretary of State Katie Hobbs because she’s “normal” and because she’s “just clicked with many of the wonderful, terrified elderly people here in Arizona, the Florida of the West.”

She said that she’s also a “fighter,” explaining she has “sent back over 2,000 salads” at restaurants in her life, “and I’m not afraid to do the same thing with democracy.”

She later added if she’s elected she would make sure Arizonans “never have to vote ever again.”

The show was guest-hosted by rapper Jack Harlow who was also the musical guest.