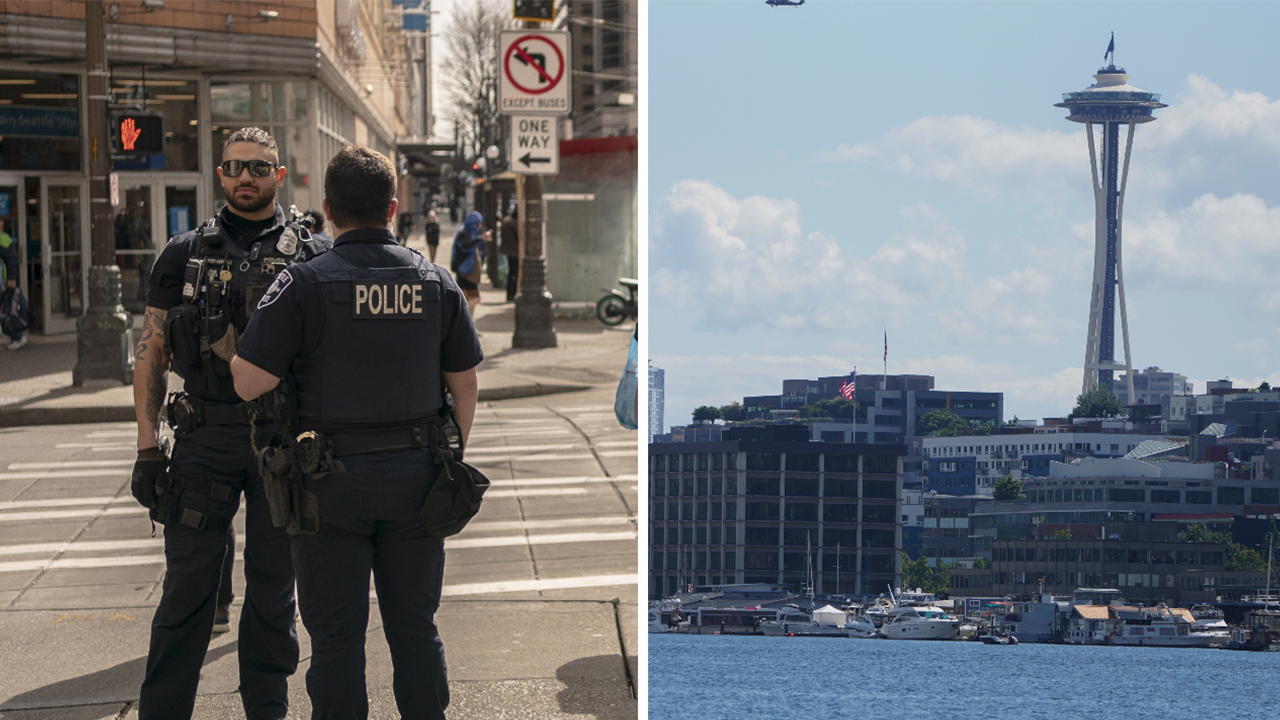 Washington state law enforcement authorities are denying social media claims that there is a serial killer on the loose, who is allegedly targeting women in their 30s, in the Seattle area.

“At this time, the Sheriff’s Office has identified no evidence affirming this for any cases under our jurisdiction.”

Reports of the alleged serial killer surfaced over the weekend, allegedly stemming from an email from a manager of a Seattle bar to staff, according to KIRO 7. The email reportedly detailed that a killer was abducting women in their 30s who were out getting drinks with friends, and then dismembering them, the outlet reported of the email.

Right, a view of the Seattle skyline is seen from Lake Union before the NHL -Seattle Kraken expansion draft July 21, 2021, at Gas Works Park in Seattle. Left, a member of the Metropolitan Improvement District Downtown Ambassadors cleans near Seattle Police Department officers on patrol on Third Avenue in downtown Seattle on Thursday, March 24, 2022.
(Photo by Jeff Halstead/Icon Sportswire via Getty Images / David Ryder/Bloomberg via Getty Images)

The claim was soon publicized by a Seattle-area news aggregator called @dubseatv.

“King County Detectives have been notifying locals about a serial killer in Seattle right now,” an Instagram post from the aggregator reads. “Multiple women’s bodies have been discovered recently in the Burien and SODO area, apparently posed in the same way.”

“So far 4 women have been found in the SODO and Burien area. Detectives are avoiding going to the media to prevent enticing the suspect or suspects. Until more details arise, just be aware of your surroundings and avoid walking alone late, if you can,” a caption on the post reads.

The Seattle Police Department responded to a Twitter user who took a screenshot of the Instagram post and asked the police if claims of a serial killer were legitimate.

“We’ve received a number of inquiries about this. Seattle PD does *not* have any serial cases,” the police department said on Saturday.

The Burien Police Department and City of Burien, located about 10 miles outside of Seattle, also shared the King County Sheriff’s Office message denying the rumors on their respective Facebook pages.

The Seattle skyline is pictured from a Washington State Ferry following a statement from ferry officials asking riders to consider staying in their vehicles when driving onboard and other steps to minimize coronavirus exposure in Seattle March 4, 2020.
(REUTERS/Jason Redmond)

Seattle PD told Fox News Digital on Tuesday morning that there are no updates from their weekend statement, reiterating the department “does not have any serial homicide cases.” When approached for comment Tuesday, the King County Sheriff’s Office sent a statement similar to the one posted to their Twitter account denying evidence of a serial killer.

One woman was found dead near Burien on Oct. 7, according to the sheriff’s office who asked the public to come forward with any tips on the case. Additional details surrounding the death were not made public.

Emma Colton is a writer for Fox News Digital. Story tips can be sent to emma.colton@fox.com.