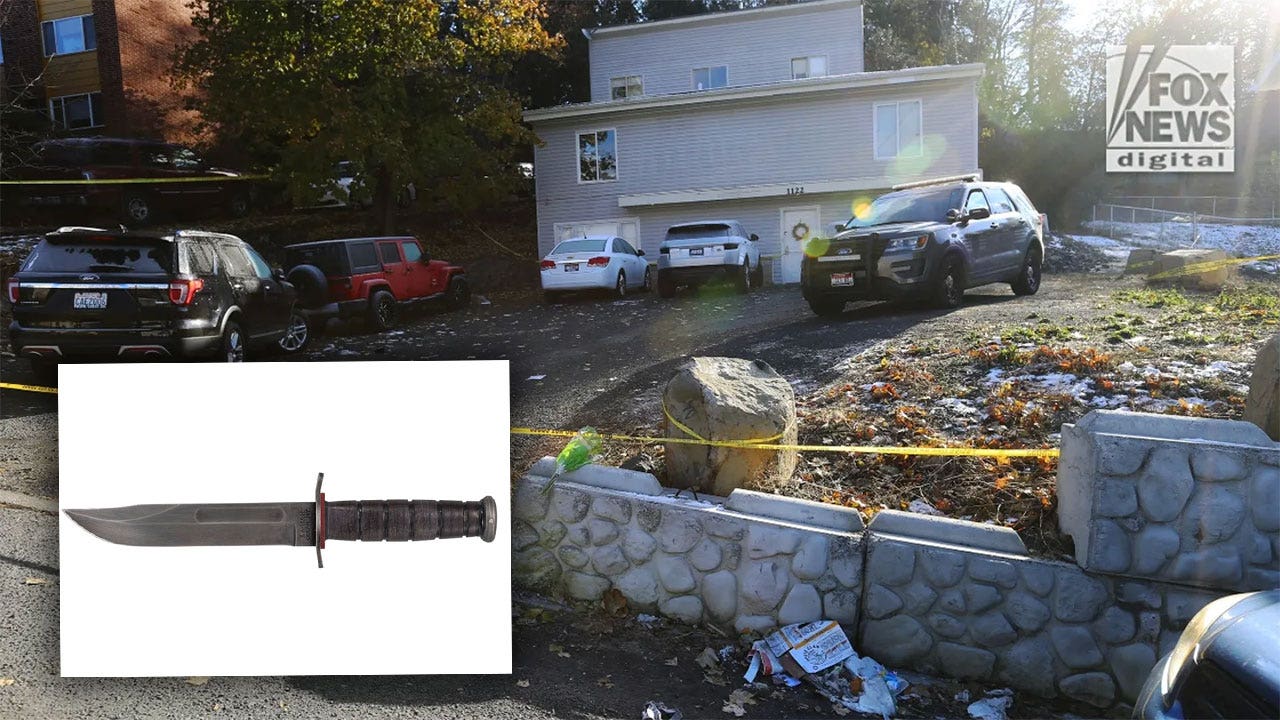 No arrests made in Idaho quadruple murder case

Fox News’ Dan Springer provides updates on the investigation into the murder of four University of Idaho students. Police say two other roommates were in the house at the time of the attack but were unharmed.

Authorities are looking for a “Rambo”-style knife in connection to the grisly slayings of four University of Idaho students, according to a local report.

Scott Jutte, general manager of Moscow Building Supply, told the Idaho Statesman Wednesday that police had visited the store more than once asking if any Ka-Bar brand knives had been sold.

“They were specifically asking whether or not we carry Ka-Bar-style knives, which we do not,” Jutte said in an interview with the local paper.

“If we did, we could’ve reviewed surveillance footage. But it wasn’t something I could help them with,” the manager continued.

Police suspect a Ka-Bar knife may have been used in slayings of four University Idaho students, inset. Caution tape surrounds the house near campus where the students were slaughtered.
(Credit: Ka-Bar / Derek Shook for Fox News Digital)

A police officer had most recently stopped by the home improvement store on Monday, he said.

Ethan Chapin, 20, Madison Mogen, 21, Xana Kernodle, 20, and Kaylee Goncalves, 21, were stabbed to death early Sunday morning with an “edged weapon,” according to police.

UNIVERSITY OF IDAHO MURDERS: TWO ROOMMATES WERE AT HOME WHEN FOUR STUDENTS WERE KILLED

They were found after police responded to a 911 call reporting an unconscious person at the King Road home where the victims lived with two female roommates. Authorities have not named a person of interest and do not have a suspect in custody.

Coroner Cathy Mabbutt told Fox that the same knife was likely used to kill all four students. The autopsy findings are expected this week.

Moscow Police Capt. Anthony Dahlinger declined to comment on the interview with Jutte or their search for the murder weapon.

UNIVERSITY OF IDAHO MURDERS: THREAT STILL POSSIBLE WITHOUT ANY SUSPECTS IN CUSTODY, POLICE

Ka-Bar knives are about 6 inches long and “similar to the knife Rambo has,” Jutte said. They have a blade on one side and a serrated edge on the other.  The combat knife was issued by the U.S. Marine Corps in the 1940s, according to the company’s website.

The four victims in the University of Idaho slayings Nov. 13, 2022.
(Instagram: @kayleegoncalves)

The knife was later adopted by the Marines, the Army, Navy, Coast Guard and Underwater Demolition Teams.

The knives are widely used by survivalists and outdoorsman, according to the company.

At a press conference Wednesday, Moscow Police Chief James Fry said investigators are pursuing every lead and believe it was an isolated, targeted attack based on the evidence at the scene.

He urged locals to “stay vigilant” as the “individual is still out there.”

Haley Chi-Sing contributed to this report.

Rebecca Rosenberg is a veteran journalist and book author with a focus on crime and criminal justice. Email tips to rebecca.rosenberg@fox.com and @ReRosenberg.