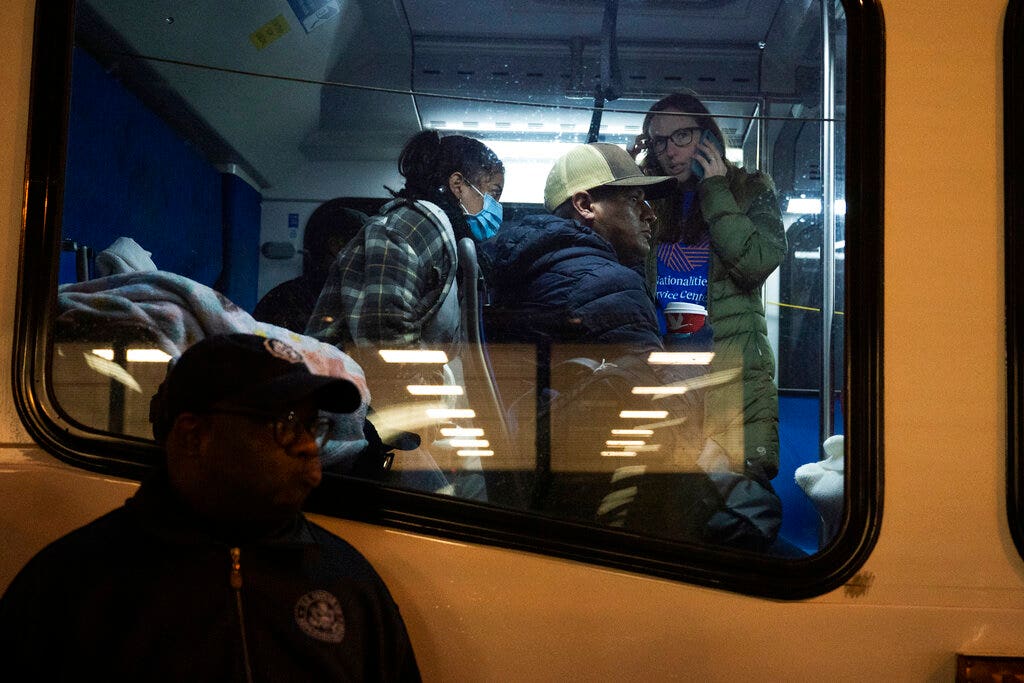 The group arrived just before 10 a.m. at the 30th Street bus station and was greeted by supplies, blankets, and coats on a blustery cold day, Fox Philadelphia reported.

“We successfully assisted asylum seekers from Texas last week, and we continued to do so today,” Philadelphia Mayor Jim Kenney tweeted. “These folks are looking for a brighter and more hopeful life in America. We’re proud to welcome them and provide them with the services and support they deserve.”

The arrival was the second in less than a week amid a push by Texas Gov. Greg Abbott to spread the care of migrants to so-called “sanctuary cities.” As of Monday, Texas has bused nearly 8,400 migrants to Washington D.C., more than 3,800 to New York City, over 1,200 to Chicago and 100 to Philadelphia, Abbott said.

“Texas is doing whatever it takes to provide relief to our overwhelmed border communities,” he said Monday.

Migrants sent by Texas Gov. Greg Abbott arrive near 30th Street Station Wednesday morning in Philadelphia. Abbott has sent the buses to Democratic-led cities as a way to maximize exposure over what he says is inaction by the Biden administration over high numbers of migrants crossing on the southern border.
(AP)

The latest transport comes as Abbott is escalating Operation Lone Star, his border security initiative. Last week, he instructed the Texas Military Department and Texas Department of Public Safety to use “all available strategies and tools” to respond to the “border crisis created by President Biden,” a spokesperson told Fox News Digital.

“Since March 2021, the Operation Lone Star partners have undertaken unprecedented border security efforts that include arresting human and drug traffickers and others in violation of Texas law, as well as seizing enough deadly fentanyl to kill every man, woman, and child in America,” Abbott spokesperson, Kim Carmichael, said. “These actions have been necessary because of President Biden’s continued dereliction of duty enforcing our nation’s immigration laws.”

“Until the federal government fulfills its obligation to safeguard Americans, Texas law enforcement and the Texas Military Department will keep identifying ways to secure our communities against record-breaking illegal border crossings and transnational criminal activity,” she added.

“Sadly, racism and human cruelty have historically been intertwined in how immigrants are received by and within this country, something the previous presidential administration openly and actively encouraged,” Kenney said, upon the arrival of the first bus of migrants to his city.

In an effort to secure the border, the TMD told Fox News Digital last week it will deploy 10 M113 armored personnel carriers to the Texas–Mexico border, as well as increasing aircraft flights and security efforts.

“These actions are part of a larger strategy to use every available tool to fight back against the record-breaking level of illegal immigration,” the agency said. “The Texas National Guard is taking unprecedented measures to safeguard our border and to repel and turn-back immigrants trying to cross the border illegally.”