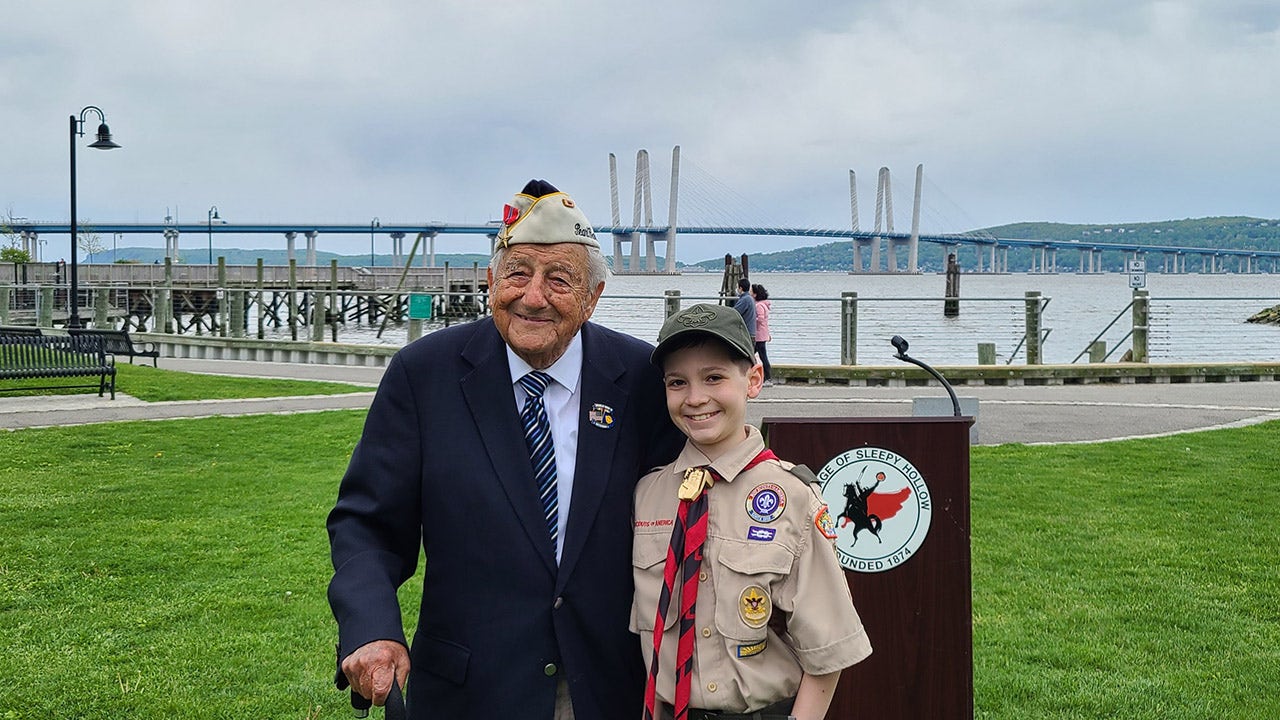 For one young man in Tarrytown, New York, honoring a local legend on Veterans Day was one of the most important things in his busy teen life.

“He is a leader and a doer, too,” his mom, Laurie Smith, told Fox News Digital in a phone interview.

VETERANS DAY AND ITS HISTORY: 6 KEY FACTS TO KNOW

That veteran, Armando “Chick” Galella, who died on Sept. 29, 2021, at age 100, is a “legend” in the adjacent communities of Tarrytown and Sleepy Hollow, said Laurie Smith.

“All the children of the town knew him. He had this beautiful home in the middle of town and he was the grand marshal of every parade — you know, he’s ‘that guy,’” Laurie Smith added.

Galella was born in 1921. The Sleepy Hollow native enlisted in the U.S. Army in 1940, according to a veteran profile of him on the National WWII Museum website.

After training, he was assigned to the 443rd Signal Corps at Hickam Air Force Base — and lived through the Dec. 7, 1941, attack on Pearl Harbor, the museum’s site also noted.

Galella served for five years in the Pacific theater in some of WWII’s “bloodiest battles,” the museum site said, including Guadalcanal, Leyte Gulf, Iwo Jima and Okinawa.

He received the Bronze Star Medal for Meritorious Service and bravery in the Battle of Okinawa.

When he left the service in 1945, Galella had “earned the highest rank an enlisted man can achieve” — battalion sergeant major — the museum’s site also said.

Teen noticed how Galella honored others

“It was dedicated on Mother’s Day,” Smith said. “And all the Scouts were there.” (See the photo, below.)

“Chick” Galella, World War II veteran, is shown in 2021 standing beside the Gold Star Mothers memorial — which he arranged in honor of his fallen best friend’s mother and all Gold Star Mothers.
(Mike Galella)

Young Dylan never forgot that significant gesture and what it meant.

As part of his show of respect for Tarrytown’s heralded veteran after his passing, Dylan Smith, in late September, presented Galella’s great-grandchildren — Ellis, a fifth-grader, and Luke, a fourth-grader — with little LEGO figurines that look like Galella, said Laurie Smith.

“This is a passion of Dylan’s — starting back when he made tiny LEGO representations of his team of middle school teachers,” she added.

Dylan’s dad, Mike Smith, is also a veteran. He retired from the U.S. Navy after serving for 21 years, noted Smith. Dylan made a little LEGO person to honor his dad, as well. (See photo, below.)

Dylan Smith of New York created this LEGO piece to honor his own dad — who served in the U.S. Navy for 21 years.
(Laurie Smith)

We have a “sea of tiny little historical figures” around the house, Smith said, laughing, as she shared that her son enjoys creating LEGO replicas of real people from history.

After watching his hero honor Gold Star Mothers with a memorial, young Dylan Smith decided that he would — when the time came — honor Galella with a tangible symbol of appreciation for his service and his significance to the towns.

The memorial, consisting of two stone benches, is placed near the middle school.

“There’s a big hill in front of the school where several years ago, Chick started a tradition of having the middle school children — and sometimes little kids, from the kindergarten next door — come and plant American flags all over the hill,” said Smith.

She added, “And it’s beautiful, and really, really big.”

Chick would “bring a folding chair and sit and oversee the whole thing,” she added.

Armando “Chick” Galella, at age 97, is pictured saluting during an event on the USS Intrepid to mark the 77th anniversary of the attack on Pearl Harbor on Dec. 7, 2018, in New York City.
(Spencer Platt/Getty Images)

After the unveiling on Nov. 11, others in the community will be able to come and sit where Chick once sat — and remember and reflect on lives dedicated to service and country.

Dylan Smith first got a concrete slab — and planned to order benches, with Tarrytown donating one and neighboring town Sleepy Hollow donating one as well.

Halfway through the process, said Smith, “the Sleepy Hollow Department of Public Works said, ‘Oh, we have these old benches that used to line the street.'”

“Since they once lined the street, there’s a good chance that Chick actually sat on them,” she added.

VIRGINIA NAVY VETERAN SAYS ALL VETERANS DESERVE THANKS, NOT JUST THOSE WHO SAW BATTLE

Young Dylan also planted two cherry trees. “Those were Chick’s favorite trees,” Smith noted — and there is plaque in the veteran’s honor as well.

“My father would be so touched by today’s ceremonies,” said Michael Galella.

So Dylan Smith is honoring a veteran and town legend while also completing an important step in his journey toward Eagle Scout.

“The Eagle Scout service project is the big, visible project” to earn the rank, his mom said.

As her son quickly climbs the ladder to Eagle Scout, Laurie Smith said, “During COVID, when things were shut down, Dylan kept working on things. He didn’t stop, and that’s why he is at this point able to complete his big project for Eagle Scout.”

Chick Galella’s son, Michael Galella, is moved by the impression his dad left on people.

He said he didn’t realize how his dad’s talks throughout the community and his various projects — including “flags at the high school, the Gold Star Mother statue and talking to kids about Pearl Harbor” — would have “such meaning for such a young group of kids,” he told Fox News Digital by email.

It “obviously meant a lot to Dylan Smith, who spearheaded this dedication to my father at the high school,” he said.

He added, “It is so beautiful and it’s hard to comprehend that this dedication will hopefully withstand this place in time.”

He also said, “My father would be so touched by today’s ceremonies.”