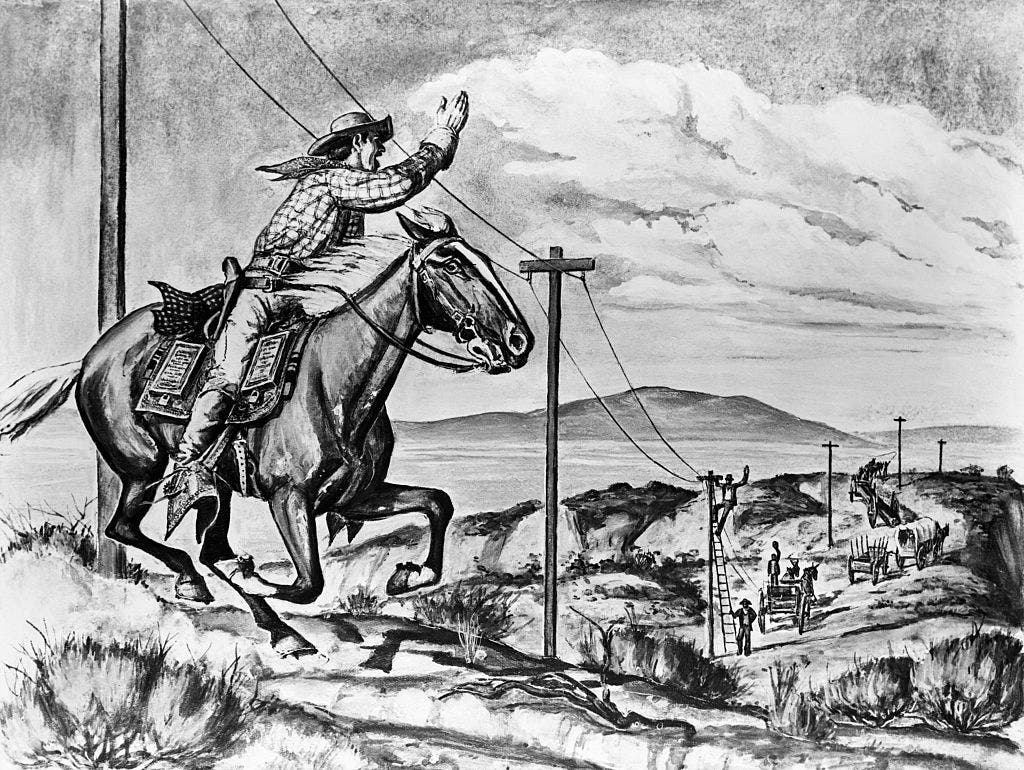 Western Union completed the transcontinental telegraph, bridging communications between the Atlantic and Pacific oceans for the very first time — just as the Civil War tore apart north and south — on this day in history, Oct. 24, 1861.

The lines from each coast were joined in Salt Lake City.

“The people of California desire to congratulate you upon completion of the great work,” the state’s chief justice, Stephen J. Field, wrote in the absence of the governor to President Abraham Lincoln in Washington, D.C.

ON THIS DAY IN HISTORY, OCT. 21, 1797, LEGENDARY WARSHIP USS CONSTITUTION LAUNCHED IN BOSTON

“They believe it will be the means of strengthening the attachment which bind both east and west to the Union. They desire in this the first message across the continent to express their loyalty to that Union.”

“The people of California desire to congratulate you upon completion of the great work,” California chief justice, Stephen J. Field, wrote in the absence of the governor to President Abraham Lincoln in Washington, D.C., in the first transcontinental telegraph message on Oct. 24, 1861.
(Library of Congress, Manuscript Division, Abraham Lincoln Papers)

The completion of the telegraph, making coast-to-coast communication faster than ever, instantly rendered obsolete the previous method of transcontinental communication and ended a short but storied chapter in American history.

The transcontinental telegraph “will be the means of strengthening the attachment which bind both east and west.”

“This technological advance, pioneered by inventor Samuel F.B. Morse, heralded the end of the Pony Express,” wrote the Library of Congress.

“Only two days later, on October 26, the horseback mail service that had previously provided the fastest means of communication between the eastern and western United States officially closed.”

The Pony Express had been founded only 18 months earlier in April 1860.

It took about 10 days in summer and 16 days in winter to deliver messages from St. Joseph, Missouri, to San Francisco.

“The Express logged its fastest time delivering President Lincoln’s first inaugural address — seven days and 17 hours,” proclaimed the Library of Congress of the president’s March 4, 1861, ascension to the White House.

ON THIS DAY IN HISTORY, SEPT. 23, 1806, LEWIS AND CLARK RETURN TO ST. LOUIS AS HEROES AFTER JOURNEY

“The push to create a transcontinental telegraph line had begun only a little more than year before when Congress authorized a subsidy of $40,000 a year to any company building a telegraph line that would join the eastern and western networks,” wrote History.com.

“The Western Union Telegraph Company, as its name suggests, took up the challenge, and the company immediately began work on the critical link that would span the territory between the western edge of Missouri and Salt Lake City.”

Illustration depicting Abraham Lincoln reading the draft of the Emancipation Proclamation to his cabinet in 1862 (undated). The president received the first transcontinental telegraph on Oct. 24, 1861.
(Getty Images)

The transcontinental telegraph was one of several major milestones in the quest by the American people to meet their Manifest Destiny and unite a nation from sea to shining sea.

Explorers Meriwether Lewis and William Clark found a land-and-water route to the Pacific Ocean after an 18-month journey from St. Louis on Nov. 15, 1805.

The transcontinental railroad was joined with the driving of a ceremonial last gold spike in the tracks on May 10, 1869, in Promontory Point, Utah.

The Panama Canal was completed across the Central American nation’s narrow isthmus on August 15, 1914. It connected the oceans by sea for the first time without the long, dangerous trip around the Cape of Good Horn at the tip of South America.

Copy of an engraving celebrating the first telegraphic message from California, showing an angelic figure carrying a telegram that reads, “May The Union Be Perpetual” while walking along telegraph wires, Nov. 1861. The first transcontinental telegraph line was inaugurated on Oct. 24, 1861.
(Photo by Interim Archives/Getty Images)

The project faced numerous challenges, among them the vast distances and lack of needed resources and industry in the middle of the continent.

“Wire and glass insulators had to be shipped by sea to San Francisco and carried eastward by horse-drawn wagons over the Sierra Nevada,” reported History.com.

“Supplying the thousands of telegraph poles needed was an equally daunting challenge in the largely treeless Plains country, and these too had to be shipped from the western mountains.”