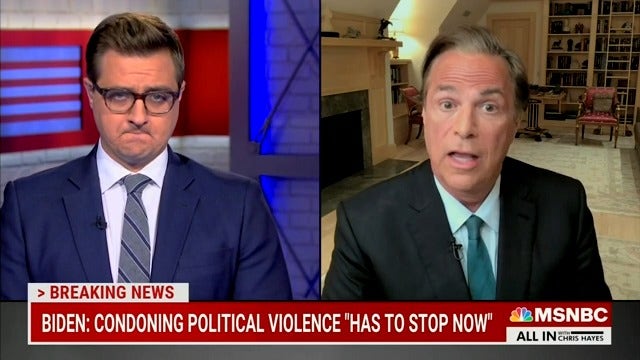 Presidential historian Michael Beschloss painted America as being only a few days away from being in an authoritarian nightmare Wednesday on MSNBC’s “All In with Chris Hayes.”

President Biden gave a political speech that was condemned by Republicans and praised by liberals such as Beschloss who said it was “absolutely candid and absolutely right.”

The historian warned that “six nights from now, we could all be discussing violence all over this country. There’s signs that may happen, may God forbid, that losers will be declared winners by fraudulent election officers, or secretary of state candidates, or governors, or state legislatures.”

“We could be six days away from losing our rule of law, and losing a situation where we have elections that we all can rely on. You know, those are the foundation stones of a democracy,” he claimed.

‘DISASTER’: DEMOCRATS CALL IN BIDEN TO CAMPAIGN FOR STRUGGLING CANDIDATES

Beschloss then appeared to downplay economic issues, saying that American democracy is facing an existential threat.

“So, if Biden had gone on the air tonight and said, ‘biggest thing we have to worry about is marginal tax rate,’ or something like that. Well, it is important, but what significant presidents do, I think you’ll agree, we both write history, you and I. 1860, Lincoln didn’t say biggest issue was colleges, although he felt strongly. He said the country can’t survive half slave or half free,” he noted.

He continued, “1940, Franklin Roosevelt didn’t say, you know, ‘the biggest thing I’m worried about is foreign policy.’ Foreign policy was important to him, but what he did say was, ‘never before, since Jamestown and Plymouth Rock, has America been in such danger.’”

Joe Biden’s rhetoric has been praised by many on the left, but condemned by many commentators on the right.

He then suggested that President Biden’s speech had a similar dire warning and if it was not heeded by the electorate, America would become a dystopian nightmare.

“Joe Biden is saying the same thing tonight, and a historian 50 years from now – if historians are allowed to write in this country and if they are still free publishing houses and a free press – which I’m not certain of – but if that is true, a historian will say what was at stake tonight and this week was the fact whether we will be a democracy in the future, whether our children will be arrested and conceivably killed,” Beschloss claimed.

He warned, “We’re on the edge of a brutal authoritarian system, and it could be a week away.”

The latest Fox News Power Rankings forecasts GOP control of the House after the Nov. 8 midterm elections, with control of the Senate still a toss-up.