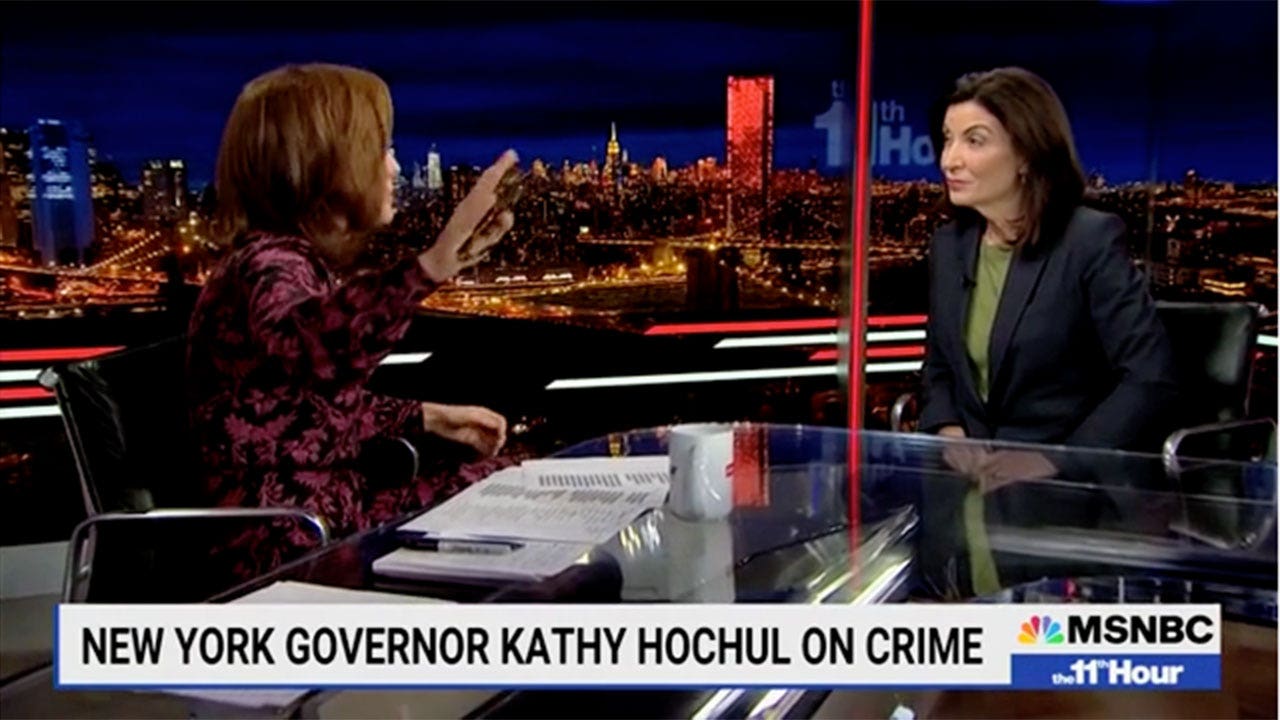 MSNBC’s Stephanie Ruhle pressed Gov. Kathy Hochul on crime and her plans to address it in New York City during an appearance on MSNBC on Friday, insisting New Yorkers don’t feel safe.

After Hochul touted getting guns off the streets in New York and her partnership with New York City Mayor Eric Adams, Ruhle interrupted and emphasized that people do not feel good about crime in New York.

“Okay, I’m gonna interrupt you then. Here’s the problem. We don’t feel safe. You might be working closely with Mayor Adams, you may have spent a whole lot of money. But I walked into my pharmacy, and everything is on lockdown because of shoplifters. I am not going into the subway. People do not feel safe in this town. So you may have done these things, but right now, we’re not feeling good. Where worried we could be San Francisco,” Ruhle said.

Hochul argued that New York City would never become San Francisco and said homicides and shootings have gone down “dramatically” from 2021. Hochul also said crime was an issue across the U.S.

LEE ZELDIN, GOV. KATHY HOCHUL DUKE IT OUT OVER CRIME IN FIERY DEBATE AMID SURGE IN NEW YORK VIOLENCE

Hochul said she understood these concerns and that she took the subway that morning.

“I understand the sense of anxiety. And that’s why a part of it is getting people who are severely ill out of the subways. Because you don’t know if they’re gonna have an episode. Something happens, they push somebody. That’s the fear of the unknown. We have to get them out of there, we’re doing it right now. Cameras, when you’re on a subway, the perpetrators now know they’re being watched, there’s a record of it. That’s going to start having a return effect,” Hochul said.

Hochul previously suggested voter concerns about crime and safety in certain states were part of a GOP “conspiracy.”

“These are master manipulators,” Hochul said, referring to Republicans. “They have this conspiracy going all across America trying to convince people that in Democratic states that they’re not as safe. Well guess what? They’re also not only election deniers, they’re data deniers,” she said.

She said Democratic cities and states were “safer.”

Her Republican opponent, Lee Zeldin, has made crime the focus of his gubernatorial campaign.

Zeldin tweeted a picture of the front page of the New York Post on Friday, which showed a homeless man with 25 prior arrests was accused of raping a jogger in New York City’s West Village, and said told his followers to “vote like your life depends on it.”