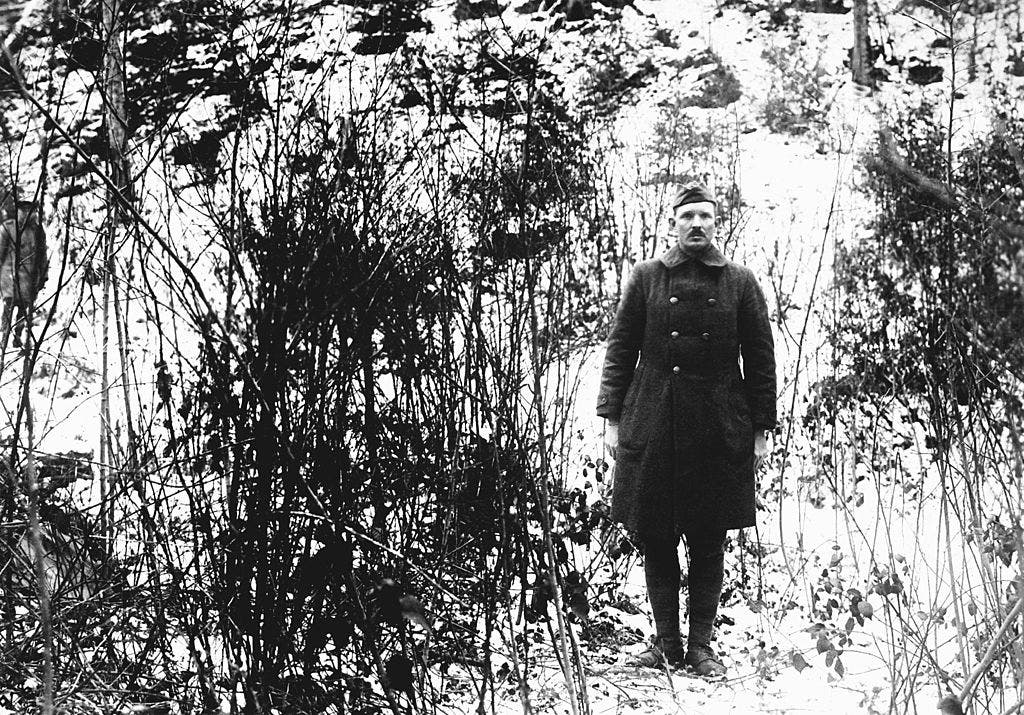 Yet the battlefield heroics of the born-again backwoodsman and Tennessee sharpshooter astounded even the most hardened soldiers of World War I.

“What you did was the greatest thing accomplished by any private soldier of all the armies of Europe,” he was reportedly told by French military hero Marshal Ferdinand Foch, the commander of Allied forces in the Great War.

York’s actions, for which he earned the Medal of Honor, still astound Americans today.

Leading seven men behind enemy lines — the remnants of a U.S. Army platoon slaughtered in the Meuse-Argonne Offensive on Oct. 8, 1918 — York killed an estimated 20 Germans, took 132 prisoners and silenced as many 25 machine guns.

He brazenly marched his captors past enemy trenches back to American lines.

Full-length portrait of Sergeant Alvin C. York (1887-1964), of the 328th Infantry Regiment, who with the aid of 17 men captured 132 German prisoners and became one of the most decorated American soldiers of World War I, near Cornay, France, February 1919. The location of the photo shows the hill upon which the raid took place.
(Photo by Interim Archives/Getty Images)

Sergeant York earned the acclaim of the nation.

Yet he suffered a personal battle much of his life, fearing condemnation in the eyes of God for taking the lives of other human beings.

“His fortunes changed when he gave his life to Christ” around 1915.

“I wanted to be a good Christian and a good American too.” — Sergeant Alvin York

York first refused to fight when the United States entered World War I in 1917. He filed as a conscientious objector, but ultimately submitted to Uncle Sam.

The movie version of his life, “Sergeant York,” starring Gary Cooper, hit the silver screen in 1941.

It earned 11 Academy Award nominations and two Oscar wins, including Best Actor for Cooper, and was the top-grossing movie of the year.

“Sergeant York” was being shown in theaters on Dec. 7 when Japan attacked Pearl Harbor, launching America into World War II.

Marshall Ferdinand Foch of France at his desk. The commander of all Allied forces in World War I said U.S. Army Sgt. Alvin York’s heroic capture of 132 Germans “was the greatest thing accomplished by any private soldier of all the armies of Europe.”
(Getty Images)

“There were numerous reports of young men leaving movie theaters and going to enlist, so fervent was their patriotism,” reported the Knoxville Focus.

“He was just daddy to me,” daughter Betsy Ross York, now 89 and a resident of Bowling Green, Kentucky, told Fox News Digital.

“He never did talk about the war, and we didn’t ever ask him.”

“The Yorks struggled in poverty, which only worsened when York’s father died in 1911,” writes the National Museum of the Army.

“York only had nine months of schooling but had gained a variety of skills exploring and hunting for game in the mountains of Tennessee. York became a skilled marksman and continued to work jobs around Pall Mall to support his family.”

He became a member as an elder at the Church of Christ in Christian Union following his awakening, adopting pacifism.

“He told producers that he felt like he was struck by lightning when he found Christ.”

The movie shows York’s conversion come as he was nearly struck by lightning. But that was Hollywood’s dramatization of the event.

“He told producers that he felt like he was struck by lightning when he found Christ,” grandson Gerald York said.

The future Sergeant York was of fighting age — 29 — when the U.S. entered World War I.

“My religion and my experience … told me not to go to war, and the memory of my ancestors … told me to get my gun and go fight,” York wrote of his inner conflict.

“I wanted to be a good Christian and a good American, too. I was not a Sunday Christian. I believed in the Bible, and I tried in my own way to live up to it.”

VETERANS DAY: 5 THINGS TO DO AND SAY TO HONOR AMERICA’S HEROES

Alvin C. York, who had rarely if ever left his little corner of heaven in rural Tennessee, shipped off across the ocean for hell.

York entered the war in France as a member of the 82nd Division — which become the 82nd Airborne Division of paratroopers. They rose to fame jumping into Normandy in World War II.

He awoke on the morning of Oct. 8, 1918, to find himself in the midst of a savage battle, which he recorded in a diary published in 1922.

Portrait of U.S. Army Sergeant Alvin York (1887-1964) seated in his military uniform, between 1915 and 1920.
(Photo by Library of Congress/Interim Archives/Getty Images)

His unit was struck by artillery and gas attacks and then marched on a German position heavily fortified with machine guns.

“Our boys just went down like the long grass before the mowing machine at home,” the hillbilly soldier wrote metaphorically of watching his comrades slaughtered.

“Our boys just went down like the long grass before the mowing machine at home.” — Sergeant York

“I just knew that we couldn’t go on again until those machine guns were mopped up. So we decided to try and get them by a surprise attack in the rear. We figured there must have been over 30,” he also wrote — meaning 30 machine guns.

York was in charge of the few remaining men after all their officers were killed.

Frighteningly outnumbered and behind enemy lines, York found a firing position and began picking off German soldiers one by one.

“Every time a head come up, I done knocked it down … I was giving them the best I had.”

He likened it to the way he shot turkeys back home.

“In the middle of the fight a German officer and five men done jumped out of a trench and charged me with fixed bayonets … I only had about half a clip left in my rifle; but I had my pistol ready. I done flipped it out fast and teched them off, too.”

The Germans were stunned after seeing six men dropped so quickly. They began surrendering en masse, fearing they faced a larger American unit.

A German major, who spoke fluent English, facilitated the surrender and the march back to American lines.

“There was so many [Germans] there was danger of our own artillery mistaking us for a German counter-attack and opening up on us,” York wrote.

JEEP SALUTING US MILITARY AND VETERANS WITH $1,000 CASH-BACK DEAL

“Lieutenant Woods came out and counted 132 prisoners. And when he counted them he said, ‘York, have you captured the whole German army?’ And I told him I had a tolerable few.”

York’s exploits became legend on the battlefront. But he never shared his story in his many letters back home.

Close-up of American soldiers of the 18th Infantry, 1st Division holed up on the side of Hill 240 in the Ardennes, during the Meuse-Argonne Offensive, France, Oct. 11, 1918.
(Photo by PhotoQuest/Getty Images)

His family only learned of his heroics when the exploits were written up in the April 26, 1919, edition of the Saturday Evening Post, then one of the most widely read publications in America.

“It stands out as the greatest individual feat of the war, not only because of the amazing things he did that day, but because of the man’s deep religious convictions and scruples.”

‘Sense of peace before he died’

Sergeant Alvin C. York died on Sept. 2, 1964, in Nashville after a long illness that left him incapacitated in his later years.

President Lyndon B. Johnson led a long list of dignitaries who attended his funeral.

York is buried in his hometown of Pall Mall.

His legacy lives on an incredible number of ways, both big and small.

MEET THE AMERICAN WHO WROTE ‘THE BATTLE HYMN OF THE REPUBLIC’

The 82nd Airborne gifted one of its most famous veterans in his later years a 1957 Pontiac. The York family still keeps and cherishes the automobile today.

Sergeant York used his royalties from the movie to support his church and fund a short-lived Bible school.

The 82nd Airborne Division gifted Sgt. Alvin York with a 1957 Pontiac in his later years. The family still keeps it as a possession. Shown here with the vehicle are two of his children, late son Andrew Jackson York and daughter Betsy Ross York.
(Courtesy York Family)

He also founded the Alvin C. York Institute in 1926. It was transferred to state management in 1937 and still teaches high school students today,

“It is the only comprehensive secondary school in the United States that is financed and operated by a state government,” according to the school website.

His descendants run the Sergeant York Patriotic Foundation. Pall Mall hosts a Veterans Day celebration on his property each November 11. His family will attend.

York Avenue on Manhattan’s Upper East Side appears to be just another New York City landmark attributed to its namesake community in England. However, it was named for Sergeant York in 1928.

A book, a movie, a sketch and post stamps featuring Alvin York, a U.S. sergeant in World War I, are on display on a table in Alexandria, Virginia, on Oct. 2, 2018. Sergeant York received the Medal of Honor for leading an attack on a German machine gun nest during the United States-led portion of the Meuse-Argonne Offensive in France, taking 35 machine guns, killing at least 25 enemy soldiers and capturing 132 men.
(EVA HAMBACH/AFP via Getty Images)

York’s second child, George Edward Buxton, was named for the sergeant’s commanding officer in the army.

George answered the call of Christ and became a minister. Sergeant York asked his son for forgiveness for his sins in battle as death approached, according to Col. Gerald York.

“My dad told him, ‘You did what you did out of service to your country and your fellow soldiers. You didn’t do it out of malice or hate. You did it to save lives, to stop the carnage of your own men.'”

Added Colonel York, “I think it helped. I think it gave my grandfather a sense of peace before he died.”

To read more stories in this unique “Meet the American Who…” series from Fox News Digital, click here.