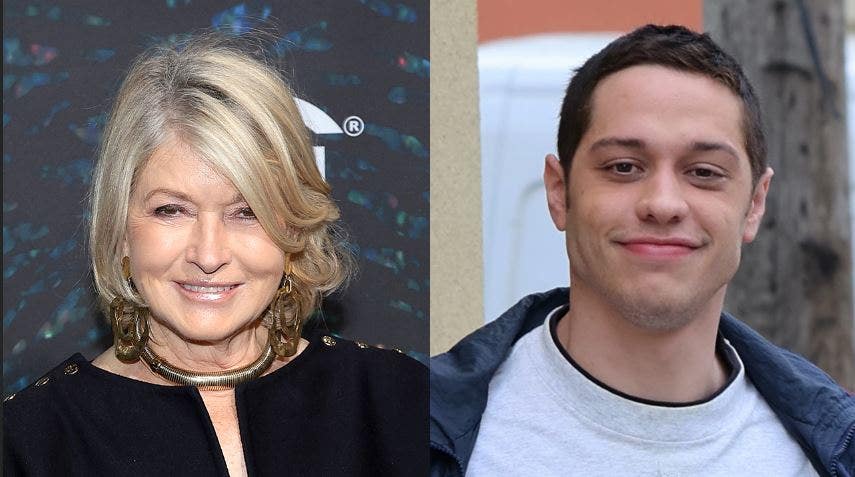 Martha Stewart on Tuesday said she would go on a date with newly single and “sort of cute” Pete Davidson.

Drew Barrymore addressed social media users wanting the home and garden maven to couple up with the comedian during a game on her talk show.

“Your date has as many tattoos as Pete Davidson,” Barrymore told Stewart, 81, during a segment where she was supposed to raise a green, red or yellow flag if she approved of a hypothetical date.

“I knew it! Martha, you minx, I knew it!” the host laughed as Stewart immediately raised a green flag. Stewart continued to raise the green flag when Barrymore changed the hypothetical to “Your date is Pete Davidson.”

Martha Stewart, who told Drew Barrymore Pete Davison is like her “lost son” also said he was “kind of cute” and a “good guy.”
(Dimitrios Kambouris/Jose Perez/Bauer-Griffin)

“There’s a thing on the internet where everybody wants you to go on a date with Pete Davidson,” Barrymore said of a viral photo that surfaced of Stewart holding Davidson’s hand from the pre-White House Correspondent’s Association Dinner in May. His then-girlfriend Kim Kardashian was also in the photo.

Stewart said she met the former “Saturday Night Live” cast member when he was a “little twerp” on the 2015 Comedy Central Roast of Justin Bieber with her.

“He was even twerpier than Bieber,” she added as Barrymore started hysterically laughing. “Who’s also very cute by the way.”

Stewart clarified that she thinks of Davidson more as her “lost son” when Barrymore noted that the comedian has dated older women in the past.

Earlier in the segment, Stewart told Barrymore she has been “single for like 30 years,” saying she had been “stupid” about relationships in the past and “should have married along the way” following her divorce from publisher Andrew Stewart in 1990.

“After I got divorced I did date a lot,” she said, explaining she didn’t prioritize meeting someone and still doesn’t but said she “misses” the “fun” of having someone special.

But when Barrymore, who said she has been single for seven years following her divorce from Will Kopelman, suggested setting Stewart up on a date she protested, saying, “I’m very busy. I use that as my excuse.”