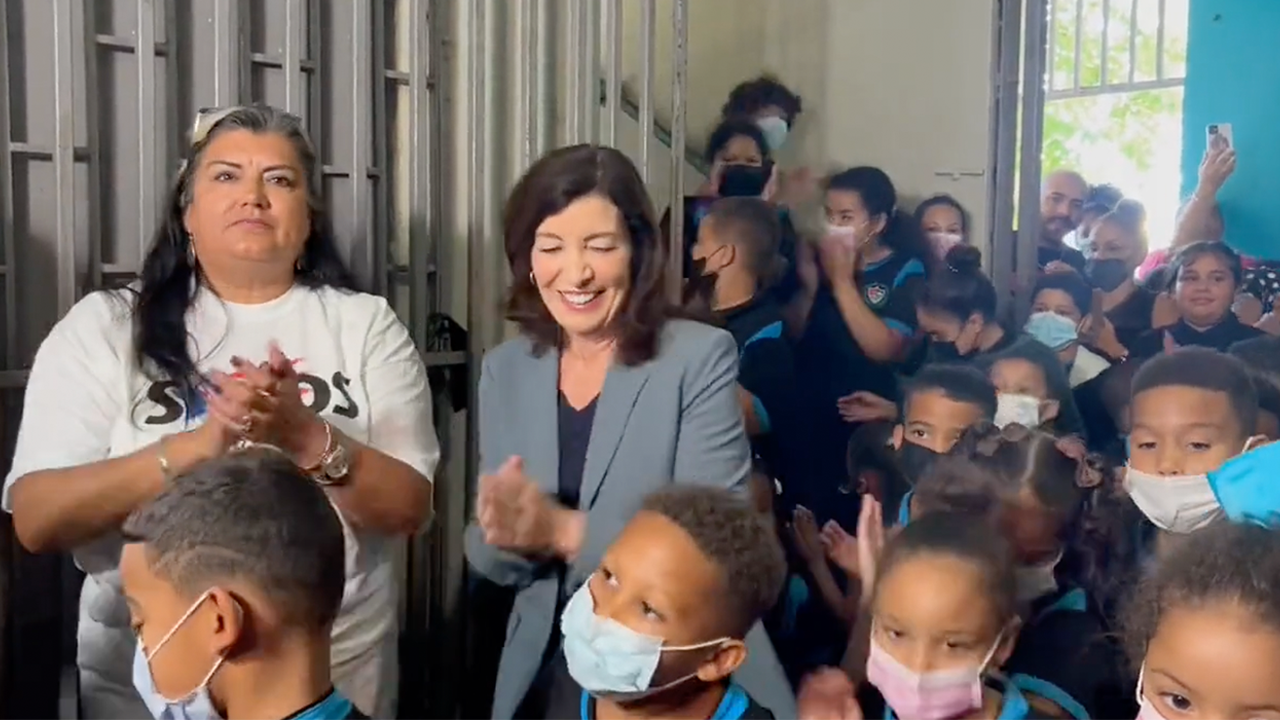 Conservative critics of newly re-elected Governor Kathy Hochul, D-N.Y., tore into her on Twitter after a recent video showed her happily dancing unmasked surrounded by dozens of masked kids in a Puerto Rican school.

Only days after her victory over Rep. Lee Zeldin, R-N.Y., in the New York governor’s race, Hochul traveled down to Puerto Rico to provide aide to the U.S. territory’s victims of Hurricane Fiona.

During her trip, video of the governor visiting a local school went viral on Twitter. It depicted Hochul smiling and dancing with dozens of Puerto Rican school children.

Gov. Hochul visits Puerto Rican school children while on a recent trip to the territory.
(Screenshot/Twitter)

Though as conservatives pointed out once the video hit Twitter, Hochul was not wearing a mask, while each of the surrounding children was.

Her critics piled on her for the apparent hypocrisy.

Conservative commentator Jason Howerton skewered Hochul, writing, “All the children are forced into masks while @GovKathyHochul and adults breathe freely. They’ve learned nothing. And why would they have? New York, you just elected this woman after witnessing the utter destruction of your state. You’ll get what you voted for.”

The Young Americans for Liberty Twitter account claimed, “Masks on the children. No mask for @GovKathyHochul. She’s special, you see. New York just elected Hochul for a full term as governor. A tyrant has been emboldened and New Yorkers are going to get what they voted for.”

Journalist Ian Miles Cheong tweeted, “Kathy Hochul visits a school in San Juan. She doesn’t wear a mask but all the kids have to. Know your betters, peasants.”

Social Worker Justin Spiro asked, “Why is Governor Hochul and nearly every adult maskless while nearly every child is masked? Is that the rule at this school in Puerto Rico?”

Conservative activist Charles Downs provided harsh comment on the governor’s antics, tweeting, “Kathy Hochul is just the worst! Over the next four years, New York City and the surrounding areas will turn into Seattle. Remember in Portland and Seattle: crime, ANTIFA, and all the crazy woke ideology make it into the suburbs. Democrats destroy states!”

Conservative and Grabien.com founder Tom Elliott tweeted, “Forcing kids to wear masks while you exploit them for your own political career. What shameful cruelty.”