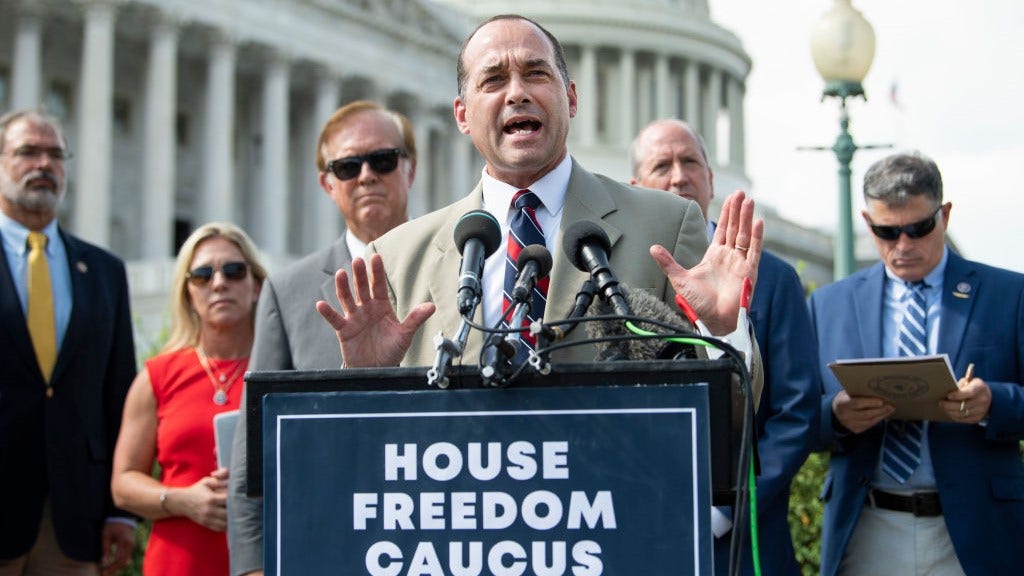 The House Freedom Caucus is discussing rival candidates for speaker as it seeks to pressure Minority Leader Kevin McCarthy into giving legislative concessions in exchange for supporting his bid for speaker, which he has started making even before Republicans have locked up a majority.

New and existing members of the Caucus have spent the past two days at a retreat in Washington, D.C. discussing how to approach the speaker election later this month. More hard-line members are pressing for the caucus to stand united in opposing McCarthy, R-Calif., on ideological grounds.

Others, meanwhile, want to strike a deal with McCarthy on the House rules. The demanded changes are technical but would drastically reduce the House speaker’s control over the legislative process.

The House Freedom Caucus is discussing rival candidates for speaker as it seeks to pressure Minority Leader Kevin McCarthy into giving legislative concessions in exchange for its support.
(Win McNamee/Getty Images)

As the negotiations have yet to deliver a breakthrough, the Freedom Caucus has begun debating alternative candidates for speaker. Good, who was first elected in 2020, has been floated as a potential contender, but few see him as a legitimate opponent for McCarthy.

Instead, the Freedom Caucus is weighing whether it could throw its unanimous support behind a challenger outside its rank. House GOP Whip Steve Scalise and GOP Vice Chair Mike Johnson, who already hold conference-wide posts, have been floated as possibilities.

Both Scalise and Johnson are officially backing McCarthy’s campaign for speaker and neither is officially courting the Freedom Caucus. Scalise, in fact, is already running for the number two spot of House majority leader.

Among the conservatives’ demands are restoring the power to remove a speaker by a vote that could be called at any time, ensuring a floor vote on any amendment if 10% percent of the GOP conference cosponsors it, and reinstating a “majority of the majority” rule under which bills would only advance when supported by most GOP members.

“Kevin McCarthy has done nothing in two years to earn my vote,” said Rep. Bob Good, who has been floated as a potential speaker candidate. (Photo By Tom Williams/CQ-Roll Call, Inc via Getty Images)

“There’s a point of leverage in these leadership votes,” said House Freedom Caucus Chairman Scott Perry, R-Pa. “We want to have a conversation, devoid of the politics about who is leading, on how the House should operate, how legislation should pass.”

McCarthy, who was prevented from ascending to the speakership in 2015 because of the Freedom Caucus, has not yet agreed to the changes wholesale. GOP leadership has similarly not agreed to move the internal conference election until after the formal rules are adopted later this month.

A source close to the Freedom Caucus leadership said the discussions about alternative speaker candidates were still preliminary, and most of the group was focused on securing support from McCarthy for its rules overhaul.

“There’s a fairly easy solution here,” said the source. “McCarthy can support popular reforms to decentralize the speaker’s power and empower individual members, or he can roll the dice that someone else won’t make that compromise and get the speaker’s gavel.”

House leadership aides told Fox News Digital they expect McCarthy will cut a deal and give the Freedom Caucus at least a portion of what they want. They note that McCarthy has a nearly non-existent cushion of support to hit the 218 vote threshold needed to become speaker.

At the moment, the potential Republican majority looks to be anywhere between 218 seats, the bare minimum needed to control the House, and 230 seats. The latter would constitute a sweep of all outstanding races, including some in which Democrats are favored, but still falls far short of the 60 seats McCarthy predicted could be possible under a GOP wave that never materialized.

The Freedom Caucus, which has more than two-dozen members, could be pivotal to getting McCarthy across the 218-vote threshold needed to become a speaker.

McCarthy’s office did not respond to requests for comment on this story.