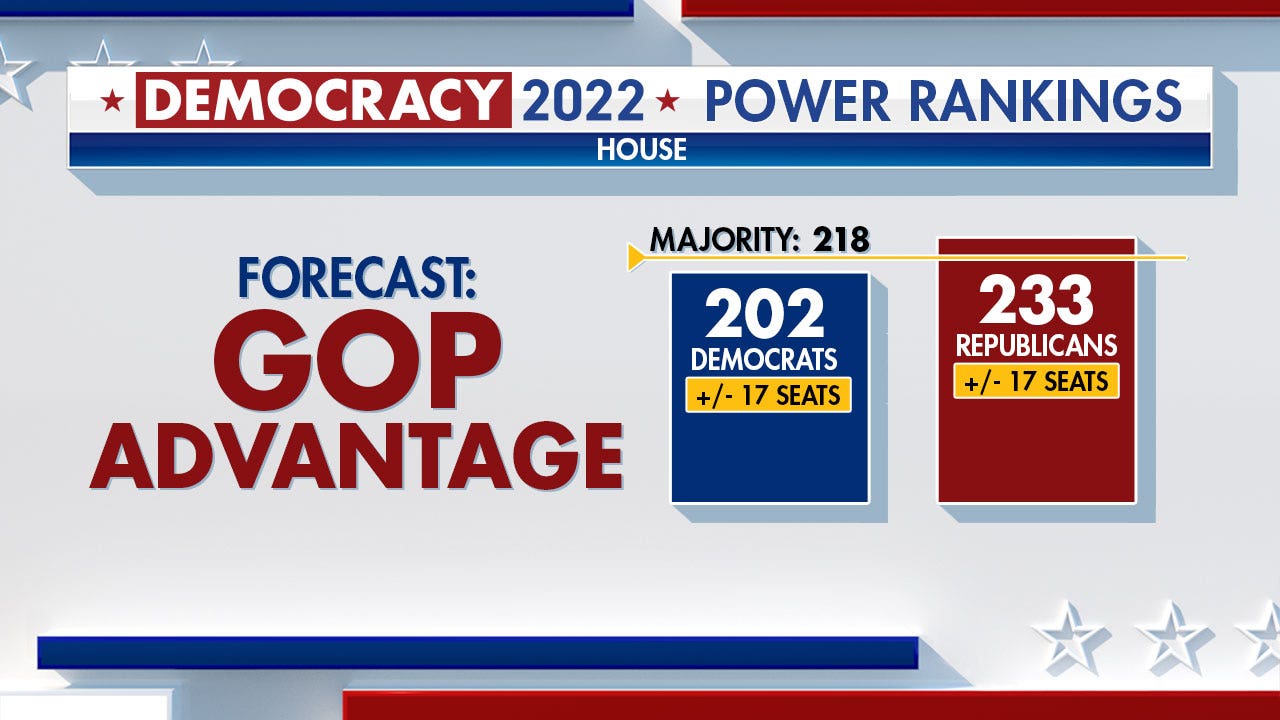 The forecast looks gloomier for Democrats as Election Day nears, with a spate of recent polls suggesting that even the sitting governor of New York is in some danger. In this edition of the Fox News Power Rankings, five northeast races shift towards Republicans, and signs of a potential upset are emerging in the Oklahoma governor’s race.

Republicans are now set to take a 16–seat majority in the House with a total of 233 seats, while the Democrats would take the remaining 202 seats. That is an increase of one for the GOP since last week. This forecast has a margin of error of approximately 17 seats, which means Democrats or Republicans could win about 17 more or fewer seats than the figures in the estimate above.

Best-case scenarios for both parties on Election Day.
(Fox News)

The “best case” chart now shows how the margin of error could play out for either party. An outstanding night for the Democrats would keep the party in power with 219 seats; a razor-thin two-seat majority, but enough to keep the GOP out of power. The ideal night for Republicans would give them a commanding 32-seat majority, or 249 seats.

This increase for the GOP comes as the party makes gains in national polling. Two weeks into October, our Fox News Poll showed Republicans taking the lead on the generic ballot among voters who said they felt “certain to vote” in the midterms. Now, multiple polls that break out their results among ‘certain’ or ‘likely’ voters are showing a small GOP advantage. It comes at a time when millions of Americans are already voting. Barring a late October surprise, it is difficult to see how the race for control of Congress could change direction.

The Senate election forecast showing the GOP with a slight advantage.
(Fox News)

There are no changes in the Senate forecast. Arizona, Georgia, Nevada and Pennsylvania remain the toss-up races, with a runoff in Georgia between the Democrat, Sen. Raphael Warnock, and GOP challenger Herschel Walker looking more likely as Election Day approaches.

Kathy Hochul is the incumbent governor of New York, but has never been elected to that office. The former lieutenant governor came into power in August 2021, replacing the scandal-plagued former Gov. Andrew Cuomo, and has struggled to find her footing. On the one hand, Hochul has forged better relationships with the state legislature and local governments (though Cuomo and former New York City Mayor Bill de Blasio set a very low bar). On the other hand, Hochul presided over a raft of strict COVID-19 regulations deep into the pandemic, and also had to replace her own lieutenant governor after her first choice was arrested on bribery charges.

Forecasts for governor’s elections across the country.
(Fox News)

Crime is the most important issue in this race, though, and it’s not even close. In a statewide Quinnipiac poll released last week, 28% of likely voters said crime was the most urgent issue facing New York, with inflation taking second place at 20%. Independents also placed it as their top issue by a 10-point margin. Even among Hochul’s base, crime ranked as the second-biggest issue, with 18% of Democrats calling it the most urgent concern. Overall, the poll showed support for Hochul at 50%, just four points above her opponent. Polling consistently shows that crime is an issue that favors Republicans this cycle, so Hochul is in some danger.

Republican challenger Rep. Lee Zeldin has made crime the cornerstone of his campaign, telling “Fox & Friends” he would repeal cashless bail and remove district attorneys who, he said, have refused to enforce the law, among other criminal justice reforms. For her part, Hochul appeared alongside New York City Mayor Eric Adams last weekend to announce an additional 1,200 overtime shifts per day for police officers to patrol the city’s transit system, along with other strategies they have said will reduce crime in America’s highest-populated city.

Hochul has seen some significant advantages. City and inner suburban voters have favored the Democrats strongly, and there are likely enough of them in the Empire State to overwhelm redder areas in the north. Zeldin’s vote to overturn the results of the 2020 election, and an endorsement from former President Trump, who had a 60% unfavorable rating in the same Quinnipiac poll, will also limit his general election appeal. Hochul still has the upper hand in this race, but it is certainly competitive. New York moves from Solid D to Likely D.

WHAT ARE THE FOX NEWS POWER RANKINGS?

33 seats remain toss-ups in the race for the House.
(Fox News)

A weak candidacy at the statewide level has implications in House races, and that is one of several factors driving the shifts towards Republicans in three New York districts.

We begin upstate in New York’s 22nd district, where the retirement of Rep. John Katko has forced an open race between two Navy veterans, Democrat Francis Conole and Republican Brandon Williams. This district contains Syracuse and Rome, plus a variety of outer suburban and rural areas, making it a hotly competitive area in the state. Both candidates are running strong campaigns, with Conole painting himself as a moderate on the economy and energy independence aligned with Sen. Joe Manchin, D-W.Va., and Williams telling voters about his experience running a software company to persuade them that he would understand their economic concerns. Recent polling from Siena has given Williams a five-point lead in the race (45% to 40%), and Hochul’s weakness at the top of the ticket has shown the most significant impact in upstate areas. Finally, while Williams supported overturning some abortion rights, that issue is less likely to play a central role in the campaign, and Williams said he did not support a national ban. This race has remained very competitive, but New York’s 22nd district moves from Toss-Up to Lean R.

Moving to the Hudson Valley, and the 17th district is home to one of the most powerful Democrats in Congress. Sean Patrick Maloney has represented parts of the area since 2013, and currently chairs the Democratic Congressional Campaign Committee, the organization directly responsible for keeping Democrats in power. Maloney is a well-known centrist and went into this race as the favorite, but opponent Mike Lawler has run a strong campaign focused on inflation and crime. He has also kept a distance from the “MAGA” movement in this suburban district, which voted for President Biden in 2020. Maloney is the only “incumbent,” but most of the territory is new to him after redistricting. Top GOP groups have dumped millions of dollars into the race and both parties believe it is highly competitive. Neither party has an overall edge, so this race moves from Lean D to Toss-Up.

Finally, two more races are shifting toward Republicans in the Northeast, though both remain in the Democrats’ column. First, New York’s 4th district, one of several in the Long Island area. Here, former Hempstead Town Supervisor Laura Gillen, the Democrat, will face Anthony D’Esposito, a Republican local councilman, former NYPD detective and fire chief. The latter is leaning heavily into crime on the trail, and as New York voters prioritize that over all other issues, this race has become more competitive. Gillen is talking about schools and worker rights, and has also leaned into abortion, capitalizing on confusing remarks her opponent made about supporting a national ban. This race moves from Likely D to Lean D.

JUDGE JEANINE PIRRO CALLS OUT DEMOCRATS FOR TRYING TO AVOID INFLATION: IT’S LIKE A ‘SHELL GAME’

Democracy 2022 Power Rankings showing a forecast of Republicans with the advantage in the House.
(Fox News)

In the Garden State, incumbent Democrat and former national security advisor Andy Kim is fighting to stay in the 3rd Congressional District. Under new lines, this central New Jersey seat would have voted for Biden by double digits in 2020. The threat comes from Bob Healey Jr., who serves as chairman for a local real estate and yacht manufacturing company. He has benefited from large amounts of outside spending in the race, with over $650,000 supporting him and another $2.1 million opposing Kim so far. Much of the money has come from Garden State Advance, a Super PAC which has received large contributions from Healey’s mother. New Jersey proved it was no liberal stronghold in the 2021 gubernatorial race, and both candidates are fighting hard for every vote. This race moves from Likely D to Lean D.

Joy Hofmeister has been the superintendent of public instruction in Oklahoma since 2015. She has also been a Republican for most of that time, but last year, announced she was switching to the Democrats to run against incumbent Gov. Kevin Stitt. What many observers wrote off as a dead-on-arrival campaign has since become a bright spot for the Democrats.

Hofmeister is an effective communicator and has largely set herself apart from national figures in her party, who have been deeply unpopular in this ruby-red state. However, her polling momentum is likely attributable to Stitt’s feud with Native American tribes. Early in his first term, Stitt tried to renegotiate gambling agreements with the tribes, who balked at the proposals and have since been seen as his worst nightmare. While they traditionally have eschewed endorsements, five major tribes threw their weight behind Hofmeister in a news conference this month.

Stitt has remained the clear favorite, thanks to a dominant Republican base and a $4 million fundraising advantage – but this race is competitive. Oklahoma moves from Solid R to Likely R.

2 weeks to go until Election Day

The countdown continues to Election Day, but voters are already having their say. Over 5 million Americans have cast a ballot by mail or in person so far. Turnout has exceeded all expectations in Georgia, but appears to be soft in Nevada, both critical swing states as we head into the final stretch. Our reporters are traveling with the campaigns and talking to voters in both those states and across the country as Democracy 2022 continues. Tune in to Fox News Channel and come back here next Tuesday for the final Power Rankings forecast.

Rémy Numa is the lead political affairs specialist for Fox News Channel. You can follow him on Twitter: @remynuma.