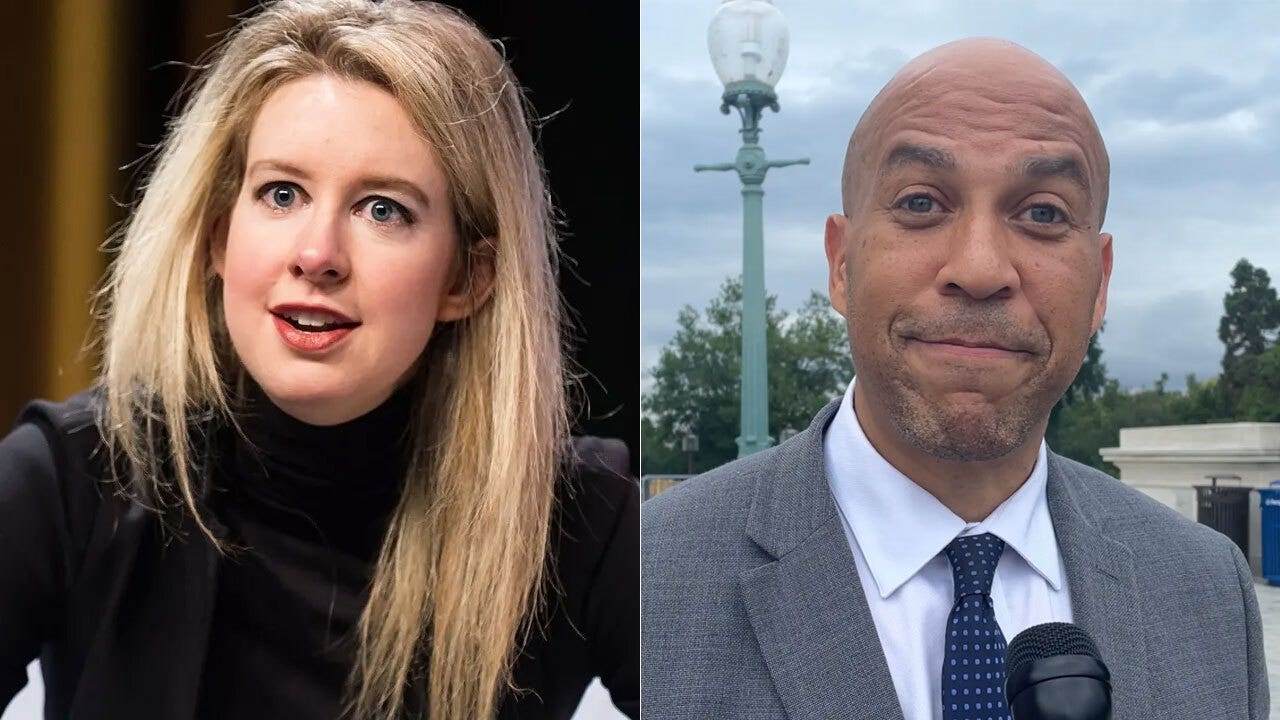 Days before the sentencing of convicted Silicon Valley fraudster Elizabeth Holmes, Sen. Cory Booker, D-N.J., wrote a letter to the federal judge presiding over her case, defending her character and seeking leniency for her prison sentence.

Booker argued to U.S. District Judge Edward Davila that Holmes was a “thoughtful” and philanthropic individual who wants to “make a difference in the world” and asked for a “fair and just sentence.”

Holmes faces up to 20 years in prison at her sentencing Friday after being convicted on three felony counts of wire fraud and one felony count of conspiracy to commit fraud. She was found to have misled investors and inspectors for years about the capabilities of her company Theranos’ blood-testing technologies, en route to a $9-billion valuation of her company and a host of flattering media profiles as a revolutionary figure in the industry.

Sen. Cory Booker is asking for leniency for his friend Elizabeth Holmes, who faces 20 years in prison after being convicted of fraud in the Theranos scandal.
(Fox News Digital/ Jon Michael Raasch)

Despite Holmes being convicted of such major fraud, Booker joined over 100 other individuals in writing letters attesting to her good character.

Booker said he and Holmes first met and bonded over a bag of almonds at a conference hosted by the late Sen. John McCain, R-Ariz., and were both vegans.

Booker said he was struck by her desire to make the world a better place, writing, “In the years since, I’ve always been struck by the way our conversations focused on her desires to make a positive impact on the world.”

He noted how she was “most interested” in talking about “world events and national global challenges.” He also claimed she wanted to explore ways to combat world hunger and climate change, in addition to providing health care to more individuals.

Holmes had ties to top Democrats in her heyday; then-Vice President Joe Biden visited Theranos in 2015 and called it “inspiring” and said Holmes shared the Obama administration’s vision of the future for health care. It was later revealed Biden had toured a fake lab that was staged for his visit.

Booker wrote, “Her focus was always thoughtful, demonstrating a depth of knowledge about such issues, a curiosity to know more, and a determination to make a difference herself.”

He also called her a friend and expressed “hope that she can make contributions to the lives of others, and that she can, despite mistakes, make the world a better place.”

Booker’s decision to stick his neck out for Holmes, a universal pariah after her misconduct was exposed, startled some media onlookers, such as the New York Times’ Michael Barbaro.

“An unexpected use of [Booker’s] political capital,” he wrote on Thursday.

Nov. 9, 2015: Then-Theranos Chief Executive Officer Elizabeth Holmes speaks on stage at the Glamour Women of the Year Awards where she receives an award, in the Manhattan borough of New York.
(Reuters)

Holmes’ unusually deep voice, use of black turtlenecks in the vein of Apple founder Steve Jobs and youth – she was 19 when she dropped out of college to found the company – helped propel her to stardom in the biotech industry. She was featured on magazine covers and smothered with awards and honors, but one reporter’s investigation helped blow the lid off the fraud at the heart of her mystique.

John Carreyrou’s series of Wall Street Journal stories in 2015 on the company’s faulty technology led to Theranos’ and Holmes’ downfall, and he later turned his reporting into a bestselling book. Hulu released the docuseries “The Dropout” this year starring Amanda Seyfried as Holmes, which dramatized the stunning story.