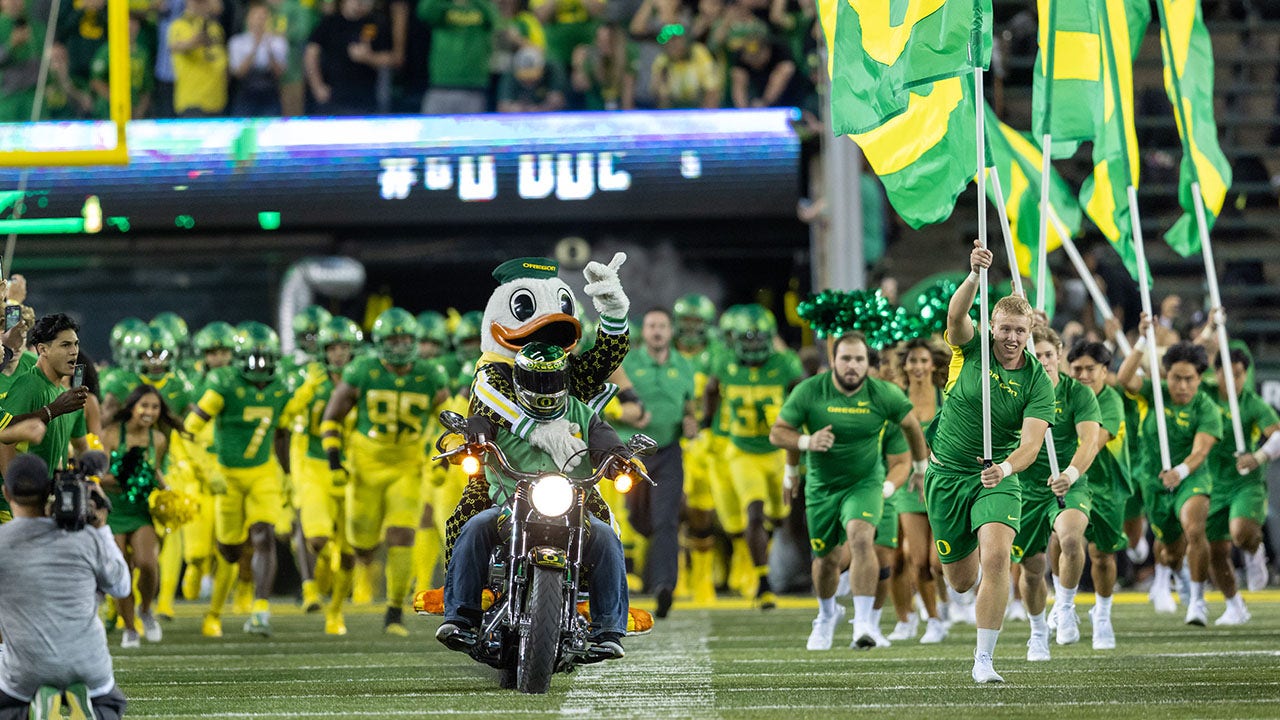 The world of college football had at least a few days to catch its collective breath after a Week 7 that saw one of the best regular season football games in history.

The Tennessee vs Alabama game will go down as one of the best games ever played, as the Vols finally took down Nick Saban and the Alabama Crimson Tide.

Week 7 saw two other top-25 games go down to the wire, with TCU beating Oklahoma State in double overtime and Utah handing USC its first loss on the season with a two-point conversion with 0:48 seconds left on the clock.

A phenomenal weekend of college football usually means a letdown is just around the corner, but with five games between top-25 teams on the Week 8 slate, a letdown is not on anybody’s mind.

Let’s look at a few games to be aware of Saturday as the college football season kicks off Week 8.

The Clemson Tigers have a chance to set the ACC record for consecutive home wins on Homecoming as they look for their 38th win in a row, surpassing Florida State’s record of 37 from 1992-2001. Syracuse is looking for its best start to the season since 1987 one week after upsetting NC State at home.

It’s the third game this year for Clemson against an undefeated ranked opponent, and the Tigers have won eight of nine against Syracuse since the Orange joined the ACC in 2013.

Quarterback DJ Uiagalelei has thrown 17 touchdowns and just two interceptions one year after having more picks than touchdowns. He has also been dangerous on the ground, rushing for 337 yards and four touchdowns.

“Their offense has changed dramatically based off of his improvement,” Syracuse coach Dino Babers said of Uiagalelei. “And it’s a testament to him. He’s a good spirit, a good person, and I’m glad for his success.”

The Syracuse defense will be tasked with slowing down Uiagalelei and the Clemson offense, something Syracuse has done all season, as they have the top-ranked defense in the ACC. The Orange defense leads the conference in yards allowed per game (268.8), passing yards per game (173.8), and points allowed (13.2 points per game).

Syracuse quarterback Garrett Shrader is the engine to the Orange offense, throwing for 12 touchdowns with a 69.5 completion percentage.

Garrett Shrader, #6 of the Syracuse Orange, runs the ball as Payton Wilson, #11 of the North Carolina State Wolfpack, attempts to tackle Shrader during the third quarter at JMA Wireless Dome on Oct. 15, 2022 in Syracuse, New York.
(Bryan M. Bennett/Getty Images)

“I think we’ve kind of built our identity, what we want to be moving forward,” Shrader said. “We’ve got guys that are emerging. We found out who can do some things, who we need to get the ball to the most and other guys that are capable and put them in situations within their wheelhouse to do what they’re good at.”

With USC losing to Utah in Week 7, UCLA is the lone undefeated team remaining in the Pac-12, but a trip to Autzen Stadium in Eugene, Oregon, will be their toughest test of the season.

Oregon has won five straight since getting smacked by Georgia in Week 1, and the matchup with the Bruins is the first top-10 game at Autzen since 2014. UCLA has not won in Eugene since 2004, and Oregon has won 22 in a row at home.

The Oregon Ducks run on the field before their game against the Stanford Cardinal at Autzen Stadium on Oct. 1, 2022 in Eugene, Oregon.
(Tom Hauck/Getty Images))

“We know it’s going to be electric here and that’s something we can count on to our advantage,” Oregon safety Bennett Williams said, according to ESPN.

It will be a matchup between the top two rushing offenses and the top two defenses against the run in the Pac-12.

UCLA UPSETS NO. 15 WASHINGTON TO REMAIN UNDEFEATED, FIRST 5-0 START SINCE 2013

With the rushing games and rushing defenses so easily matched, this game may come down to the two quarterbacks.

UCLA’s Dorian Thompson-Robinson leads the country in completion percentage (74.8%) and has thrown 15 touchdowns and just two interceptions while rushing for four touchdowns on the ground.

UCLA Bruins quarterback Dorian Thompson-Robinson, #1, runs with the ball during the college football game between the Utah Utes and the UCLA Bruins on Saturday, Oct. 8, 2022 at the Rose Bowl in Pasadena, California.
(Ric Tapia/Icon Sportswire via Getty Images)

“We really haven’t played anybody quite like him, in my opinion,” Oregon head coach Dan Lanning said this week. “He’s a dynamic player. Anytime he touches the ball it can turn into an explosive play. So that’s showing up for them.”

On the other side is Bo Nix, who transferred from Auburn in the offseason.

Since the season-opening loss to Georgia, Nix has thrown 12 touchdowns and one interception, rushing for eight scores on the ground.

Both teams have a loss in the conference and need to avoid a second to keep hope of competing for a spot in the Big 12 Championship Game.

Oklahoma State is coming off of an excruciating double-overtime loss to TCU, but much will hinge on the health of quarterback Spencer Sanders, who has been dealing with a shoulder injury. His status for Saturday’s game is uncertain.

Oklahoma State head coach Mike Gundy was not tipping his hand earlier in the week when asked about who will be playing against the Longhorns.

Oklahoma State Cowboys Head coach Mike Gundy cheers on his team as he walks onto the field for a game against the Texas Tech Red Raiders at Boone Pickens Stadium on Oct. 8, 2022 in Stillwater, Oklahoma.
(Brian Bahr/Getty Images)

“You wouldn’t reveal your hand either,” Gundy said Monday, according to Sports Illustrated. ” It’s not smart on my part … It’s not smart to show our hand.”

For Texas, Saturday’s game is important for the Steve Sarkisian era as the Longhorns are 1-5 in true road games under the second-year head coach.

Quinn Ewers, #3 of the Texas Longhorns, throws a pass before the game against the Iowa State Cyclones at Darrell K Royal-Texas Memorial Stadium on Oct. 15, 2022 in Austin, Texas.
(Tim Warner/Getty Images)

“I think poise and composure are really important on the road,” Sarkisian said this week, “And when adversity strikes on the road, that doesn’t have to mean it’s adversity for the next quarter, it can be for that one play, and then you’ve got to have the ability to move on to the next.”

Quarterback Quinn Ewers will be playing in his third straight game since returning from a Week 2 injury, and will be going against a defense allowing 301.0 yards per game through the air.

Nick Saban and Alabama are in an unfamiliar position.

Coming off an excruciating loss to Tennessee on Saturday, Alabama will be looking to avoid back-to-back losses in the regular season for the first time since 2007, Saban’s first year in Tuscaloosa.

“After the game on Saturday, I heard a lot of guys say, ‘We know this feeling, we know how to bounce back,'” Alabama linebacker Will Anderson Jr. said.

The Crimson Tide have been their own worst enemies, committing 17 penalties for 130 yards against Tennessee, including seven in the first quarter. There were also mental mistakes for Alabama, who committed an egregious special teams mistake in the second quarter that led to seven points for the Vols.

Alabama has committed more penalties than any other team in FBS (66).

The defense was shredded for 567 yards and seven touchdowns, allowing the Vols to get into field goal range with just 15 seconds left in the fourth quarter,

However, there were positive signs for Alabama with quarterback Bryce Young returning from injury and looking brilliant with 455 yards passing and two touchdowns.

Mississippi State is coming off of a disappointing loss to Kentucky in Week 7, but after Tennessee quarterback Hendon Hooker lit up the Alabama defense, all eyes will turn to Bulldogs quarterback Will Rogers.

Will Rogers, #2 of the Mississippi State Bulldogs, against the Kentucky Wildcats at Kroger Field on Oct. 15, 2022 in Lexington, Kentucky.
(Andy Lyons/Getty Images)

“It’s been a lot of elite defenses here, a lot of great guys that’s built a lot of tradition here,” Anderson said. “It’s a lot of anger and frustration that we lost something so precious to us, that was really big to us.

“But I think it’s gonna be a good week for us to take the challenge on and to continue to improve as a defense and get ready for Mississippi State.”

It’s not the usual names at the top of the Big 12, but Saturday night’s game in Fort Worth, Texas, will be for first place in the conference as both teams are undefeated in conference play.

The Horned Frogs are going for their fourth consecutive win over a ranked opponent while Kansas State is coming off of a bye week.

Wildcats quarterback Adrian Martinez has been a revelation for Kansas State after transferring from Nebraska in the offseason. Martinez has thrown for four touchdowns with zero interceptions while rushing for 546 yards and nine touchdowns.

“Part of it is his maturity, the fact that he’s played so much football and I think coach [Collin] Klein [offensive coordinator] is putting them in some really good situations and calls to be successful and us trying to stay ahead of the chains and not being in a bunch of third-and-eight-plus, where you might typically force the ball, and being in a lot more third and shorts,” Kansas State head coach Chris Klieman said, according to ESPN.

“It opens up the playbook a little bit more, and he’s making good decisions.”

On the other side is TCU quarterback Max Duggan, who is coming off a two-touchdown performance against Oklahoma State.

Max Duggan, #15 of the TCU Horned Frogs, throws against the Oklahoma State Cowboys during the first half at Amon G. Carter Stadium on Oct. 15, 2022 in Fort Worth, Texas.
( Ron Jenkins/Getty Images)

He will be tasked with trying to decipher a Kansas State defense that is second in the Big 12 in points allowed per game (16.7) and third in passing yards (221.7 yards per game).