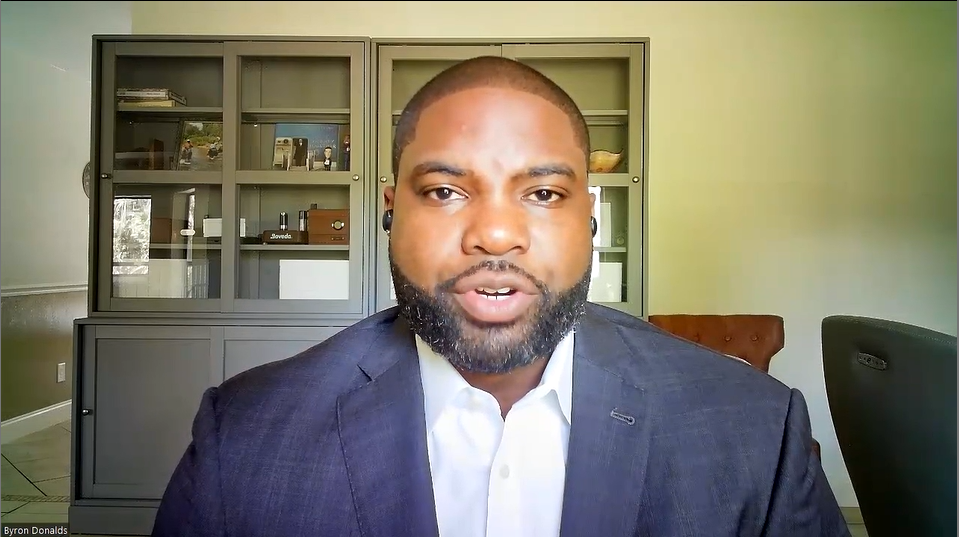 “It’s one thing when you’re voting no against Nancy Pelosi … that’s actually pretty simple because those ideas are just insane,” Donalds, R-Fla., said in an interview with Fox News Digital. “But going into a majority where we have a responsibility for governing, it’s important for every member of the … conference … to have their hand in how we run things.”

Donalds announced that he was seeking the post last month and was quickly followed by Stefanik, R-N.Y., who announced she’d seek re-election to the job after the midterms. Stefanik unseated Rep. Liz Cheney, R-Wyo., as the conference chair last year after Cheney’s criticism of former President Trump.

Conference chair is the lead messaging position for House Republicans, and Donalds says his strategy would be to engage across platforms, genres and regions.

Rep. Byron Donalds, R-Fla., announced last month he is running to be the chair of the House GOP Conference in the next Congress.
(Tyler Olson/Fox News)

“Republicans need to be consistently communicating … on the local level, the regional level and the national level,” he said. “It’s not just with the political news media. … It’s on the ‘Today’ show. We see it on ‘The View’ every single day. It’s on Comedy Central, it’s on HBO, it’s on ESPN and on Fox Sports.”

The expectation among most Republican aides and observers of the conference is that Stefanik likely will win the post by a wide margin. She’s spent significant time campaigning for many members, particularly women members, through her E-PAC. And she has the public support of both House Minority Leader Kevin McCarthy, R-Calif., and Minority Whip Steve Scalise, R-La.

Former President Donald Trump also encouraged Stefanik to return for another term as conference chair, Stefanik previously told Fox News, which could become a factor in the race.

But Donalds says his message is connecting with more people than others may expect and is optimistic he can make the secret-ballot race competitive.

Rep. Byron Donalds, R-Fla., says he wants Republicans to get their message out on more than just the national political media.
(Fox News Digital)

“I would tell people who think it’s a foregone conclusion, not so fast.”

Donalds said that even if he loses, he hopes his campaign leads to conversations among Republicans about ensuring power in the party isn’t fully centralized in leadership.

“I’m going to be a lot more outspoken internally about what we should be doing as a conference,” Donalds said about the upcoming Congress. “We’ve all worked hard. Everybody’s campaigned hard. And so the members who are duly elected by the people who sent them should be able to have their voices heard.”

“But also, just making sure that there’s that back and forth, there’s that dialog between members no matter what part of the conference they might be in, and even with the leadership,” he added. “It also builds buy-in. If everybody knows that they have kind of a hand in making the dinner, everybody feels confident.”

Donalds’ ideas mirror some points in a guide the House Freedom Caucus recently sent to all new GOP candidates about what it views as issues in the House. Donalds is a member of the Freedom Caucus.

The 52-page document lays out a “reality check” for members, noting that members haven’t been able to offer open amendments on House bills for years, that they are unlikely to have an impact on major spending decisions and that committee assignments are more based on fundraising than expertise.

Among other things, the document recommends sending more legislation through committees, rather than directly through leadership, and expanding the GOP steering committee to reduce top Republicans’ power in the body.

Republicans will hold elections for leadership posts in their party the week after the midterms.