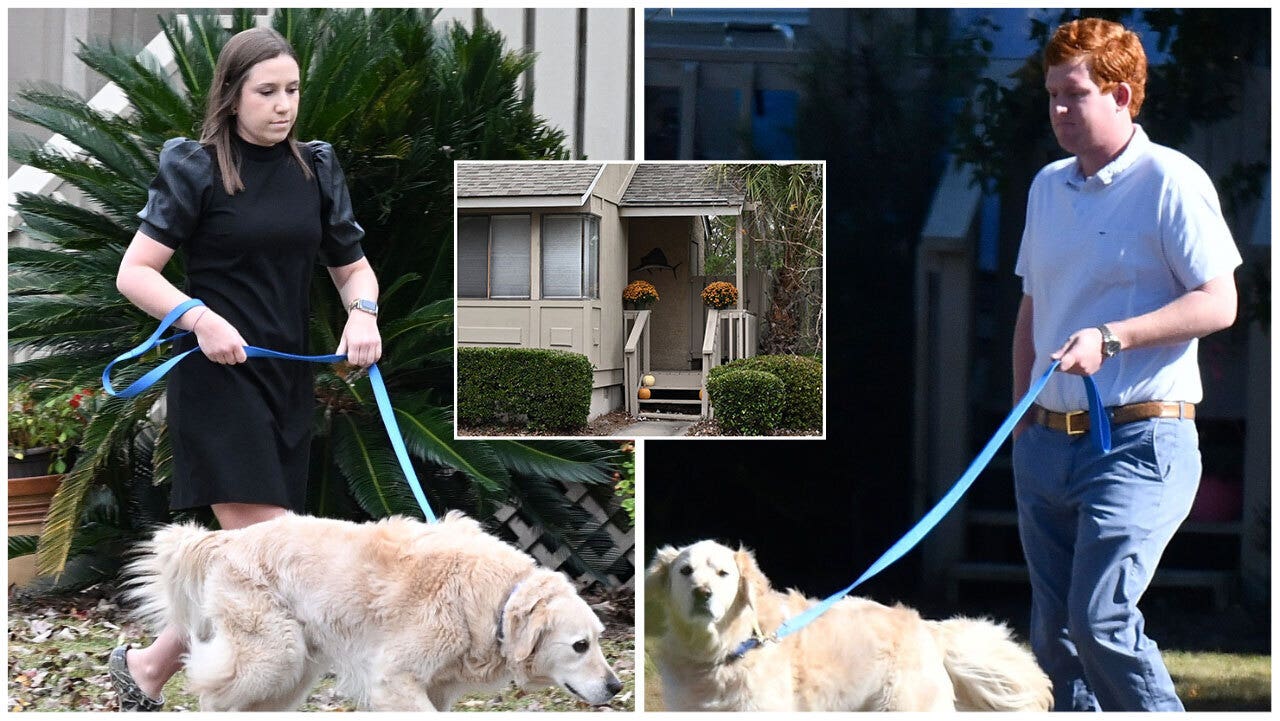 Buster, and Brooklynn White, both 26, live with their beloved golden retriever, Miller, in a modest one-bedroom Hilton Head Island condominium — a far cry from the sprawling 1,700-acre hunting farm, known as Moselle, where he grew up in Islandton, South Carolina.

The fallen patriarch is slated to go to trial Jan. 23 for the shocking double homicide. Buster has continued to support his disbarred and jailed father.

On Tuesday morning, Buster, wearing a downcast expression, pulled up in his gray GMC Yukon outside the Georgia apartment, then carried a basket of laundry inside before leaving.

The home, which features a blue Marlin decoration on the front porch, is in a complex with a communal pool, a tennis court and a gym.

It’s unclear when Buster and White began dating — but she accompanied him to the joint funeral of Paul and Maggie, according to a source.

She was seen comforting her beau as he cried at the service, and she affectionately interacted with his father, the source added.

ALEX MURDAUGH 911 CALL CAME AN HOUR AFTER HE ARRIVED AT PROPERTY, WHERE SON, WIFE WERE FOUND DEAD: DOCUMENTS

More than 17 months after the murders, the slain mother and son’s graves in Hampton Cemetery still don’t have headstones and are marked by small plastic plaques.

White, who’s from Rock Hill, South Carolina, bought the Hilton Head condo for $180,000 in July 2021 after landing her first job out of law school at Olivetti McCray & Withrow, where she specializes in probate and estate planning, according to the firm’s website.

She declined to answer questions Wednesday morning on her boyfriend’s state or the case against his father, politely responding to several requests for comment with a simple, “No, ma’am.”

The apartment on Hilton Head, a vacation destination known for its pristine beaches and golf courses, is about 70 miles from Buster’s childhood home.

From left, Buster Murdaugh, 26, his mother Maggie Murdaugh, his brother Paul Murdaugh and his father Alex Murdaugh. Alex is accused of fatally shooting Maggie, 52, and their son, Paul, 22, June 7, 2021.
(Facebook)

White attended the University of South Carolina Law School alongside Buster, who was allegedly kicked out in his second semester for plagiarism, the Wall Street Journal reported.

Alex paid an attorney $60,000 to try to get Buster readmitted, according to FitsNews.

Buster has kept a low profile since igniting a firestorm in October 2021 when he was photographed in public with his uncle, John Marvin Murdaugh, gambling and drinking at The Venetian in Las Vegas.

The latest Buster sighting comes the same week that the federal trial of banker Russell Laffitte kicked off — the first criminal case stemming from the spectacular unraveling of the Murdaugh dynasty to go before a jury.

Laffitte, the former Palmetto State Bank CEO, is charged with bank fraud, wire fraud and other crimes for allegedly helping Murdaugh fleece his personal injury clients out of their settlement money.

The South Carolina graves of Maggie and Paul Murdaugh in Hampton Cemetery marked by temporary plastic plaques in November 2022 — 17 months after their bodies were laid to rest.
(Mark Sims for Fox News Digital)

Although a central figure in that federal case, Alex hasn’t been charged. But he has been indicted on more than 80 counts of financial crimes in state court in connection to the alleged theft of $8.5 million from his clients’ settlements.

Prosecutors revealed Tuesday at Laffitte’s trial that Alex was first confronted about financial irregularities at the family’s once illustrious personal injury law firm the same day his wife and son were murdered.

The firm, formerly known as Peters, Murdaugh, Parker, Eltzroth & Derrick, P.A., accused Alex of misappropriating funds and forced him out.

Days after he lost his job, Alex was shot in the head in a failed assisted-suicide plot allegedly designed to leave Buster a $10 million life insurance policy.

The Murdaughs, a prominent Democratic family, had wielded enormous judicial and political power for over a century. Four generations served as the local prosecutor, known as the solicitor, who oversees the five counties at the southern tip of the state.

But their dominance began to wane in 2019 after Paul was accused of drunkenly slamming his father’s boat into the pilings of a bridge in Beaufort, killing 19-year-old Mallory Beach, injuring four others and triggering a series of lawsuits that shone a spotlight on Alex’s alleged crooked financial dealings.

Clockwise from left Anthony Cook, Connor, Cook, Miley Altman and Mallory Beach. The friends were in a boat with a drunken Paul Murdaugh when it crashed into a bridge killing Beach, 19, and injuring the other three.
(Facebook)

Buster was also named as a defendant in the Beach suit for allegedly letting Paul, who was underage, use his ID to buy alcohol for the doomed boating trip. The civil case is scheduled to go to trial in January.

Since the double slaying, the South Carolina Law Enforcement Division (SLED) reopened investigations into the mysterious 2015 death of Buster’s classmate Stephen Smith, with whom he was rumored to be having a secret affair.

Authorities also launched a fresh probe into the 2018 death of the Murdaugh’s long time housekeeper.

A booking photo of Alex Murdaugh, 54, embedded in an image of the Colleton County Courthouse, where Alex Murdaugh will stand trial on charges that he murdered his wife, Maggie, and son, Paul, early next year.
(Mark Sims for Fox News Digital/ Colleton County Detention Center)

A new HBO docuseries “Low Country: the Murdaugh Dynasty” that aired earlier this month features a series of jail calls between Alex and his son, which were recorded at the Alvin S. Glenn Detention Center.

In one recording, Alex asks Buster whether “Brooklynn” got his letter. In several of the calls, which the series did not air, Alex speaks directly with White, who addresses him as “sir” and speaks warmly to him.

In another call, Alex encourages Buster to return to the Murdaugh estate where his brother and mother were shot to death.

“I think the dam feeders were full over there at Moselle,” Alex says. “If you felt like going back there, I bet with nothing going on, I bet there’s deer all over them things.”

Buster, who sounds unsettled by the proposition, replies, “I’m not going hunting out there.”

Haley Chi-Sing contributed to this report.

Rebecca Rosenberg is a veteran journalist and book author with a focus on crime and criminal justice. Email tips to rebecca.rosenberg@fox.com and @ReRosenberg.