Bear attacks woman who's walking her dogs, she plays dead even with 'crunched' skull 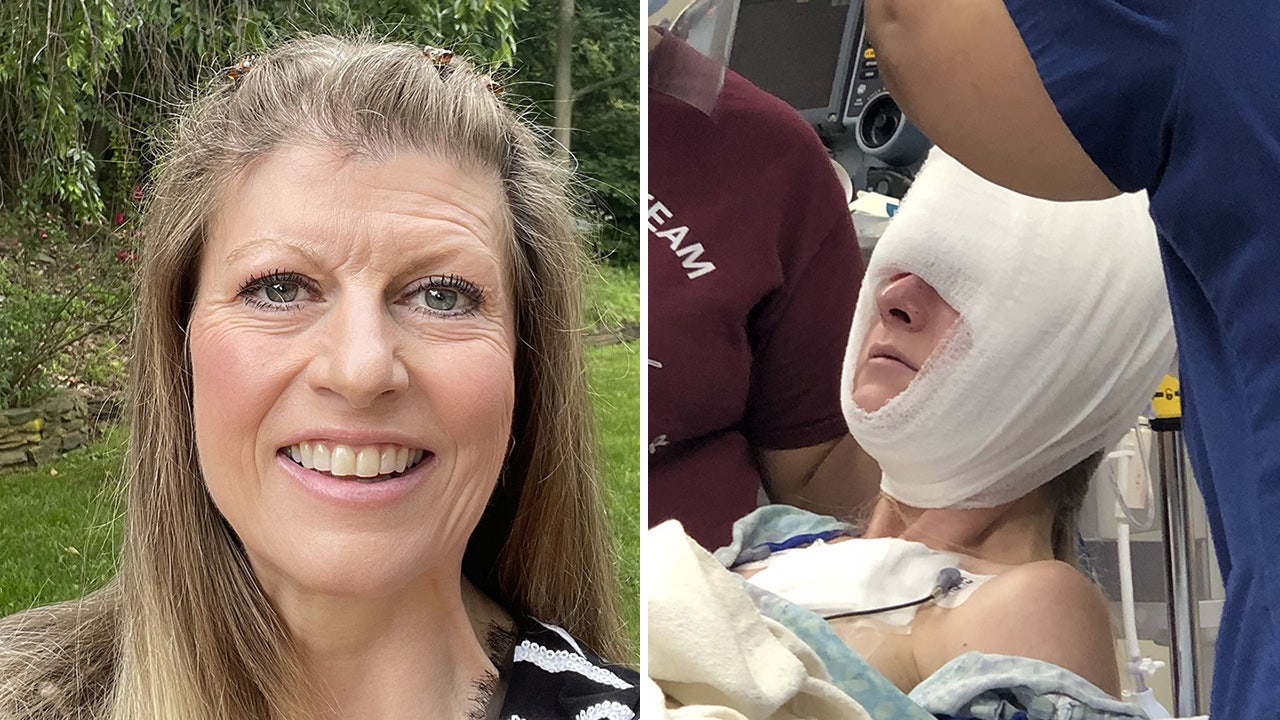 A woman was walking her two German shepherds near her home when the three of them encountered a wild bear — which then attacked her after one of her dogs charged.

Renee Levow, of Frederick County, Maryland, was walking her two dogs, Kylie and Bones, when they came across a large bear.

Kylie lunged at the bear and tried to fight it — and that’s when the bear locked eyes with Levow.

The 55-year-old said she did what she was always told to do when encountering a bear in the wild: Be loud and act big.

However, this move backfired — as the bear now came at her.

The bear attack took place on a concrete path near Renne Levow’s home in Frederick County, Maryland, as she was walking her two dogs.
(Kennedy News and Media )

Levow recalled the scary experience as the bear attacked her all over her body, she said.

“After a few seconds, he swatted me down and then bit my left leg twice just above my knee, and then he tossed me to the side and continued to bite me,” she said.

Levow’s German shepherds Kylie and Bones were with her during the bear encounter. The dogs were not injured during the incident.
(Kennedy News and Media )

Levow said the sound was awful.

She really thought she was going to die, she said.

“Then, he bit me again on the right side of my scalp, above my eye, severing the nerves,’ she said.

Renee Levow said she thought she was going to die after the bear attack.
(Kennedy News and Media )

The only thing Levow could think to do at that point, in order to get the bear to stop, was to play dead.

Levow covered her head with her arms and rolled flat on the ground — which is when the bear became uninterested and left the scene, she said.

Levow said her face was dripping blood and she had to wipe the blood off her phone before she could call 911. She’s shown here as medical professionals tend to her after the bear attack.
(Kennedy News and Media )

Levow said she lay there for 10 minutes to make sure the bear was gone.

She then pulled out her phone to call 911 — and had to wipe off the dripping blood from her phone screen.

“I’m thankful he left me alone and I’m alive.”

“I was lucky because we have a local fire department and the chief that was on call lives just at the end of my street — so he came to my aid and started wrapping my injuries,” she said.

Levow has scarring from her stitches. Some of the injuries to the left side of her face can be seen in this photo.
(Kennedy News and Media )

She was later airlifted to Johns Hopkins Hospital in Baltimore, Maryland.

There, she underwent surgery to fix her orbital fracture, severed nerves and the open wounds on her scalp, face, chest and left leg.

Levow said she could not feel any of her injuries, as her adrenaline was high at the moment.

Levow has since recovered — and says she feels lucky to be alive.
(Kennedy News and Media )

Now, over two years later, Levow said she feels lucky to be alive and healing — but still has scars from the attack.

“I have a scar on my chest from where he initially swatted me to the ground, and then I have damage to my left leg above the knee where he took two bites,” she said.

“I also have permanent nerve damage on my scalp, face and leg — but I’m thankful he left me alone, and I’m alive.”

Neither of Levow’s dogs were injured during the attack.

“If the bear makes contact, it’s advisable to lay face down on the ground and with your hands protecting your neck.”

Taylor Phillips, owner of Jackson Hole EcoTour Adventures in Wyoming, told Fox News Digital that playing dead is the best way to react when encountering a bear by surprise.

“If the bear makes contact, it’s advisable to lay face down on the ground and with your hands protecting your neck,” he said.

A black bear sits on a grassy hill. “Bears may bluff their way out of an encounter by charging and then turning away at the last second,” the NPS says.
(iStock)

Phillips said if you encounter a bear from a distance and it approaches you — fight back.

“Yell, throw objects and fight as your life depends on it,” he said.

The National Park Service (NPS) offers this advice — and more — when encountering bears in the wild.

“Stay calm and remember that most bears do not want to attack you; they usually just want to be left alone. Bears may bluff their way out of an encounter by charging and then turning away at the last second,” the NPS says.

“Bears may also react defensively by wooﬁng, yawning, salivating, growling, snapping their jaws, and laying their ears back,” the NPS says as well.

“Continue to talk to the bear in low tones; this will help you stay calmer, and it won’t be threatening to the bear. A scream or sudden movement may trigger an attack. Never imitate bear sounds or make a high-pitched squeal,” the service adds.