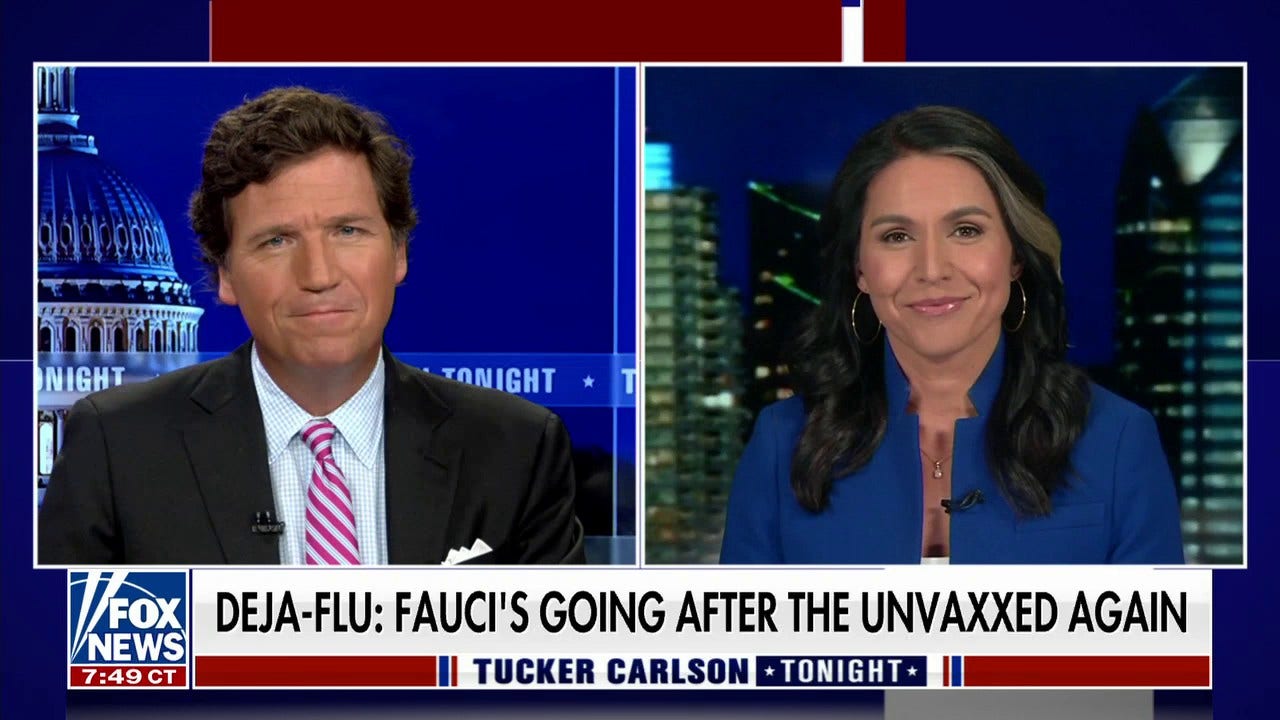 The White House is under fire after Press Secretary Karine Jean-Pierre shut down reporters asking outgoing chief medical adviser Dr. Fauci about the origins of COVID during a heated briefing.

During her first interview as a Fox News contributor, Tulsi Gabbard joined “Tucker Carlson Tonight” Tuesday to discuss the fiery exchange and how she believes Fauci has endangered Americans through his deceit during the pandemic.

“We can’t deny the danger that he has created for the American people, not only with regard to his refusal to answer questions about the origins of COVID and gain of function research, and how it is very likely continuing on that we are paying for, but also the other big lies that he’s continued to propagate, even in his press conference today about masks,” Gabbard told Tucker Carlson Tuesday.

“He’s telling people ‘mask up,’ knowing full well that when people hear that, they’re going to throw on a cloth mask or a mask like the one he’s wearing in that picture that you’re showing or paper mask, knowing that they don’t do anything to prevent someone from getting COVID or spreading COVID,” she continued. “They continue to lie to the American people, and it’s putting the American people at risk.”

During a White House press briefing on Tuesday, Daily Caller White House correspondent Diana Glebova tried to ask Fauci about the origins of COVID, but Jean-Pierre quickly shut her down.

When Glebova objected, Jean-Pierre said she was “done” and was “not getting into a back-and-forth with you.”

Today News Africa journalist Simon Ateba subsequently spoke up, saying her question was valid and should be asked.

“You need to call people across the room. She has a valid question, she’s asked about the origin of COVID,” Ateba said.

“It is not your turn,” Jean-Pierre shot back. “I hear your question, but we’re not doing this the way you want it. This is disrespectful … Simon, I’m done. Simon, I’m done. I’m done with you right now. You’re taking time away from your colleagues.”

Carlson ripped the “embarrassing” questions from some of the other reporters to Fauci, including one on masks becoming a “pejorative” term in some communities.

Fox News medical contributor Dr. Marty Makary joined “Fox & Friends” on Wednesday, calling out Fauci’s “arrogance” and addressing his legacy as he is set to step down from his role in December.

“People want humility in a doctor,” Makary told co-host Brian Kilmeade. “Sometimes the right answer is, ‘I don’t know,’ or ‘do that research yourself quickly with your entire $45 billion that you have at the NIH.’”

“He’s got a nice demeanor,” he continued. He’s a gentleman. I think he’s done some good work in warning seniors about the risk of COVID, but insisting on firing pilots and truck drivers and soldiers? That is not a meager position. That was arrogance. And now we’ve learned that was counterproductive.”

“Fox Across America” radio host Jimmy Failla echoed Makary’s sentiment, calling out Fauci for silencing those who did not agree with him.

He noted his leadership throughout the pandemic widened the “distrust” between Americans and public officials.

“He did more to further the distrust between America and our public health initiatives than anybody in history,” Failla said on “Fox & Friends First” Wednesday. “Number one, because of all the changes, all the audibles we’ve talked about at length: no masks. Unmask. I can’t believe it’s not a mask.”

“But then there’s the other aspect of this, which was, yes, it was silencing dissent, collaborating with big tech to silence any type of question into the COVID origins, and even to this day, on the way out the door, what was he doing? He’s telling everybody they’ve got to get vaccinated and boosted.”