Three mermaids in California save scuba diver from drowning: 'Not just pretty tails and smiles' 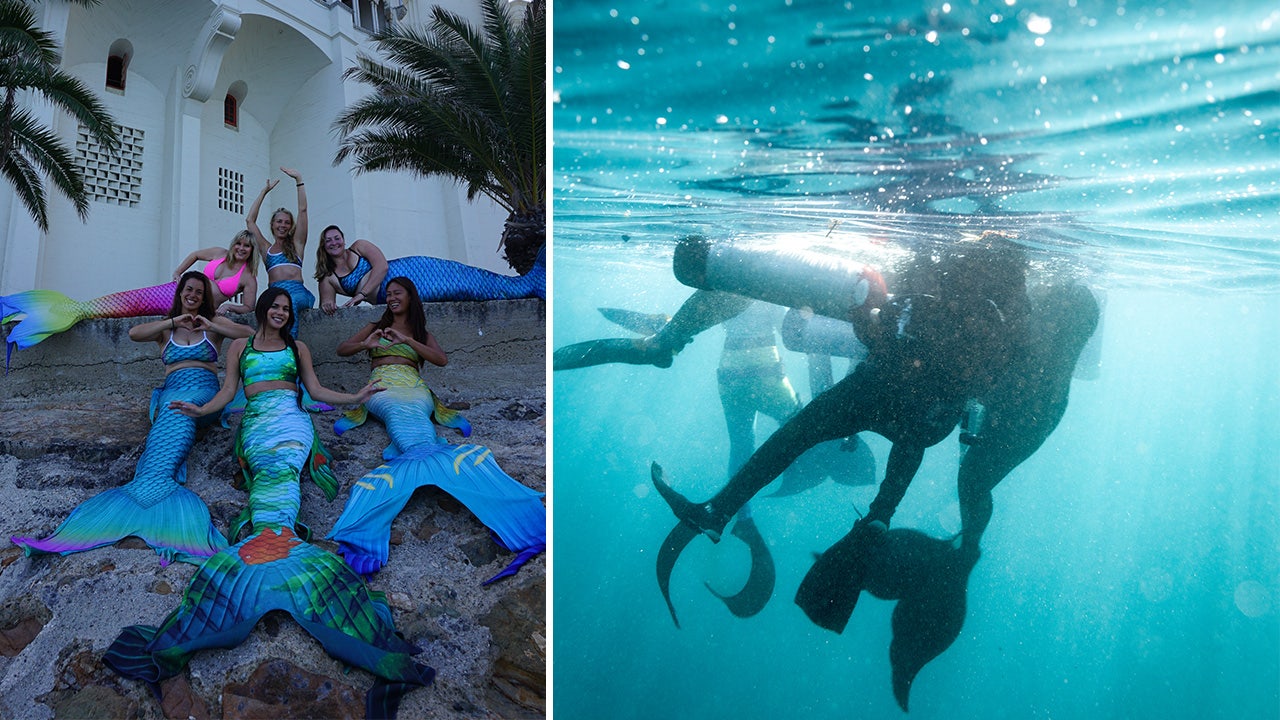 A trio of mermaids rescued a man from drowning after he lost consciousness towards the end of his scuba dive in California.

Pablo Avila, his son and a friend had chosen to scuba dive during a trip to Catalina Island — the southernmost island of California’s Channel Islands — on Sunday, Oct. 23, which fell on the second day of a mermaid training course at Casino Point, which is also located on Catalina Island.

Elle Jimenez, 33, of Miami, a professional mermaid performer and diver who has six years of experience, was teaching an advanced mermaid course certified by the Professional Association of Diving Instructors (PADI).

“This was my first time teaching the course in California,” Jimenez told Fox News Digital.

Around midday, Jimenez and her class heard someone shout, “Help! He blacked out!” a short distance from where they were training in open water.

Jimenez and her students Elaina Marie Garcia, 26, and Great Chin Burger, 37, sprang into action to provide rescue all while donning their mermaid fins.

Jimenez, Garcia and Burger were the only mermaids who could provide help, since the rest of the class was not certified in rescue or instruction. That’s according to Julie Andersen, PADI Worldwide’s San Diego-based global director of brand, who was present during the mermaid class and witnessed the incident.

MERMAID MOMENT: WOMAN TEACHES PEOPLE ‘HOW TO BE’ AN OCEAN MERMAID

“We safely kept our distance ensuring we did not complicate the situation,” Andersen told Fox News Digital.

The three-piece mermaid pod swam to Avila and his scuba companions and helped them remove his heavy dive gear.

“Elaina got to Pablo first, and right after Great Chin then me,” Jimenez said.

“I think we all went on automatic — and our rescue mode turned on.”

Garcia said Avila was foaming at the mouth and was unconscious by the time they reached him.

“I gave him rescue breaths in the water,” Garcia told Fox News Digital. “My training kicked in, and I had the muscle memory I needed to get his scuba gear quickly and efficiently off. Great Chin helped me remove his weights, and all the while giving a breath every five seconds.”

Jimenez and Garcia can be seen wearing signature mermaid monofins, while Burger is wearing bifins.

The images show the mermaid trio hoisting Avila and his scuba tank near the Gulf of Santa Catalina’s surface.

Elle Jimenez, Elaina Garcia and Great Chin Burger are seen holding up a scuba tank while they try to save scuba diver Pablo Avila from drowning in Catalina Island, California, on Sunday, Oct. 23. The trio is wearing mermaid-like fins while they complete the rescue.
(Darren Joshua Leonardi/NATIV Productions)

Jimenez and Garcia can be seen wearing signature mermaid monofins while Burger is wearing bifins.

“I think we were all meant for these roles and that moment proved we were exactly where we needed to be,” Jimenez said.

Looking back, Jimenez said she was focused on saving the life of a fellow diver.

She trusted her monofin and mermaid tail because she knows “how efficient and fast they are.”

Jimenez said it’s “incredible” to know that a group of mermaids can save a scuba diver in a pinch.

This includes one of Avila’s dive buddies, who reportedly received swim guidance and calming breathing techniques after she noticed he was panicking and in distress.

“It has been empowering and humbling at the same time,” Jimenez said.

REAL LIFE ‘MERMAID’ SWIMS WITH WHALES FOR A GOOD CAUSE

Considering herself a “lifelong mermaid,” Garcia said she received her scuba certification at age 14, She went on to become a springboard diver and mermaiding hobbyist.

“I have always been drawn to the water,” she  told Fox News Digital. “I officially started mermaiding with a tail four years ago and found my passion all over again.”

“It feels surreal to have rescued Pablo like this. I feel so many emotions,” she continued.

“I’m proud of the way we handled the rescue. It was absolutely a team effort. I also feel a great sense of relief that Pablo survived, as I believe it’s rare to come back from needing full CPR to breathing, talking and smiling.”

“It feels amazing to know I not only was able to help save someone.”

Garcia added that she feels a strong bond with Jimenez, Burger and Leonardi.

She said, “We will always be friends.”

Burger, who has three years of experience as a freediver and a year of mermaiding experience, said “it feels unreal” to have rescued someone in a setting that’s “supposed to be fun.”

“We all dived in to help,” Burger told Fox News Digital. “It feels amazing to know I not only was able to help save someone, but that person recovered well [after] the last time he was in our arms, unconscious and not breathing.”

Burger said she can’t help but cry every time she thinks about Avila’s frightening condition during the rescue — yet seeing him smile and laugh afterward makes her “heart so happy.”

She noted that some people struggle to believe her when she tells them she works as a professional mermaid and mermaid tail ambassador.

“I hope this incident helps the mermaid community get the respect we deserve as well as show others that it is a serious sport,” Burger said.

“It’s not just pretty tails and smiles, but we can save lives too … with grace.”

She recalled seeing throngs of divers and scuba divers at Catalina Island that day.

“Little did we know how well-trained the [mermaids] really are.”

Avila and his dive party reportedly thanked PADI and the mermaids for the remarkable fairytale-like rescue, according to Andersen.

As a student of Jimenez’s advanced mermaid course, Andersen learned firsthand that it’s not an easy sport.

“While many imagine a mermaid class is all bubble kisses, glitter makeup and dolphin kicks, our pool session on Saturday proved that is a small component of it,” Andersen said.

“We were quickly immersed in the athleticism, confidence and composure needed in the course.”

“To put it frankly, not only is mermaiding not as easy as PADI-certified mermaids make it look, the discipline requires a considerable amount of grace, water skills and most importantly, safety training,” she continued.

“The PADI mermaid rescue team reminded me that not only are mermaids real, but they are the superheroes our blue planet needs — with the power to step up and spread hope wherever they flip their tails.”

Avila’s son and friend spoke with FOX 11 Los Angeles in October. They said Avila is recuperating.

“We had seen the mermaids before starting our dive. And were thinking how cute they were,” Javier Claramunt, Avila’s son, told the local news station.

“Little did we know how well-trained they really are,” he said.