Thanksgiving vilified by media and schools as a celebration of ‘genocide,’ ‘imperialism’ 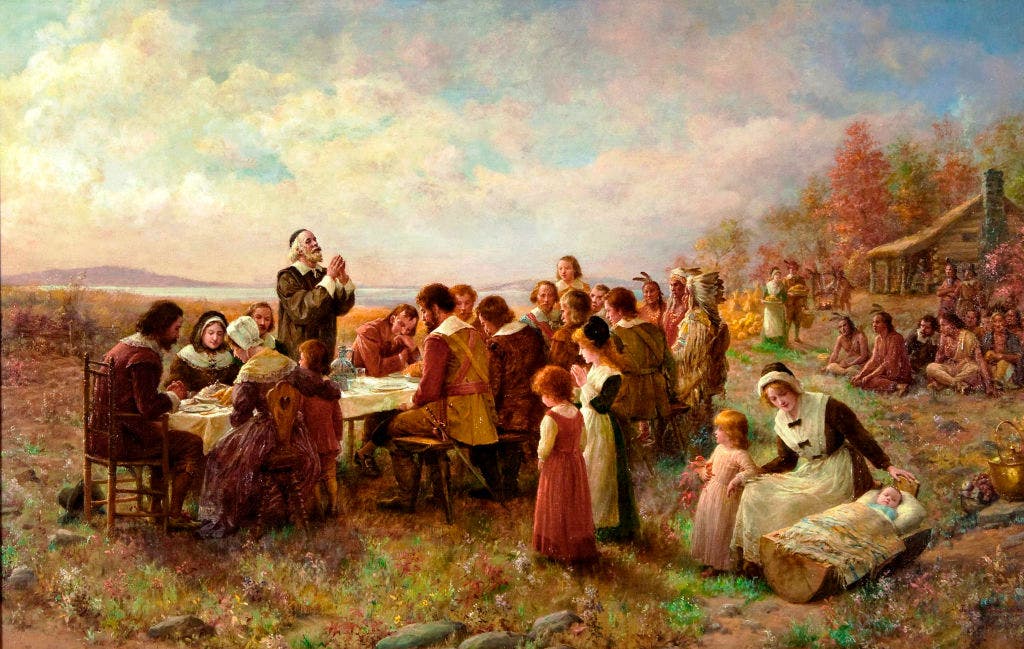 This week, millions of Americans will be celebrating Thanksgiving with family and friends, eating a good meal and watching football. But a creeping vilification of the popular holiday has spread across media outlets and schools, claiming that Thanksgiving is about “genocide” and “imperialism.”

The Saturday before Thanksgiving in 2021, MSNBC featured Native American activist Gyasi Ross to criticize the holiday.

“Instead of bringing stuffing and biscuits, those settlers brought genocide and violence,” he said.

The year before, on the November 21, 2020 edition of “AM Joy,” MSNBC regular Jason Johnson echoed a similar note.

“I know several people who call it ‘Colonizer Christmas,’ because they don’t really like the idea of what Thanksgiving represents,” Johnson said.

This mindset has also taken hold on college campuses. In 2013, Barnard College sent an e-mail to all students telling them as they headed to break: “Happy Turkey Week. Thanksgiving is complicated. We urge you not to forget that this holiday commemorates genocide and American imperialism.”

In 2019, the New Yorker connected the very existence of Thanksgiving to historical evils in America’s history: “Glorifying the endurance of white Pilgrim founders diverted attention from the brutality of Jim Crow and racial violence, and downplayed the foundational role of African slavery.”

A character on the long-running drama “Grey’s Anatomy” insisted in a 2021 episode that “Thanksgiving isn’t really a holiday we should celebrate. There’s no actual evidence Native Americans were even invited to a feast. I think they cared more about being colonized and having their land stolen than mashed potatoes.”

In an interview with FoxNews.com digital, Media Research Center Director of Media Analysis Geoffrey Dickens offered his explanation for why journalists and Hollywood are rejecting the holiday.

“A lot of this stems from the Marxist, anti-American ideology that is pushed in academia that a lot of the journalism school grads have been subjected to,” he said.

SECRETS OF GETTING INTO THE HOLIDAY SPIRIT THIS YEAR: GIVE BACK TO OTHERS

Dickens, who has written about the media’s distaste for Thanksgiving, added, “There is also a religious aspect to the holiday – expressing gratitude for blessings of faith, family and living in a free country — that sadly many in the secular press are not comfortable discussing.”

A modern recreation of the first Thanksgiving in the autumn of 1621 at Plimoth Patuxet Museums (formerly Plimoth Plantation) in Plymouth, Mass. Only half the Mayflower passengers, about 50, survived the first winter in Plymouth; while at least 90 Wampanoags attended the feast, according to Pilgrim Edward Winslow, who offered the only contemporary account of the first Thanksgiving.
(Courtesy of Kathy Tarantola/Plimoth Patuxet Museums)

Fox News digital also talked to Melanie Kirkpatrick. She is a senior fellow at the Hudson Institute, and the author of the 2016 book “Thanksgiving: The holiday at the heart of the American experience.” When it comes to education and Thanksgiving, “Elementary schools are doing a better job of teaching the First Thanksgiving. Native Americans are correctly presented as vital participants in the 1621 feast without whose help, the Pilgrims might not have survived.”

But, she warned, “That’s not true in high schools. If Thanksgiving is studied at all, it’s often misrepresented. A student at a prestigious New York public high school once told me that the roots of the holiday are found in English settlers’ custom of holding Thanksgivings when they killed Indians. That’s a gross misrepresentation.”

In her book, Kirkpatrick wrote of the message high schoolers are getting. The day is all about “cultural imperialism and the displacement and murder of Native Americans by European settlers.” She noted, “The online Zinn Educational Project, which provides lesson plans and supplementary material to accompany Howard Zinn’s leftist bestseller, ‘A People’s History of the United States,’ offers one example of the kind of material that some young people are being taught.”

That material, she concluded, is full of “inaccuracies and bizarre interpretations.”

THANKSGIVING: 12 FUN FACTS ABOUT THE HOLIDAY TO DISCUSS DURING DINNER

Thanksgiving is a growing a symbol of genocide and colonialism for Hollywood and the media.
(iStock)

According to Kirkpatrick, the strife that has engulfed our country on a daily basis distracts from Thanksgiving’s greater meaning.

“Amid all the political and cultural turmoil with which we live today, it’s sometimes easy to lose sight of our country’s many blessings. Thanksgiving Day is a good moment to reflect on the words of Benjamin Franklin, who called Thanksgiving a day of ‘public Felicity’ in which Americans give thanks, above all, for our ‘full Enjoyment of Liberty, civil and religious.’ That was 1785. Franklin’s words apply no less equally today,” she said.

She also noted that the Wall Street Journal has run the same Thanksgiving editorial every year since 1961 that is thankful that the United States remains the “longest enduring society of free men governing themselves without benefit of kings or dictators.”

“That’s indeed a reason to give thanks—on every day of the year,” Kirkpatrick said.

Scott Whitlock is an editor for Fox News Digital.