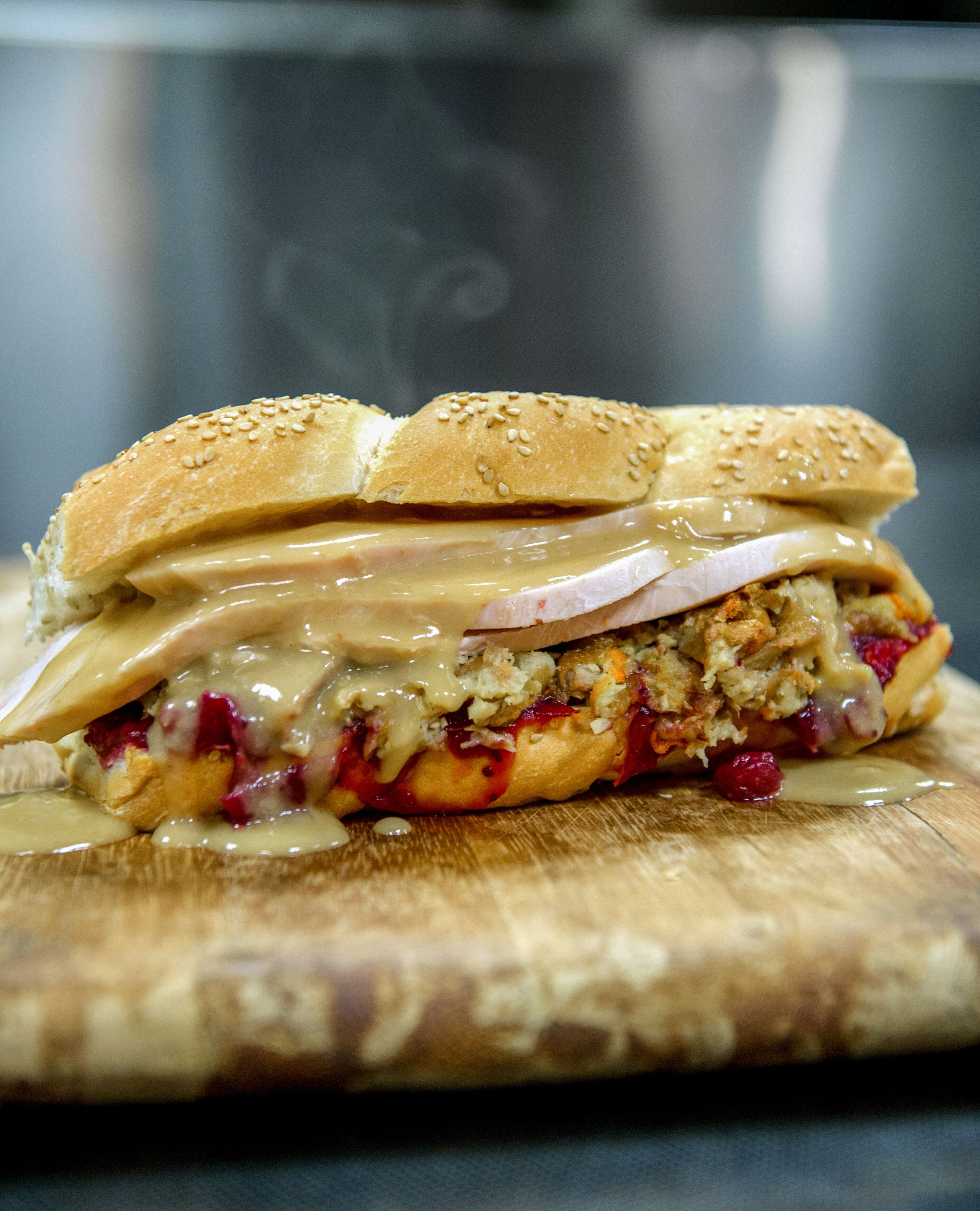 Beirut-born Boston chef Jay Hajj is America’s turkey master — and thankful every day for his own incredible immigrant success story.

The owner of beloved Mike’s City Diner in Boston’s South End has served fresh-roasted turkey and Thanksgiving dinner to loyal locals, political power brokers and legions of tourists every day for 27 years.

A frequent Food Network guest, Hajj learned over the years every imaginable trip to cooking the perfect turkey. He offers his three most important tips (below) to make your holiday bird crispier and more delicious than ever this year.

Among his tips: Cook your turkey standing up on its legs, not flat on its back — if you have room in your oven.

“It’s the signature dish of America, and that carries a lot of meaning for all of us.”

THANKSGIVING HISTORY: TRADITIONS AND ORIGINS, WHERE DID IT BEGIN?

His gravy is made by mixing the drippings with a stock made from a roasted turkey carcass.

Hajj devotes an entire chapter to turkey in his 2017 cookbook, “Beiruit to Boston: Comfort Food Inspired by a Rags-to-Restaurants Story.”

“Turkey’s the signature dish of America, and that carries a lot of meaning for all of us.” — Chef Jay Hajj

Turkey tip #1: Brine the bird for 12-24 hours to make it as moist as possible

A basic brine is nothing more than salt and water, plus spices to suit your fancy.

Turkey tip #2: Dry the turkey uncovered in the frig for extra-crispy skin

The refrigerator is a very dry environment. Exposing the skin to the dry, chilly air will make the skin crispier and darker as it cooks.

Simply put the bird in the refrigerator the night before you plan to cook it.

Turkey tip #3: Cook your bird standing up on its legs for extra-tender turkey

Yes, that’s right. Hajj cooks his birds standing up on their legs, held upright by a poultry roaster, rather than flat on their back like mere mortal Thanksgiving chefs.

Of course, he recognizes that not everyone has a home oven large enough to cook turkey standing up straight.

But if you do, Hajj swears by the method.

Cook your bird standing up on its legs for extra-tender turkey.

“The fat melts in a way that makes the meat more tender,” writes Hajj in his book.

THANKSGIVING DINNER: HOW TO SAVE MONEY ON THE SPECIAL MEAL THIS YEAR

He also cooks Thanksgiving dinner at home every year for 50 guests from his large Lebanese-Irish-American family.

“We cook thousands of turkeys at Mike’s every year, and this technique is one of our signature secrets,” he says.

A modern recreation of the first Thanksgiving in the autumn of 1621 at Plimoth Patuxet Museums (formerly Plimoth Plantation) in Plymouth, Massachusetts. Only half the Mayflower passengers, about 50, survived the first winter in Plymouth — while at least 90 Wampanoags attended the feast, according to Pilgrim Edward Winslow, who offered the only contemporary account of the first Thanksgiving.
(Courtesy of Kathy Tarantola/Plimoth Patuxet Museums)

Hajj said he has plenty to be thankful for every year, including the opportunity to call himself an American.

Hajj was born in Beirut in 1970 and was a small boy when the Lebanese Civil War exploded outside his family home in the heart of the city in 1975. His family often hid in the elevator shaft of their apartment building for safety as missiles rained down.

They fled for the safety of the United States and arrived in Massachusetts, the state that gave birth to Thanksgiving, in 1978.

Hajj was a young chef in 1995 when he took over struggling Mike’s City Diner in what was then a down-and-out Boston block.

He helped turn the diner into a landmark that’s now celebrated across the country for America’s signature holiday dish, while his investment in a downtrodden neighborhood helped turn the South End into one of Boston’s trendiest zip codes today.

Late Boston Mayor Tom Menino rewarded Hajj for his investment in the neighborhood by showing up with a very special guest: President Bill Clinton.

The visit by the then-sitting president of the United States helped put Mike’s City Diner, and its signature turkey dishes, on the national food map.

“How cool is that?” Hajj writes in his “Beirut to Boston” cookbook.

“This immigrant kid from Lebanon made his name in America mastering the most iconic American meal: Thanksgiving dinner. It makes me very proud.”