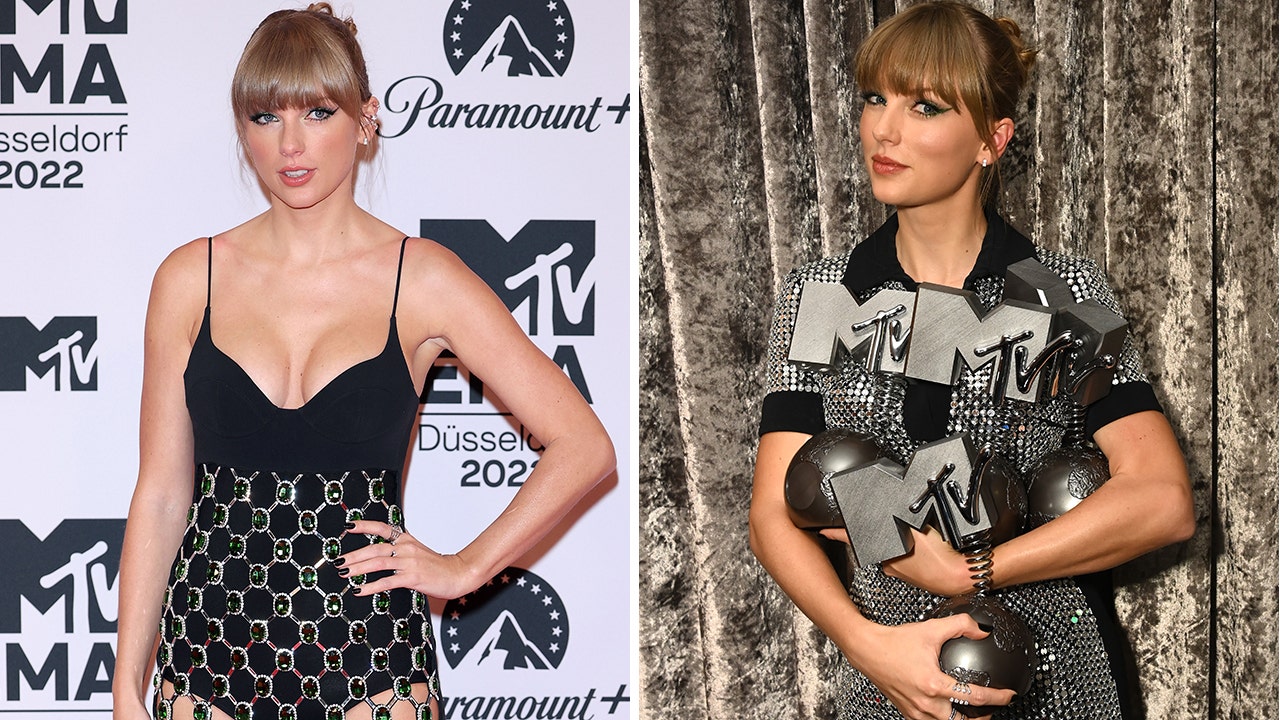 Taylor Swift made the whole room shimmer while wearing a bejeweled ensemble as she walked the MTV Europe Music Awards red carpet for the first time in more than a decade on Sunday.

The 32-year-old singer rocked a stunning David Koma dress, which featured a black bodysuit underneath a sheer, emerald overlay skirt for the show in Dusseldorf, Germany.

Swift was a standout before the ceremony even began, and was crowned the big winner after picking up four trophies, including the best video for her 10-minute anthem, “All Too Well: The Short Film.”

Swift’s emerald-studded skirt was complete with a silver zipper down the back, and she added inches to her statuesque frame with a pair of peep-toe pumps.

TAYLOR SWIFT REVEALS WHY SHE LOVES TO WRITE ABOUT SHAME, SELF-LOATHING: ‘SUCK THE POISON OUT OF A SNAKE BITE’

The “Anti-Hero” singer wore her dusty blonde hair swept up into a chic bun with her classic, wispy fringe framing her face. Swift added a touch of glittering shadow to highlight her cat-eye winged liner, and wore a shade of peach lipstick.

Her red carpet fashion appeared to pay homage to “Bejeweled,” a song from her latest record-breaking album, “Midnights.”

“Best believe I’m still bejeweled. When I walk in the room, I can still make the whole place shimmer,” she sings in the whimsical chorus.

The “Maroon” songwriter made a complete outfit change into a sparkling silver slip-dress later on in the ceremony at the PSD Bank Dome.

“I can’t believe I get to do this as a job,” she told the crowd after accepting the best artist award. She also earned trophies for best pop, best longform and best video.

Harry Styles, Nicki Minaj and BTS were just a few of the many winners at the annual show.

Last week, Taylor revealed she’s going back on tour in 2023, with opening artists including Haim, Paramore and Phoebe Bridgers.

Taylor Swift shows off her awards from the MTV EMAs on Sunday in Germany.
(Kevin Mazur)

“I’m enchanted to announce my next tour: Taylor Swift | The Eras Tour, a journey through the musical eras of my career (past & present!) The first leg of the tour will be in stadiums across the US, with international dates to be announced as soon as we can!”

“Midnights” is another hit for Swift after 10 songs from the album topped Billboard’s Hot 100 in one week. She’s the first artist to accomplish the incredible triumph.