Tailgating ideas: 4 delicious, big-batch breakfast recipes for everyone to enjoy 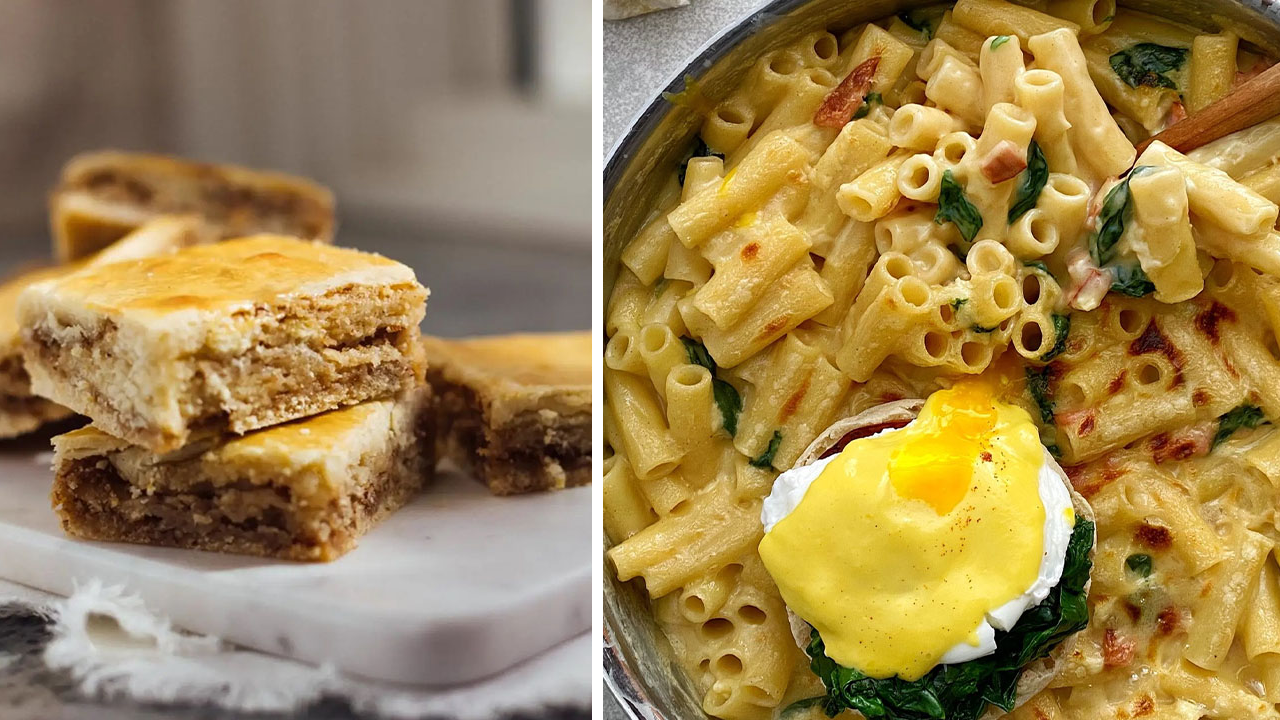 Tailgating season has arrived and so has your hungry entourage.

Kicking back at a football game this fall wouldn’t be complete without great food and drink, especially homemade breakfast ahead of early games.

MOVE OVER, CHARCUTERIE BOARDS – BUTTER BOARDS ARE THE NEXT BIG THING

Next time you’re looking to please a crowd of football fanatics, try out these four to-die-for big-batch breakfast recipes.

They’re easy to make and full of healthy ingredients.

1 lb pasta, shape of your choice

1 lb mild cheese, such as low-moisture semi-skim mozzarella, double creme cheese (like brie, or a triple creme like St Andre) or goat cheese, grated or broken up into small pieces

Peel the garlic cloves. Smash them, then add three to a large sauté pan. Set aside the fourth.

Peel the shallot and cut in half longways. Add cut-side down to the sauté pan.

Zest the lemon, reserving 1 teaspoon of zest, then juice the lemon for the hollandaise.

Add the last smashed garlic clove and cook until fragrant, just about a minute, then toss in the spinach to wilt.

Stir to coat the spinach in olive oil as it cooks down, then once it’s wilted, season with the teaspoon of salt. Transfer to a bowl and discard the garlic clove.

Pour the milk into the sauté pan with the garlic and shallot, and stir in the lemon zest, remaining tablespoon of salt, paprika and ground pepper.

Place over the lowest heat possible for 10 minutes to infuse the flavors. Do not allow the milk to steam or scald.

When making the hollandaise sauce, melt the butter in a small pot and skim off as much of the milk solids as you can, according to Casey Corn.
(Christine Pittman)

Bring a pot of heavily salted water to a boil. Cook pasta to al dente, according to package instructions, then drain. Fill the pot with water again, and bring to a simmer, then turn the heat off.

Make the hollandaise: Melt the butter in a small pot and skim off as much of the milk solids as you can.

In a blender, combine the egg yolks, salt and lemon juice, and blend until combined. Remove the plug from the lid, and with the blender running, drizzle in the melted butter slowly. Try not to add in any white milk solids left in the pot.

Once the sauce has come together, place the blender in the pot of warm water until ready to use.

Preheat a high broiler. Use a slotted spoon to remove the shallot and garlic from the infused milk. Raise the heat to medium, then add in the butter, allowing it to melt slightly before whisking in the flour.

Continue to whisk until the sauce is thick and smooth, about 7-10 minutes.

Roughly chop the spinach and Canadian bacon, then fold into the sauce, along with the pasta. Turn off the heat, then fold in the cheese (if using a grated cheese, save about 1⁄2 cup for the top), followed by the hollandaise. Transfer to a larger baking dish if needed.

Sprinkle the cheese over the top, then place under the broiler for just a minute or so until the cheese is golden and bubbling. If not using grated cheese, serve as is.

BREAKFAST FOOD QUIZ! TEST YOUR KNOWLEDGE OF THESE POPULAR AND DELICIOUS DISHES

In a large bowl, stir together the water, yeast, and 1 tablespoon sugar. Let stand until foamy, 3 to 4 minutes.

Add the remaining sugar, milk, butter, eggs, and salt and stir with a wooden spoon until well blended.

Add the flour and stir until the dough comes together. Rub softened butter on top of the dough and around the bowl. Cover and let stand in a warm spot for 1 hour.

To make the filling: In a food processor, combine the pecans, butter, brown sugar and cinnamon and process until the mixture is well blended and paste-like (do this in two batches if necessary).

Cinnamon is shown poured on a countertop while baking.
(iStock)

Position a rack in the middle of the oven and preheat the oven to 350°F.

Generously dust a work surface with flour. Punch down the dough and place it on the work surface. Roll it out into a 16 x 24-inch rectangle.

Spoon two-thirds of the filling mixture over the dough. Spread it to cover the dough to the edges. Starting on a short side, fold the sheet of dough in half, pressing the two short sides together to make sure they stick together and to flatten it slightly (you’ll have a roughly 14 x 16-inch rectangle).

Use your hands to flatten the rectangle and “smoosh” it into an approximately 12 x 18-inch rectangle.

Use a chef’s knife to cut the dough into 24 roughly 3-inch squares. Arrange the squares on the prepared pan so that they are touching. Brush the tops of the squares with beaten egg.

In a large skillet, cook the bacon over medium-low heat until crispy, 8 to 10 minutes.

Transfer the bacon to a plate lined with paper towels and set aside. When cool enough to handle, chop into roughly 1/4-inch pieces.

Pour off all but 2 tablespoons of the bacon grease from the pan. Set the skillet over medium-high heat, add the onion, and sauté until soft and lightly browned, about 4 minutes.

Add the kale and garlic and sauté until the garlic is tender and fragrant, another 3 minutes. Remove from the heat.

A closeup of bright green kale in a basket. For the recipe described here, you’ll stir the kale mixture into the eggs, then pour into the buttered dish.
(iStock)

Add the chopped bacon to the onion/kale mixture.

In a large bowl, whisk together the eggs, milk, and mustard. Add 1/2 cup of the mozzarella, 1/2 cup of the Gruyère, the hash browns, salt, and pepper. Mix well.

Stir the kale mixture into the eggs, then pour into the buttered dish.

Top evenly with the remaining mozzarella and Gruyère. Cover with foil.

Transfer to the oven and bake for 45 minutes.

Remove the foil and bake, uncovered, for 15 minutes, until the top is lightly browned and bubbly. Serve hot.

In a large bowl, mix the agave, lime juice and orange juice.

Add the strawberries, blueberries, and raspberries.

Angelica Stabile is a lifestyle writer for Fox News Digital.