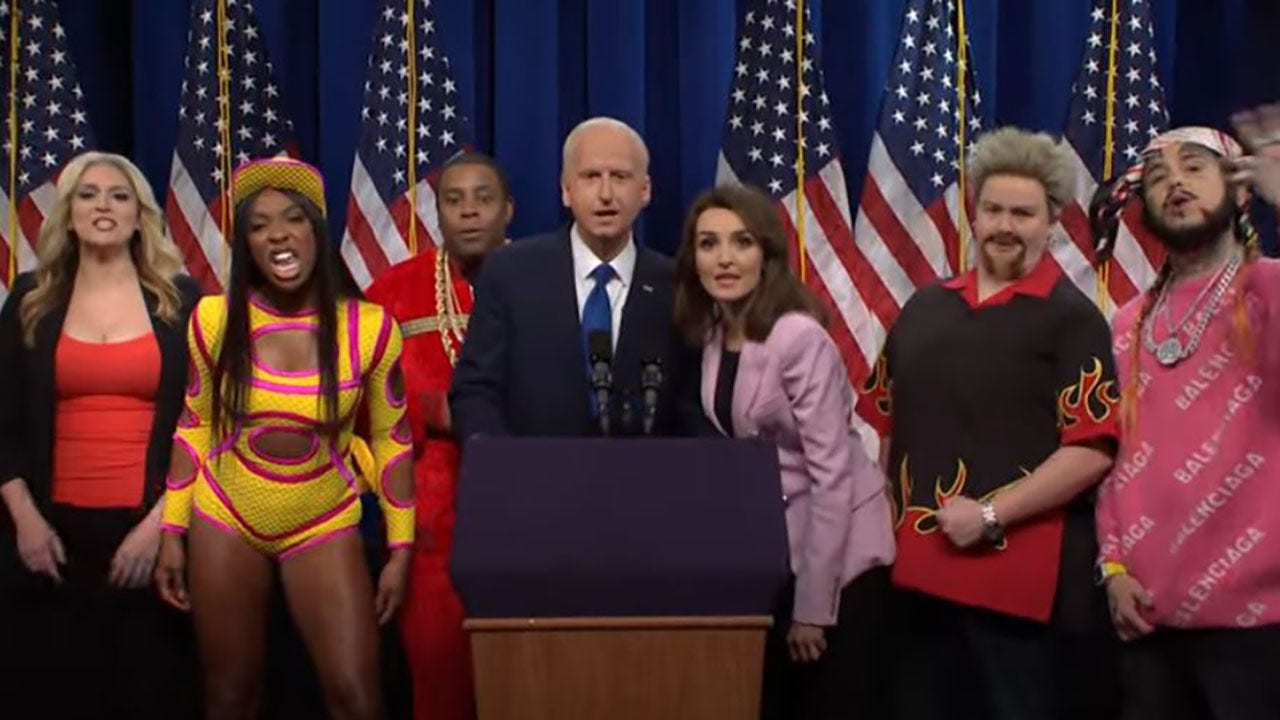 “Saturday Night Live”’s cold open this weekend had President Biden (Andrew Dismukes) concerned about the “big yikes” midterms on Tuesday and wondering if the liberals should spice up their candidate lineup.

“This Tuesday, the midterm elections will determine the fate of our democracy and let’s just say: big yikes!” Dismukes, while standing behind a presidential podium, emphasized as the commander-in-chief at the top of the show.

“Folks, I’m trying like hell, I promise. I’m on the Peloton every morning tempting fate,” Dismukes said as Biden.

The fake president admitted he’s “boring” and said the problem for Democrats this election cycle is that they don’t have “any stars anymore.”

“Too many Raphael Warnocks and not enough Herschel Walkers, which is why we’re going to make some last-minute changes with some Democrats who are exciting!” he exclaimed.

Williamson said as a “level-four enchantress” she’s “ready to fight for the American dream” as she hit a Tibetan singing bowl.

Biden called her “America’s next ‘defense against the dark arts teacher,’ folks.”

BIDEN PREDICTS DEMOCRATS WILL TAKE SENATE, HAVE CHANCE TO KEEP THE HOUSE IN MIDTERMS

“I want no cap on social security, no cap!” the distinctive rapper said forcefully while waving his arms around. “Democrats, baby!”

Biden called him a “terrifying young man” after the rapper left the stage before introducing former adult film star Stormy Daniels (Cecily Strong) as the “next governor of Michigan.”

Chef and television personality Guy Fieri and his son Ryder Fieri (L) attend a game between the Philadelphia Eagles and the Las Vegas Raiders at Allegiant Stadium on October 24, 2021 in Las Vegas, Nevada. The Raiders defeated the Eagles 33-22.
(Ethan Miller/Getty Images)

“Hi, TV,” Strong as Daniels slurred slightly. “I may be a former adult star currently on season seven of the ‘Surreal Life’ but I am willing to debase myself and enter U.S. politics.”

“I’m a witch, b—h!” she shouted, holding her hands up like claws while Biden looked on scared as she walked off.

Finally, he introduced actor Tracy Morgan (Kenan Thompson) as the new person in charge of the student loan handout after saying people “got mad” at him over the policy.

In the “SNL” alum’s laid-back style, Thompson said if “y’all want that money” people would have to “come over here and rub my belly.”

Bringing back the motley crew, who all answered Biden’s “What do we want?” question (Morgan wanted sugar-free White Castle) and the “When do we want it?” questions differently (Williamson suggested a parallel timeline), the president decided half-heartedly, “We’re going to be fine.”

Comedian Amy Schumer guest-hosted the show and Steve Lacy was the musical guest.