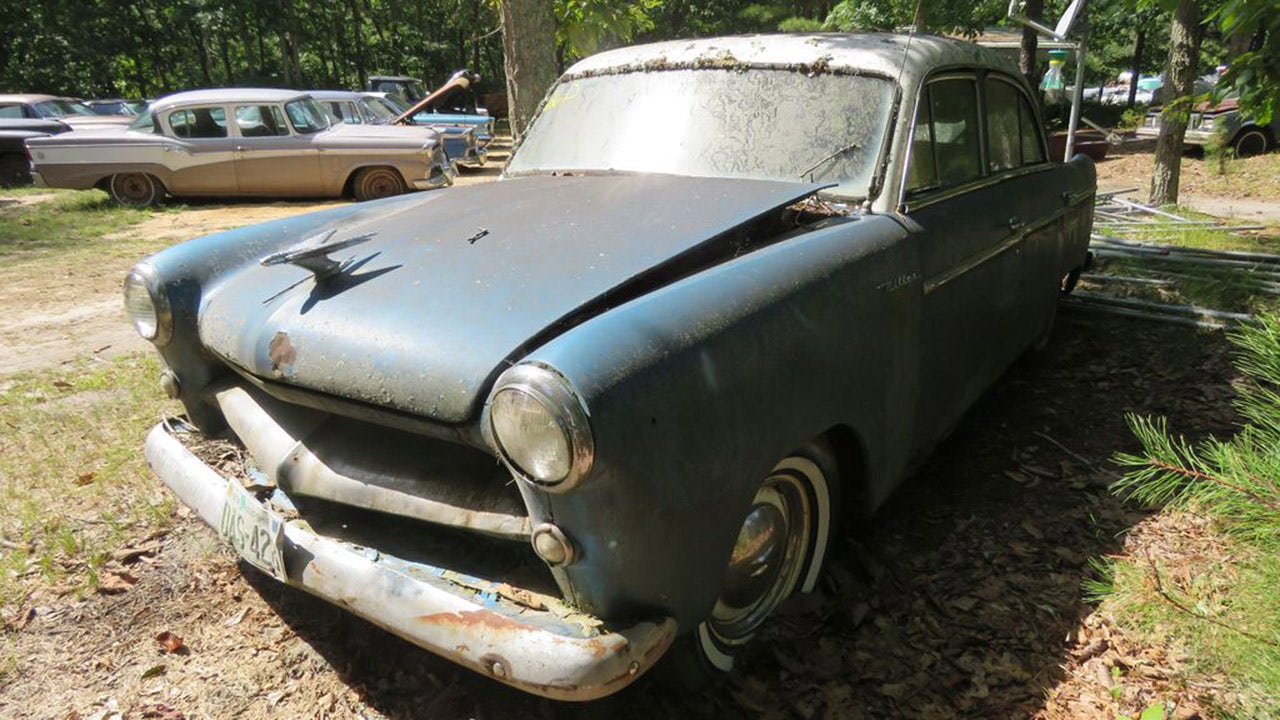 Mr. Bob made a good living in the business of johns.

Drayton’s father started a septic system company in 1955 and added the toilet and roll-off trash container rentals over the years. Bob III is in charge today.

But while Bob Jr. worked in the disposal industry, his passion was bringing things back to life — classic American cars.

PARTY’S OVER: FORD FIESTA TO BE DISCONTINUED AFTER 47 YEARS

Drayton put together a collection of more than 70 cars stashed in various garages, sheds and the woods near his home in the Pine Barrens.

“He worked on them himself and had a couple of employees that helped him out,” Drayton’s son told Fox News Digital.

Drayton stored the collection in a group of garages and sheds and in the woods near his home.
(VanDerBrink Auctions)

“One fella, his lifelong friend, knew how to get them running.”

He didn’t get around to fixing all of them, but most the cars are now being sold online in various states of condition through VanDerBrink Auctions until Nov. 6.

Drayton said his father had a thing for 1950s and 1960s Chevrolets, and there are plenty of them on offer.

But many brands are represented, including several discontinued ones such as Crosley, Nash and Studebaker.

A 1954 Willys Lark DeLuxe is from the same company that launched Jeep.
(VanDerBrink Auctions)

There are three cars from Willys, the company more famous for spawning Jeep, including a working 1954 Lark DeLuxe with only 28,799 miles on the odometer that Drayton stored inside and remains in excellent shape.

“Dad kept the running ones inside and the ones that needed work outside,” Drayton said.

Drayton’s 1966 Pontiac GTO was restored some years ago but remains in good condition.
(VanDerBrink Auctions)

One of the hottest tickets on the docket is a restored and lightly modified first-generation 1966 Pontiac GTO.

It’s considered by many to be the car that really kicked off the muscle car era.

Drayton built several racing cars, including this 1979 Chevrolet Malibu that has a V-8 engine from a dirt track racer.
(VanDerBrink Auctions)

Drayton built a few drag racing cars in his day, too, and there’s a 1979 Chevrolet Malibu with the 350 cubic-inch V-8 engine from a dirt track race car and a 1960s T-Bucket that needs an engine.

This T-Bucket roadster is ready to have an engine installed.
(VanDerBrink Auctions)

“Dad started racing with a friend named George Adams, who gave him his first job at his gas station,” Drayton said.

“He wanted to quit school, and my grandfather told him he could, but only if he went out and found a job on his own.”

Another gem is a street-legal maroon 1964 Dodge Polara.

It’s built for drag racing with a fuel cell, hood scoop and V-8 engine equipped with a nitrous oxide injection system to boost its power.

Drayton III, whose son Bob carries the family name into a fourth generation, is a bit of a car nut himself.

He fixed up a vintage Chevrolet Camaro for his wife and said he’s hanging onto about a dozen of his dad’s cars, including a ’57 Chevy Bel Air with the classic dual quad-barrel carburetted 283 cubic-inch V-8.

“Dad liked just about everything, whatever he was into at the time.”