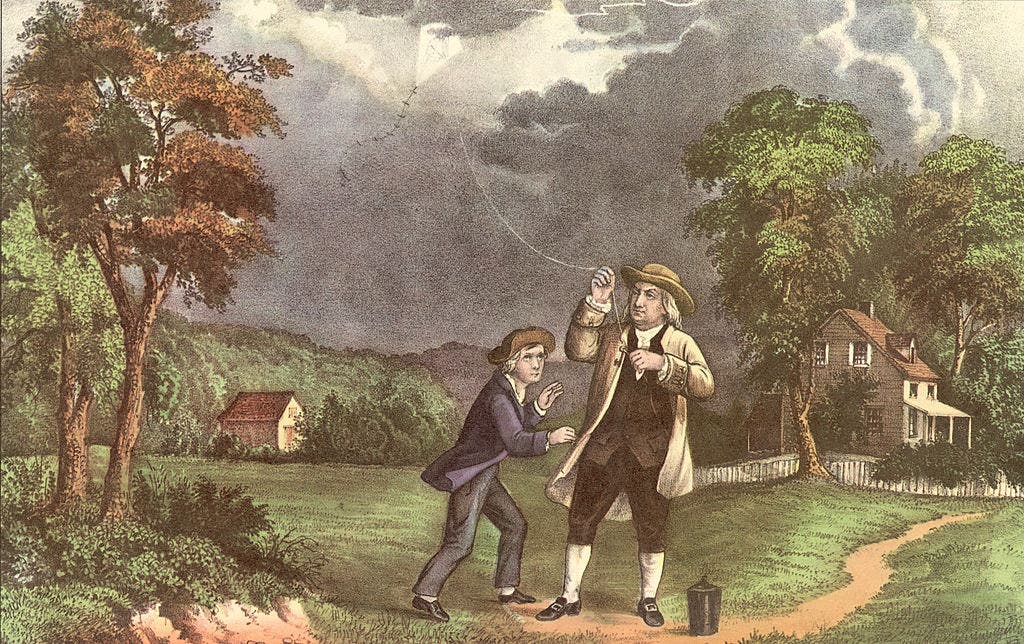 American patriot and longtime man about London town Ben Franklin was named the leader of the colonial rebellion by the British press on this day in history, Nov. 14, 1776.

“The very identical Dr. Franklyn, whom Lord Chatham so much caressed, and used to say he was proud in calling his friend, is now at the head of the rebellion in North America,” reported the St. James Chronicle of London.

“Lord Chatham” was a reference to William Pitt, who served as prime minister of Great Britain from 1766 to 1768 and who was known for his sympathetic view of the American cause.

ON THIS DAY IN HISTORY, NOV. 11, 1921, TOMB OF UNKNOWN SOLDIER DEDICATED AT ARLINGTON NATIONAL CEMETERY

First, and most obviously, Franklin was old enough to be the father, and even grandfather, of many of the shockingly young Founding Fathers.

Born on January 17, 1706, in Boston, Franklin was 70 years old when he signed the Declaration of Independence.

Thomas Lynch Jr. and Edward Rutledge, both of South Carolina, were each only 26 years old and the youngest signatories.

WORLD WAR II VETERAN GLADYS HUGHES, 99, HAS A PATRIOTIC MESSAGE FOR THE NATION

The future Father of His Country, Gen. George Washington, was only 44.

Second, the other Founding Fathers achieved their fame in the fight for American independence. Franklin already enjoyed celebrity as an author, statesman and scientist on both sides of the Atlantic.

A Currier and Ives lithograph of Benjamin Franklin and his son William using a kite and key during a storm to prove that lightning was electricity, June 1752. Franklin achieved fame in the London scientific community for his research on electricity.
(Photo by Hulton Archive/Getty Images)

His research on electricity “won him the 1753 Copley Medal (the 18th-century equivalent of the Nobel Prize) and a fellowship of the Royal Society,” Smithsonian Magazine wrote in 2016 of Franklin’s life in London.

“Ben Franklin was embraced by a British aristocracy enthralled by science.”

“It also transformed his social standing. He was famous. This son of a poor tallow chandler was embraced by a British aristocracy enthralled by science and particularly keen on the sizzle of electricity.”

Third, Franklin had spent much of his life living in London, moving there for the first time as a teenager in 1724 before returning to Philadelphia in 1726.

ON THIS DAY IN HISTORY, JULY 26, 1775, US POST SYSTEM ESTABLISHED UNDER BEN FRANKLIN

He was known to enjoy the pleasures of English high society and relationships with Britain’s leading citizens.

Illustration of American statesman and scientist Benjamin Franklin (1706-1790) as he reads at a table, late 18th century.
(Photo by Stock Montage/Getty Images)

Franklin appeared to draw closer to his native soil as Parliament issued increasingly punitive laws against the colonies.

London society, meanwhile, increased its verbal attacks against both him and his countrymen.

He raced to the defense of the colonies nearly two decades before the revolution in a letter to the same St. James Chronicle following a scathing anti-American screed penned by a British officer.

“Spots of dirt thrown upon my character,” said Ben Franklin, responding to attacks in Parliament.

“There are several strokes in (the officer’s article) that render the colonies despicable, and even odious to the mother country, which may have ill consequences,” Franklin wrote ominously on May 9, 1759.

He brought American grievances before Parliament in 1774, for which he was personally savaged by British solicitor-general Alexander Wedderburn.

“Spots of dirt thrown upon my character,” the incensed Franklin wrote of the verbal abuse.

Increasingly an outcast, he left Britain for Philadelphia for the last time on March 20, 1775, just four weeks before the transatlantic disagreement exploded into warfare at the Battles of Lexington and Concord.

Franklin’s break with his beloved London was complete when he pledged his life, fortune and honor to the cause of American independence on July 4, 1776.

This Georgian terraced house at 36 Craven Street, near Trafalgar Square, was the “genteel lodgings” of American statesman Benjamin Franklin (1706-1790) from 1757 until 1775. It is the only one of Franklin’s homes anywhere in the world still standing.
(Photo by SSPL/Getty Images)

Said Franklin to his fellow American revolutionaries upon signing the Declaration of Independence: “Gentlemen, we must now all hang together, or we shall most assuredly all hang separately.”

London has since re-embraced the legacy of the scientist-turned-rebel.

The Benjamin Franklin House at 36 Craven St. in London, where he lived for nearly 20 years before the American Revolution, opened as a museum in the heart of the city in 2006. It is the “world’s only remaining home of Benjamin Franklin,” says the museum’s website.