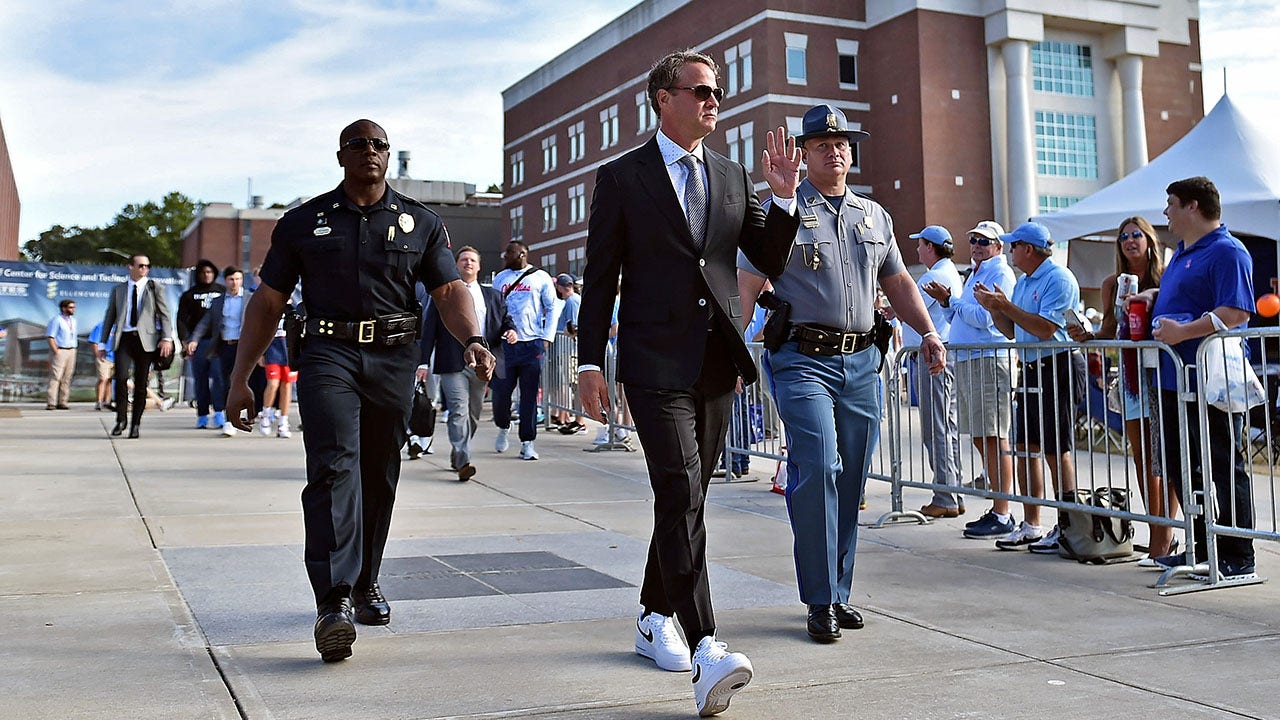 Ole Miss head coach Lane Kiffin may have bolted the University of Tennessee in 2009 after just one season, but it appears that he still has some fond memories of Knoxville.

The Rebels, sitting at 6-0 and No. 9 in the country to start their season, are playing their own game against a school from Alabama on Saturday.

Ole Miss is taking on 3-3 Auburn at Vaught-Hemingway Stadium in Oxford, Mississippi, but Kiffin’s old team is not far from his mind.

“If you think I don’t know that Tennessee is playing Alabama, I mean, who doesn’t know that,” Kiffin said Saturday morning on “College Gameday.”

“I don’t know what to say except for, ‘Hey, let’s go beat the state of Alabama today. Go Vols.’”

Kiffin is well aware of the rivalry between the two schools, having lost in heartbreaking fashion in 2009.

Tennessee nearly beat Saban for the first time with Kiffin as head coach, but the Vols had a 44-yard field goal attempt blocked as time expired, and Alabama escaped with a 12-10 win.

Tennessee has not managed to get closer than Kiffin did in recent years and has lost by at least 22 points in the last six matchups.

Since Saban joined Alabama in 2007, the Crimson Tide are 15-0 against Tennessee, a losing streak that the Volunteers hope to snap on Saturday.

Tennessee head Josh Heupel has the Vols rolling in his second season at the helm, leading Tennessee to its best start since the 2016 season.

It’s the offense that has led the charge for the Volunteers, as quarterback Hendon Hooker has emerged as a Heisman Trophy candidate.

Hendon Hooker #5 of the Tennessee Volunteers looks to throw against the Florida Gators at Neyland Stadium on September 24, 2022, in Knoxville, Tennessee. Tennessee won the game 38-33.
(Donald Page/Getty Images)

Much will depend on the health of Alabama quarterback Bryce Young who missed last week’s game against Texas A&M with a shoulder injury.

While Young’s involvement has remained a game-time decision, ESPN reported Saturday morning that the reigning Heisman trophy winner is expected to start.

ALABAMA’S BRYCE YOUNG APPEARS TO BE ON TRACK TO START VS TENNESSEE: REPORT

“Bryce has practiced some this week,” Saban said Thursday. “And I think it comes down to, ‘Does he feel, and do we feel, that he can throw the ball effectively enough?’ He’s not going to hurt himself by doing it. I just don’t know how much it will hurt him if he does it.

Head coach Lane Kiffin of the Mississippi Rebels arrives before the game against the Auburn Tigers at Vaught-Hemingway Stadium on October 15, 2022, in Oxford, Mississippi.
(Justin Ford/Getty Images)

“He’s done it on a limited basis. So, that’s the question, and nobody is going to know that until Saturday comes. He won’t know, I won’t know, nobody will know it. I know he wants to play, and I know he thinks he can play, and we’ll see.”