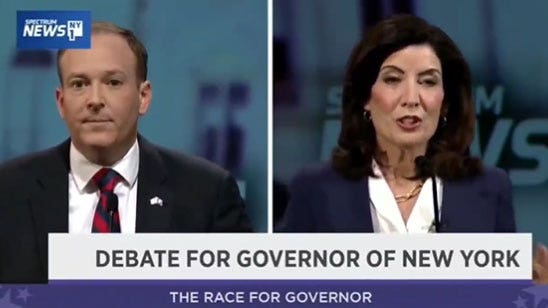 New York Gov. Kathy Hochul on Monday said her Republican opponent is overplaying the state’s crime issue and is “trying to scare people for fun.”

Hochul made the remark about U.S. Rep. Lee Zeldin, her Republican opponent, during a campaign stop in Manhattan.

“And New Yorkers are on to it,” she said, according to the Washington Times. “All the legitimate media organizations have called him out for what he is doing — fear-mongering,” she said. “That’s not just here in New York. That has been the Republican playbook all across this country.”

Fox News Digital has reached out to Zeldin.

A Times reporter then asked the Democratic governor why she has taken a “mocking tone” with New Yorkers experiencing fears of crime in the city, Hochul replied that it was “an absurd assessment.”

“We have been in the subway,” she said. “I stood there with Mayor (Eric) Adams just a few days ago, talking about an intelligent plan, not just to scare people to say that’s over here. And you can scare people, but I’m working on a real solution,” referring to her announcement with Mr. Adams in late October known as the “Cops, Cameras, Care” initiative.

Zeldin has repeatedly hammered Hochul over crime across the state throughout his campaign. On Friday, he urged voters to go to the ballot box “like your life depends on it, because it does.”

He tweeted the remarks with an image of a New York Post front page showing a man accused of raping a jogger who also has a lengthy criminal history. On Monday, he said, if elected, he would repeal cashless bail and other “pro-criminal laws.”

“I am going to continue to focus on everything that we can possibly do to make out streets and subways safer and I do it without apology or regret,” he said on Spectrum News NY1.

Lee Zeldin and New York Gov. Kathy Hochul at a debate. Zeldin has made New York state’s crime rate a key part of his campaign against Hochul.
(Screenshot/Spectrum News)

Last week, Hochul acknowledged there was a crime problem but also said Zeldin’s stance is counterproductive.

“He thinks it’s all right for 18-year-olds to buy an AR-15,” she said, adding she changed that law following the Buffalo massacre. “He thinks it’s OK to not have background checks. He opposes what we call the ‘red flag’ laws.