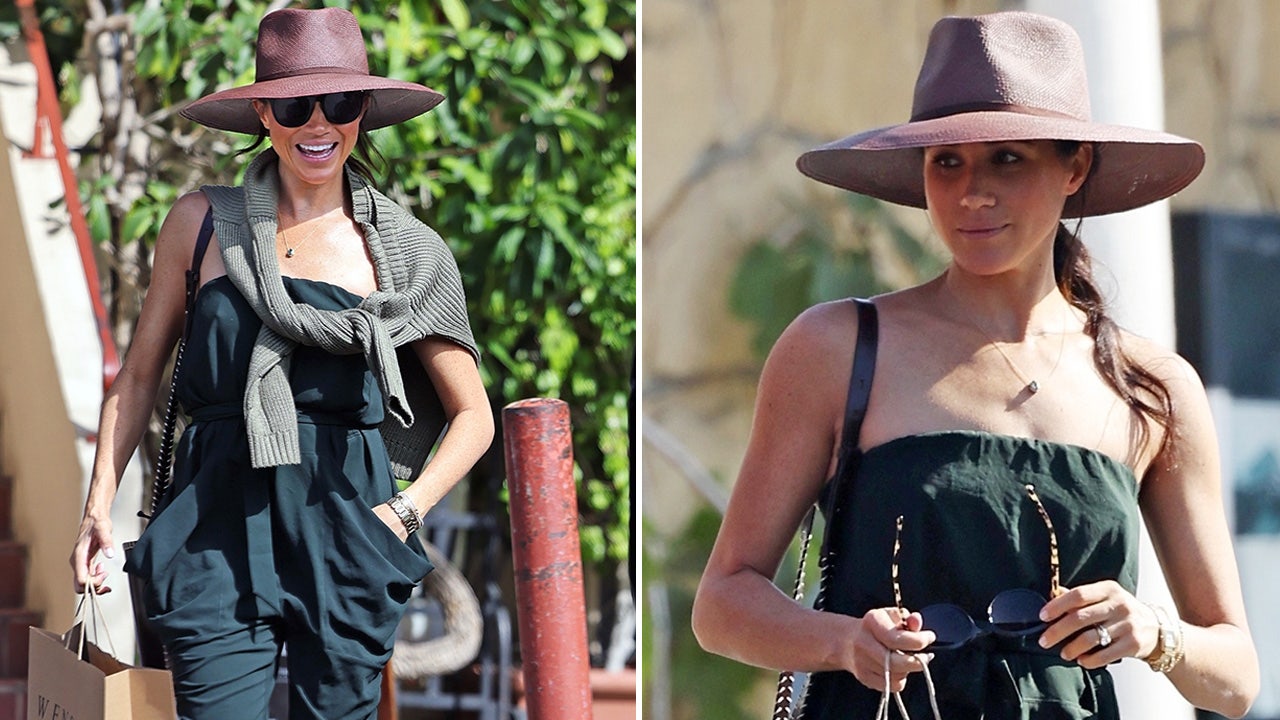 Meghan Markle stepped out in the affluent Montecito area Friday afternoon following controversial remarks made on her podcast where she claimed to feeling “objectified” while working as a briefcase girl on the popular “Deal or No Deal” game show more than 15 years ago.

The Duchess of Sussex wore a strapless olive green jumpsuit with sandals, and tied back her long, dark brown hair into a loose braid while shielding her face from the sun with a massive hat as she made her way into a few stores with a friend.

Markle, 41, recently sparked backlash after a discussion on her “Archetypes” podcast with Paris Hilton where she admitted to having a difficult time working a job based on her looks when she had previously spent years studying international relations.

Meghan Markle was spotted shopping near her home in Montecito, Calif. on Friday after claiming she felt “objectified” working on “Deal or No Deal” in 2006.
(BACKGRID)

“I was thankful for the job, but not for how it made me feel. Which was … not smart. And by the way – I was surrounded by smart women on that stage with me,” Markle said. “But that wasn’t the focus of why we were there. And I would end up leaving with this pit in my stomach, knowing that I was so much more than what was being objectified on the stage.”

Paris Hilton completely empathized with the typecasting producers placed on anyone in front of a camera, as she was known as a “dumb blonde” from “The Simple Life” with Nicole Richie.

Meghan Markle went shopping in Montecito after inciting controversy over claims she was “objectified” while working on “Deal or No Deal.”
(BACKGRID)

Hilton added, “Like, I look at it now, and I’m like, I think it’s so much cooler to be smart and intelligent, but back then, it was almost like they wanted … girls to be like that in some way.”

“Yeah it was glorified,” Markle responded. “And it’s not specific to here, and it’s not even specific to that decade. This is something that happens globally. This idea of dumbing women down and women dumbing themselves down.”

Markle’s words faced criticism from every angle, including backlash former models on the show which was hosted by Howie Mandel. “The View” co-host Whoopi Goldberg said, “That’s TV, baby. But what did you think you were going to? You know that’s what the show was.”

The long-running guessing game, where contestants could eliminate briefcases valued at .01 to $1 million, and make deals with “The Banker” for a grand prize, first aired in 2005 and officially wrapped in 2019.

Meghan Markle discussed some of her past history as an actress while chatting with Paris Hilton on her latest podcast episode.
(BACKGRID)

Meghan Markle smiles while walking to a valet stand after spending the afternoon with a friend.
(BACKGRID)

“Everyone on the show knew their role, knew the image, auditioned, volunteered and accepted the job. I do not share her experience at all. I never felt objectified,” former “Deal or No Deal” model Patricia Kara told Fox News Digital.

Markle also revealed there were different beauty stations backstage to prepare for the game show – including a section where you can add “padding in your bra.”

“There is no truth to the padding station. In all the years I worked on the show, that never existed,” Kara disputed to Fox News Digital.

“Instead of ever feeling like a bimbo, I knew … working alongside such wonderful people like Howie Mandel would only lead to bigger and better things for me,” Donna Feldman told Fox News Digital.

Meghan Markle poses for a portrait shot during season two promotions for “Deal or No Deal.”
(Paul Drinkwater/NBC/NBCU Photo Bank)

Meghan Markle brought a friend along for a shopping excursion after admitting her “Deal or No Deal” past felt uncomfortable.
(BACKGRID)

Feldman noted that it wasn’t just her “looks” that had landed her the job, but also her “positive nature,” personality and “overall work ethic.”

“Of course, there are certain aspects, like having to stand in high heels for many hours … but that was part of the job that I signed up for… However, it’s important to note that everyone has their own experience, and I can only speak from mine,” Feldman added.