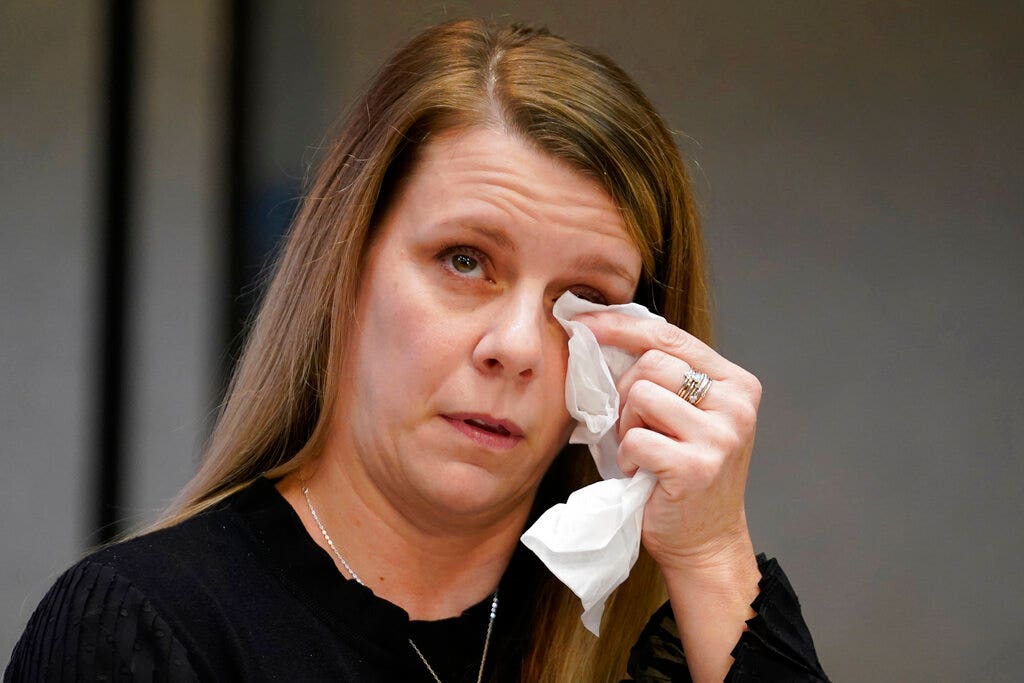 Gabby Petito’s parents were preparing to shell out thousands to fly her home from Moab, Utah, after former fiancé Brian Laundrie was seen hitting her in public, court filings revealed Thursday, but they held off after learning that police were involved in the case.

Lawyers for the slain travel blogger’s parents formally filed a lawsuit against the Moab Police Department Thursday, alleging that its officers’ negligence “caused Gabby’s tragic and untimely death” and seeking more than $50 million in damages.

A bystander in Moab, Utah, called 911 to report seeing Petito hit and slapped by former fiancé Brian Laundrie in broad daylight on Aug. 12, 2021 – roughly two weeks before he would strangle her in the Wyoming wilderness.

Police stopped the couple, made no arrests and split them up for the night.

Gabby Petito’s mother, Nichole Schmidt, wipes a tear from her face during a news conference Thursday, Nov. 3, 2022, in Salt Lake City. Gabby Petito’s family filed a wrongful death lawsuit alleging that police failed to recognize their daughter was in a life-threatening situation last year when officers investigated a fight between her and her boyfriend. The fight happened weeks before authorities say the boyfriend killed her while the couple were on a cross-country van trip.
(AP Photo/Rick Bowmer)

Petito called her parents, who “immediately responded by beginning to arrange for Gabby to fly home and to have her van shipped home to separate her from Brian,” the 35-page complaint reveals.

“We didn’t know that Brian was who he was,” an emotional Nichole Schmidt told reporters Thursday. “We just didn’t know. There was no indication of that.”

But when police got involved, they helf off on their plan to fly Petito home, “believing that the situation was being appropriately handled and evaluated by competent authorities.”

Joseph Petito, father of Gabby Petito, holds his head during a news conference Thursday, Nov. 3, 2022, in Salt Lake City. Gabby Petito’s family filed a wrongful death lawsuit alleging that police failed to recognize that their daughter was in a life-threatening situation last year when officers investigated a fight between her and her boyfriend. The fight happened weeks before authorities say the boyfriend killed her while the couple were on a cross-country van trip.
(AP Photo/Rick Bowmer)

Petito’s parents and stepparents, Joseph and Tara Petito, Nichole and Jim Schmidt, were in Salt Lake City in person for the announcement.

“She could’ve been protected that day,” Schmidt said, adding that it is the family’s goal to protect other daughters and domestic violence victims from the same fate.

More than a year later, after an outside investigation found flaws in the officers’ response, the family are alleging that “the officers egregiously misinterpreted Gabby’s extreme emotional distress, seeing it as the cause of the domestic violence rather than its result.”

“Despite the witness’s report, the officers treated Brian as if he were the victim of domestic abuse rather than the perpetrator,” the lawsuit reads. “In fact, the officers never directly questioned Brian about whether he hit Gabby or how she ended up with scratches on her face.

“The purpose of this lawsuit is to honor Gabby’s legacy by demanding accountability and working for change in the system to protect victims of domestic abuse and violence and to prevent such tragedies in the future,” Jim McConkie, one of their attorneys at the Parker and McConkie law firm, said during a news briefing in Salt Lake City.

“We prefer not to be here,” Joseph Petito said during the news briefing. “We’d give anything to have her back.”

The court received the official complaint hours after a Moab city spokeswoman released a statement vowing to defend the officers, who were faulted for “unintentional mistakes” earlier this year after an outside investigation.

WATCH GABBY AND BRIAN’S LAST KNOWN APPEARANCE TOGETHER IN PUBLIC:

“The death of Gabrielle Petito in Wyoming is a terrible tragedy, and we feel profound sympathy for the Petito and Schmidt families and the painful loss they have endured,” the statement begins. “At the same time, it is clear that Moab City Police Department officers are not responsible for Gabrielle Petito’s eventual murder.”

Petito’s death came roughly two weeks after the stop, the spokeswoman noted, stating that city police “acted with kindness, respect, and empathy toward Ms. Petito” when they encountered her in the entranceway to Arches National Park last year.

“The attorneys for the Petito family seem to suggest that somehow our officers could see into the future based on this single interaction,” the statement continues. “In truth, on Aug. 12, no one could have predicted the tragedy that would occur weeks later and hundreds of miles away, and the City of Moab will ardently defend against this lawsuit.”

Gabby Petito’s mother Nichole Schmidt, speaks during a news conference as her husband, Jim Schmidt, looks on, Thursday, Nov. 3, 2022, in Salt Lake City. Gabby Petito’s family filed a wrongful death lawsuit alleging that police failed to recognize their daughter was in a life-threatening situation last year when officers investigated a fight between her and her boyfriend. The fight happened weeks before authorities say the boyfriend killed her while the couple were on a cross-country van trip.
(AP Photo/Rick Bowmer)

When asked about the city’s statement Thursday, Brian C. Stewart, another Petito family attorney, said that a multitude of people could have and did predict the tragedy.

“The [Utah] Legislature foresaw this situation and that’s why they wrote the law the way that they did, and Officer Pratt also foresaw that outcome, not that it would happen every time, but that it was a potential outcome … and he said in no uncertain terms that this is why they don’t have discretion to not arrest,” Stewart said. “And nevertheless he chose to find a way to not follow the statute that day.”

And it was Pratt, during the Aug. 12 stop, who referenced Utah’s mandate for arrests or citations during domestic violence stops.

The complaint alleges that one of the officers involved in the stop, Pratt, has been accused of domestic violence himself and was therefore unfit for the job.

His accuser, identified in court documents as Witness 1, told Fox News Digital that he had threatened to kill her with a crowbar after she had cut off their affair and threatened to go public.

“Officer Pratt, in particular, was fundamentally biased in his approach to the investigation, choosing to believe Gabby’s abuser, ignoring evidence that Gabby was the victim and intentionally looking for loopholes to get around the requirements of Utah law and his duty to protect Gabby,” the lawsuit alleges.

Petito’s parents have started a foundation in her name, which donated $100,000 to the National Domestic Violence Hotline earlier this year.

If you or anyone you know is a victim of domestic violence, please call the National Domestic Violence Hotline at 1-800-799-SAFE or text “START” to 88788.