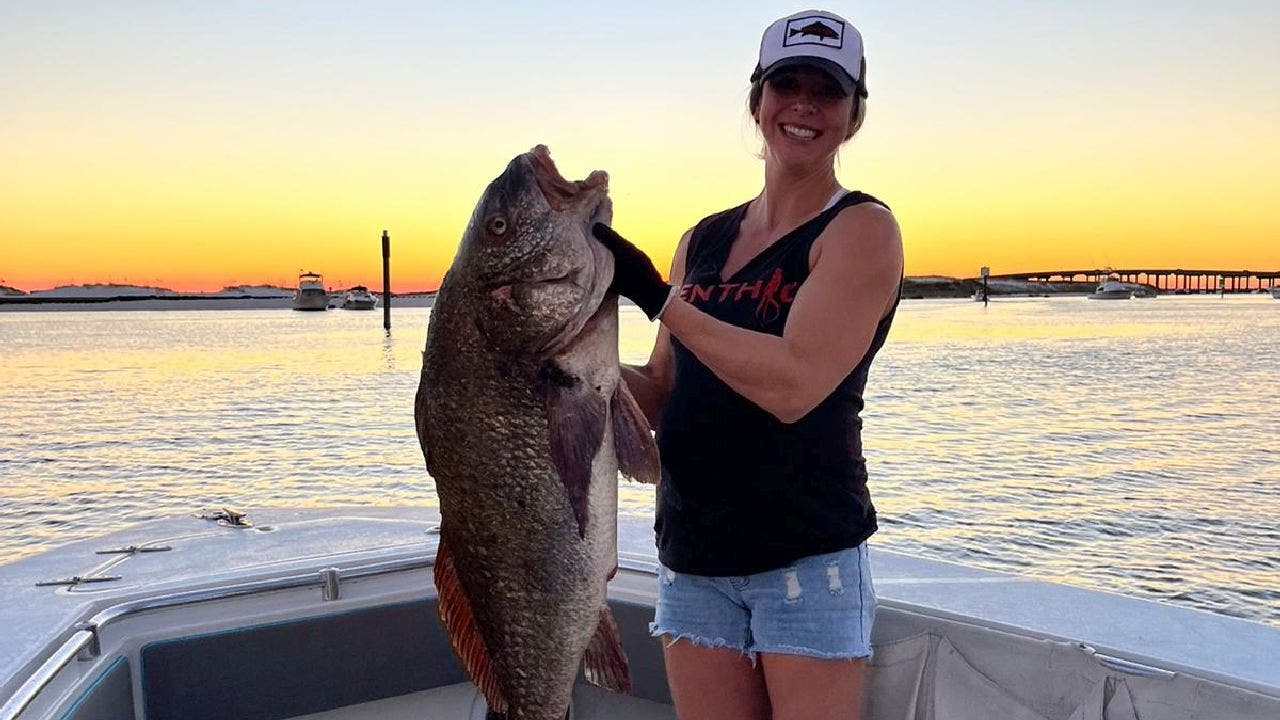 A mother-to-be has inspired women, fishing hobbyists and others after she polespeared a potential world record fish while freediving at eight months pregnant.

“I’ve been approached by several individuals who recognize me,” Augustine told Fox News Digital in a phone interview, “and they will come up and share how inspiring my story has been to them and how it’s motivated them to get off the couch and do something that they wouldn’t have normally done after reading what I was able to do while pregnant.”

“It’s one of the most beautiful, special things to come out of this,” she said.

Augustine, a physician assistant and Air Force veteran, began freediving after she took a free diver safety course in 2020 and earned her certification.

Julie Augustine (right) took her black drum catch to the Destin Fishing Rodeo in Florida for weighing on Oct. 1, 2022. Here, she holds the 37.6-pound fish and her nine-foot polespear while posing with Miss Destin 2022 (left).
(Julie Augustine)

She said she eventually learned about polespear fishing from locals who spoke highly of the sport.

She didn’t have the most outdoorsy background growing up, but Augustine said she was open to polespearing because she was looking for a watersport to help stay active during the COVID-19 pandemic, she said.

During her pregnancy, she cut back on her dives as a precaution against sharks.

“During the warmer months, like in August, it gets quite sharky,” Augustine said. “The bull sharks love to be around where people are fishing.”

She said that the black drum she caught on Oct. 1 was the first time she’d been back in the water since her fifth month of pregnancy.

Augustine said she’s grateful to have learned how to free dive and polespear from experts who stressed the importance of safety, including proper breath hold and control, diving techniques, equipment familiarization and problem-solving.

“I’m just so very fortunate to live in one of the best places in the world, truly, to free dive and spearfish,” Augustine said.

When she goes on polespear fishing trips, Augustine wears a wetsuit, a weight belt, a set of fins, a mask and a snorkel. The equipment she uses includes her polespear, knife and belt reel.

Polespearing is one of the “more primitive” and “not as maneuverable” spearfishing methods, Augustine noted, when compared to spear guns.

Julie Augustine, 40, opted for an underwater maternity shoot with her polespear before she caught her potential world record black drum.
(John Oja with Johnny Ocean Photography)

“[Polespears are] exactly what you imagine [them] to be. You have bands that are released with a trigger pole,” Augustine said.

“On the polespear I use, you basically just have the three components, which is the spear tip, the shaft and then the band on the back,” she continued.

“The way you load it, you reach back, grab the band with one hand, and then you just pull up as far onto the shaft of the spear as you can, and all the ‘connect energy’ is stored within that band within your arm.”

Augustine advises all spearfishers to dive with a buddy or crew who can be on the lookout for sea wildlife or other hazards.

“You have to get a lot closer to what you’re hunting to try to get a good shot,” she added.

Catching fish with a polespear can attract sharks, which is why Augustine advises all spearfishers to dive with a buddy or crew who can be on the lookout for sea wildlife or other hazards.

13 RULES FOR WORKING OUT WHILE PREGNANT

People who can dive 80 and 90 feet on a single breath hold tend to have access to more fish, according to Augustine.

Identifying fish in accordance with local laws and environmental guidelines is another challenge that happens underwater, she noted.

“You just have to be very, very well-versed in the rules,” Augustine said.

Though polespearing may require multitasking, Augustine said she views the sport as a form of self-care.

“One of the best things that you can do in pregnancy is to de-stress and remain calm.”

Augustine said she’s happy she’s been able to maintain a calm environment for her first baby, and she’s listened to her body and obstetrician.

Julie Augustine’s potential world record black drum was caught on Oct. 1, 2022. She was eight months pregnant at the time. “I’m just so very fortunate to live in one of the best places in the world, truly, to free dive and Spearfish,” she told Fox News Digital.
(Julie Augustine)

“I’m very blessed to have this very healthy pregnancy up to this point,” she said — adding that she hopes “it continues as such. I choose not to listen [to] or focus on any negativity.”

She’d be open to polespearing with her son in the future, she said, when he’s old enough and has an interest in the sport, but she’d also support any other activity he wants to pursue.

Augustine said she hopes women who read her story realize they don’t have to give up an opportunity or experience due to age or pregnancy.

The current world record for a black drum caught by a woman via sling or polespear is 36.3 pounds, according to the International Underwater Spearfishing Association’s current record database.

Black drums are a saltwater fish that can be found in Gulf and Atlantic state waters, according to the Florida Fish and Wildlife Conservation Commission.
(Julie Augustine)

“You have to have different pictures, different testimony and different witnesses,” Augustine explained.

“You put together a package and then you submit it online. Once it’s submitted, it’s voted on by their board. If they need any clarifying information, they’ll be back in touch with me,” she added.

“I’m not sure how long that process takes,” she said. “It’s in their hands now.”

Fox News Digital reached out to the International Underwater Spearfishing Association for comment.