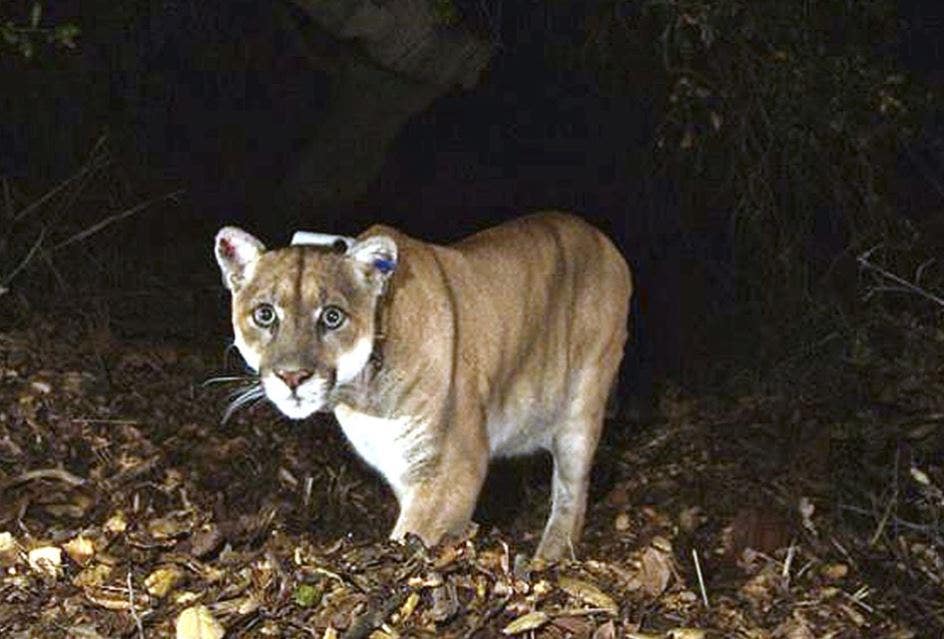 A dog was attacked and killed by a mountain lion while out on a walk Friday night in Los Angeles, with the famous P-22 believed to be responsible.

The incident occurred around 6:30 p.m. Friday night in the Hollywood Hills neighborhood and was captured on a home’s security video. A dog walker was seen walking two small dogs, and as they leave the frame, a mountain lion comes out of the brush, crouching as it follows them.

“He literally grabbed one of the dogs, pulled him so hard that he pulled him off the leash, and ran off with the dog in its mouth,” Warren Jason told FOX 11.

The mountain lion known as P-22 is seen in Griffith Park near downtown Los Angeles.
(AP)

The other dog and the walker were left unharmed in the incident.

The dog that was killed was a Chihuahua mix named Piper, who was rescued by its owner in 2014. The owner and everyone else in the neighborhood are familiar with P-22, the mountain lion that lives in the Hollywood Hills/Griffith Park area.

“He is always on my video feed,” one resident said. She noted that she never had any issues with the animal, but does not walk her dog at night because “coyotes are all around, so it’s not a good idea.”

Residents said they are familiar with the mountain lion known as P-22, as they often find him on their security cameras.
(animalsatmyfrontdoor)

Community members said they feel terrible about Piper’s death, but they are also concerned the attack could trigger backlash against the beloved mountain lion, which they do not support.

“The drought means there are less rabbits and other wildlife in the area, so P-22 is looking for food,” one resident said. “This is his home and we have to adapt.”

P-22, who was first documented by the Griffith Park Connectivity study a decade ago, has never been confirmed to have killed any pets. A Koala from the Griffith Park Zoo was found mauled to death in 2016, but P-22 was never blamed for that death despite his collar showing he was in the area.

The National Park Service told FOX 11 they believe P-22 killed Piper, but they have to confirm it was him through a tracking collar.

Residents also said they are confident P-22 carried out the attack on Friday, as they have him on their surveillance videos and recognize the collar.